Read this article at BernieTheFlumph,com!

Troika! is a weird and wonderful science-fantasy RPG from Daniel Sells based on the classic Fighting Fantasy rpgs from the UK. It's intended as a love-letter to Planescape but with a dedication to never explain anything abut the setting in the official books.

"Backgrounds" are an essential part of the character creation process, as they determine the skills and abilities your character starts with (but not what they end with). There's broad collection of strange backgrounds in the book, and the Troika fanbase has had a lot of fun creating and sharing their own.

I've been killing time by putting together my own backgrounds. It's pretty easy and very fun. When I get enough written up, I'll probably put them into a simple zine. Until then, here's the Veteran of the Time War. 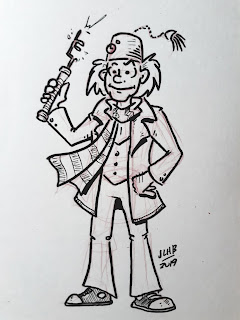 Veteran of the Time Wars

Proud, ancient Chronotopia was the most advanced civilization in the multiverse. Its noble chrononauts were dedicated to the observation and preservation of the timeline, never interfering with history except when they felt like it. Then the Null Collective came from the Darkness Between with a hunger to devour all of time and space. The Time War raged across a thousand multiverses, creating and destroying infinite realities over the course of a hundred lifetimes.

Now the Time War has ended. The Null Collective was erased, but Chronotopia was reduced to a ruined cinder floating in dead space. You are the only survivor. Now you’re in Troika with nothing but your trusty cosmic multi-tool and the smoking wreckage of your Impossibility Engine. Is this strange city some fragment of a forgotten realty broken off from an aborted universe? What is its connection to the Time War? No one seems to know.

Special:
Thanks to your people’s advanced evolution and connection to the Time Matrix, your body has remarkable regenerative abilities. If you die, permanently reduce your Luck score by 1 and give your character sheet to the GM. They will change three Advanced Skills on your sheet (retaining their current score) and give it back to you. At the end of the scene, you wake up with a new face and full Stamina. Describe your character’s new appearance and personality.
Posted by Josh Burnett at 6:56 AM

Email ThisBlogThis!Share to TwitterShare to FacebookShare to Pinterest
Labels: troika