That's right, February is going to be FLUMPHruary! (name pending)

Throughout February, I'm going to post an interpretation of the iconic flumph for a different game system. Want to add the flumph to your Stars Without Number or Hobomancer game? Watch this space to see how!

Four Fridays.
Four flumphs.
Maybe more if I get ambitious.

Stay tuned!
Posted by Josh Burnett at 2:08 PM No comments:

This post-apocalypse menace for Mutant Future was inspired by fuzzy childhood memories of an entry in the classic Book of Wondrous Inventions.

As the civilization of the ancients progressed, they connected more and more machines to their massive computer network. Even the most mundane appliances were programmed with virtual intelligences. It was only inevitable that, after the Fall, some of these machines would gain sentience and an evil disposition.

The popmasheen is usually found in the hallways of abandoned ruins. This robot resembles a large metal box of black metal with a glowing red front emblazoned with white runes of an ancient tongue. If approached by a creature carrying silver, the robot will speak in an dry, metallic voice “Please insert silver coins.” Close inspection will reveal a slot on the front of the machine, just the right size for a silver coin. The machine will continue to ask for silver coins until the party has none left. It will then remain silent and immobile, waiting a new source of silver.

If attacked, or if it's request for silver is ignored, the popmasheen will wobble forward on it's four stubby feet and attack! A port will open near the bottom of the robot, and the popmasheen will launch cylindrical metal canisters at its targets while droning "Enjoy! Enjoy! Enjoy!" It can attack three times a round, targeting three different targets. If a canister hits, it inflicts 1d6 points of damage. Each canister also has a 1-in-6 chance of exploding, splashing every creature in a 10' radius with brown acid. This acid inflicts 1d8 points of damage each round for 2 rounds. A save vs. poison will halve this damage.

A popmasheen usually holds 1d6x100 sp in its robotic gullet, plus any silver the party fed it.

Some of my players have important school stuff, so we have to take a break from Monsterhearts for a couple of weeks. To fill the gap last night, I ran Mutant Future, a gonzo post-apocalypse RPG in the Gamma World vein.

We only played for a couple of hours, but we had some pretty notable scenes as our team of mutant heroes explored the ancient clone lab.

I was reminded again why I love OSR games so much as opposed to 3.x D&D and Pathfinder. It's the whole "rulings not rules" thing. Take the first example with Durp tossing bad guys into his dimensional portal. If this was a modern D&D-esque game, first we'd have to check if the portal could be placed on a horizontal surface. Then we'd have to go through lengthy grapple rules in order to wrangle the monsters into the portal. A lot of page flipping and arguments. When the heroes shoved the soda machine onto the scraver, we'd look up rules for feats of strength, are attacks with improvised weapons, and damage by weight.

Instead, I used the OSR philosophy of "rulings, not rules" combined with the Apocalypse World "principle" of "be a fan of the PCs."

Durp wants to toss a bad guy into his portal? Fine. Make a normal to-hit roll at -4. Got him? Great, now make a regular Strength check to chuck the bastard in. Oh you rolled a natural 20 on that to-hit roll? Then forget the Strength check, you toss him in no problem!

Wanna shove the soda machine onto the monster? Well we said the scraver's right in front of the machine. All three of you are shoving? Don't bother rolling, you can push it over. The scraver will make a save vs. paralysis to see if he gets out of the way. Nope, it falls on him! Now how much damage does that do? Well the soda machine was a 10 hit die monster made of metal, 10d6 sounds right to me! Splat!

So quick, so simple, so much more fun. We never would have tried this with some modern games. Love it!

So yeah, I really ant to run an on-going Mutant Future game soon. My players were concerned by the lack of healing in the system. I think I might moosh Mutant Future together with Labyrinth Lord and make something a lot like Thundarr or Ralph Bakshi's Wizards. The lower-damage monsters combined with the availability of clerics might make them feel better.

Posted by Josh Burnett at 2:24 PM No comments:

It's no secret that I love maps. I love looking at them, I love exploring them, but most of all, I love drawing them. To keep my cartography skills sharp and to share my mappy fun, I've decided to post a new map each Monday. It might be a dungeon, a building, or a geographic location. It'll change around a bit.

Also, I don't at all pretend this is an original idea (Dyson makes beautiful maps!)

So let's start things off with The Temple of the Bat God! 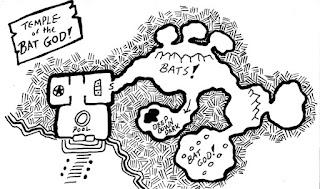 Steep stairs lead to the temple, which is carved into the side of a dark mountain and is occupied by innocuous priests. A secret door behind the altar hides the entrance to a series of caves deep within the mountain. The caves are occupied by giant bats and a monstrous Bat God himself! A large black pit leads to the Deep Down Dark, home to all manner of subterranean evil.
Posted by Josh Burnett at 5:24 AM No comments:

We have to put our weekly Monsterhearts game on pause for a couple of weeks. I want to run something on the other side of the RPG spectrum to fill the gap, and I think I've settled on Mutant Future, a Gamma World homage from Goblinoid Games.

I needed some relatively low-HP humanoids to use as antagonists for the adventure I have planned. None of the monsters in the Mutant Future book were exactly what I was looking for, so I made up my own. Let me introduce you to the Scravers. Gotta' love me some rat-people. Scravers are squat humanoid rodents that resemble bipedal shrews. They are known for their greed, cruelty, and cowardice. Their large, thick fingered hands are equipped with retractable claws that secret a paralytic venom. Scravers gather in small semi-tribal gangs lead by the strongest and cruelest of their kind. They prefer to live underground, in ruins, or the dark parts of the wasteland, trusting their echolocation and sharp sense of smell to guide them. Gangs of scravers often raid small settlements and caravans for food, loot, and salvage.

Scravers are cowardly, and prefer to attack opponents from a distance with bows, crossbows, or salvaged firearms. If forced into close combat, they attack with two claws. An opponent wounded by a claw attack must save against paralysis or become paralyzed for 1d6 rounds (Class 10 poison). The scravers' echolocation grants them a +2 to hit in combat. If a fight goes against them, scravers will use their venom to paralyze their foes and flee.

For every 6 scravers, there will be one 5HD sub-boss with AC 6 (studded leather). For every 18 scravers there will be a 6HD boss with AC 5 (chainmail) who saves at L4, and inflicts +1 damage in combat. There is a 50% chance that a boss scraver will be accompanied by a 5 HD savant with 1d3 beneficial mental mutations.

Scravers often breed and train giant rats for use as guard animals.

Posted by Josh Burnett at 4:53 PM No comments:

It's the Bernie the Flumph Show!

Flumph's were introduced in the 1981 D&D accessory Fiend Folio. These Lawful Good critters resemble floating jellyfish with acidic spikes and a stink-spray defense mechanism. Nobody seems to like flumphs, but I do. I think they're cool.

I didn't start playing D&D until the arrival of Second Edition (I was a Champions guy). I was introduced to the flumph with the Monstrous Compendium Annual Volume 2. This book introduced the concept of monastic flumphs—flumphs with cleric levels—a concept that hasn't carried over to any of the current version of the flumph. I was immediately taken with the flumph. The thought of good-hearted floating jellyfish monsters with a clerical powers just appealed to me. I don't know why. Maybe it's because they reminded me of Healie, Ragnar's buddy in my favorite old NES game Dragon Warrior IV.

Flumphs have popped up here and there in D&D 3.x and Pathfinder, but they're still considered something of a joke. But not here. Here flumphs get the respect they deserve.

Who is Bernie the Flumph?

Back in the mid-late 90s, I spent a lot of time online in roleplaying chat-rooms. After years of dealing with elder vampires, ascended gods, and level-20 antipaladins, I decided I wanted to play something different. A low-powered, inoffensive, friendly, but interesting character. Thus was born Bernie the Flumph, a first-level flumph cleric, sole survivor of the Grell conquest that destroyed his homeland. Bernie didn't get much play, but he was always a refreshing break from power-playing.

Bernie would show up years later as a reoccurring NPC in my D&D 3.0 Dragonstar campaign. Wayfarer Station (my PCs home port) was a corrupt space station in a bad part of space. Bernie and his friend T'odd (another flumph) were the only representatives of lawful good on the sleazy station. They ran a small laundry business and maintained an even smaller shrine to the Father (a lawful good deity). Bernie & T'odd's Temple and Dry Cleaning was the place to go to both heal your wounds and get the blood stains out of your armor.

Bernie hasn't seen much use since Wayfarer Station, but when I needed a mascot for this RPG blog, Bernie seemed to be the flumph for the job.

I'm Josh Burnett. I've been playing RPGS for 25 years now, always experimenting, always coming up with new things. I'm part of Hex Games, creators of QAGS, and have helped produce several games with them. I'm also an illustrator and cartoonist. You can see more of my creative stuff on my Stegosaurus Studios blog.

In recent years, my gaming taste has spread across a wide variety of tastes. One one side of the spectrum, I love new-agey high-narrative “story games” like Prime Time Adventures. On the other side of things, I equally love “Old School Reniasance” games like Labyrinth Lord. For reference, two of my all-time favorite games are Dogs in the Vineyard and Rules Cyclopedia D&D.

So what's this blog about?

This blog is a spin-off of my Stegosaurus Studios blog. I want to refocus that blog on purely creative endeavors. Bernie the Flumph will focus on RPG blogging—musings on theories and ideas, sharing inspirations, actual plays, house rules, adventures, monsters, resources, and all that sort of things.

While the blog ramps up, content-wise, I'll probably  repost a number of bits and bobs from the Stegosaurus blog. There's some cool stuff there I'd like to share!