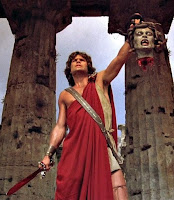 Before I got into Elric or the Gray Mouser, well before Tolkien, and long before I was into D&D, I was into Greek Mythology. The Chicagoland UHF station I grew up with would play old Hecules movies on the odd weekend, and Clash of the Titans seemed to be on constant ration on HBO. Books from the school library and Time/Life helped feed the love of heroes and monsters.

In the past couple of months, I’ve had weird bits of synchronicity with heroic Greek myth. The new version Agon came out in print, Blood of Zeus dropped on Netflix, a new season of Great Greek Myths came to Prime, and Eldritch Fields started actual play posts of Mazes & Minotaurs.

So now I’m primed for some heroic Greek gaming! I know there are several “mythic Greece” RPGs out there, but I’ve never had a chance to play any of them. I read thru both Agon and Mazes & Minotaurs (again), but then I thought to myself “You know what would be an interesting system to use for some mytho-heroic gaming? Dungeon Crawl Classics!”

Gorgon Crawl Classics is a DCC setting I’m low-key working on while I finish up other projects. I’m not sure what the final form will take: zine, full book, or just dead on the vine. My plan for now is to have fun writing stuff for it and run some test games at on-line conventions and for friends. Here’s the outline of things I have (thus far) planned.

Hubris: a mechanic much like Fleeting Luck or Mojo. You add bonuses to your roll but risk getting smote down by the fickle gods.

Heroic Origins: replacing both the 0-level funnel and birth augers.

Modular Armor: Mix-and-match what your warrior is kitted out with.

Jason and the Argonauts

Hercules in the Haunted World

Hercules Against the Moon Men

Medusa Against the Son of Hercules

Clash of the Titans

I’ve been playing Ryuutama with Leighton, Anne, and Peter for several months now. Ryuutama is a charming, pastoral RPG about nice people travelling from town to town, meeting new people, helping with their problems, buying and selling trade goods, and seeing the sights. With the real world on fire and everything, we all decided that playing something nice and pleasant was what we really wanted. Ryuutama has fit the bill nicely. It also lets me indulge in one of my favorite GM activities—creating quirky little villages and filling them with eccentric NPCs.

That brings us to the village of Grizzlethorpe and their annual festival, the Running of the Bears.  You know how in Pamplona, Spain they run bulls through the streets while the citizens run in front of them to prove their courage? It’s just like that in Grizzlethorpe, but with bears.

Isn’t that dangerous? Yes, it is! Don’t people get brutally injured, scarred, and maimed? Yes, they do! But the people of Grizzlethorpe are proud of their tradition and are happy to include willing visitors in the festivities.

And the bears? Why they love it of course. These humans willingly bring them into their town and let them run amok and beat people up. The bears have a good thing going, so they don’t ruin it by killing (many) villagers. Just some good-natured maiming.

The Running of the Bears takes place in four legs:

Leg 1: The participants try to outrace the bears. Roll Dex+Dex (Diff: 8) to put some distance between you and the bears or suffer 1d10 damage from bear mauling!

Leg 2: The bears coordinate their chase and try to pen you in! Roll Int+Dex (Diff: 8) to avoid getting flanked by bears. Take 1d10 damage if you fail, as the bears gnaw on you some more.

Leg 3: The villagers have taken down the bridge that crosses the creek that runs through town. What a fun joke! Roll Dex+Str (Diff: 10) to leap over the creek. If you fail take 1d10 damage as a bear violently smacks you across to the other side.

Leg 4: You’re almost to the safety of the finish-tower where the villagers will pull you up to safety. Roll Dex+Dex (diff: 9) to get there before the bears catch you! Take 1d10 damage and suffer the Crippled: 6 condition if you fail.

My GM Notes for the village of Grizzlethorpe:

Lots of woodwork carved with images of bears and swans. Red and green paints in abundance.

Robust, friendly people of Gladian stock. Many with horrible scars. Outgoing and amicable.

Town council consists of the the oldest resident, the elected sheriff, the head woodsman, and the winner of the Running of the Bears. 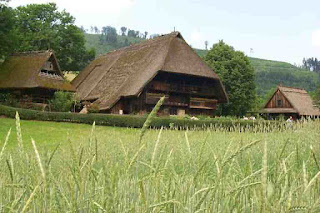 Shrine to Rowenna, the Girl Hero