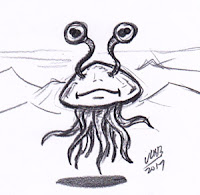 Posted by Josh Burnett at 10:08 AM No comments: 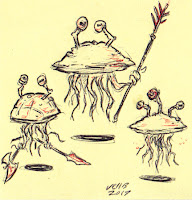 Today I add flumphs to Geoffrey McKinney’s Carcosa. The specific version of Carcosa I’m using comes from McKinney’s four Carcosa AD&D modules, not the core Carcosa book. These gazetteers (which you should go buy) make use of traditional AD&D classes and alignments. They also make references to the Elder Gods and other forces of Good on Carcosa. I think fumphs fit in nicely.

Flumphs, Carcosan
Flumphs are floating, jellyfish-like aliens stranded on Carcosa after their home planet was destroyed 2000 years ago by intergalactic minions of the Great Old Ones. They now make their home in hidden enclaves and monasteries nestled underground or hidden within mountains. Flumphs are completely devoted to the Elder Gods and are one of the few powers of Good on Carcosa. They are generally distrustful of Men, but are willing to help any heroes dedicated to destroying the Great Old Ones.

Flumph, Ulfire
Number Appearing: 1-4
Armor Class: Upper surface: 0; Underside: 8
Move: 6”
Hit Dice: 5-7
Number of Attacks: 1
Damage/Attack: 1-8 plus 2d6 acid
Special Attacks: Holy fluid spray, spells
Special Defenses: none
Magic Resistance: standard
Intelligence: High
Alignment: Lawful Good
Size: M (4’ diameter)
Ulfire flumphs acts as the leaders and spiritual guides of flumph society. They have dedicated their lives to the Elder Gods and can cast spells and turn undead like a lawful cleric with a level equal to their Hit Dice.
An ulfire flumph attacks with the acid-laced spikes hidden within it’s tentacles. Once per day, it can also spray a pearlescent fluid in a 60’ arc with a range of 20 feet. This emission functions much like holy water, and inflicts 2d6 points of damage on any undead or Spawn of Shub-Niggurath that fails a save vs. poison.

Flumph, Dolm
Number Appearing: 2-8
Armor Class: Upper surface: 0; Underside: 5
Move: 9”
Hit Dice: 4-5
Number of Attacks: 1 or 2
Damage/Attack: 1-8 plus 1-4 acid or by weapon
Special Attacks: Paladin abilities
Special Defenses: Paladin abilities
Magic Resistance: standard
Intelligence: Average
Alignment: Lawful Good
Size: M (3’ diameter)
Dolm flumphs form the militant arm (tentacle?) of flumph society. They act as bodyguards to the ulfire flumphs and conduct raids against minions of the Great Old Ones. A dolm flumph has all the powers of paladin (except for Summon Warhorse) with a level equal to their Hit Dice.
Dolm flumphs are the only flumphs trained in the use of weapons. They can hold two two-handed weapons in their tentacle masses (usually spears or pole arms) and can attack with both. Without weapons, a Dolm flumph can still attack with the acid-laced spikes hidden within its tentacles. It lacks the stink-spray attack of normal flumphs.

Flumph, Jale
Number Appearing: 1
Armor Class: Upper surface: 0; Underside: 8
Move: 6”
Hit Dice: 4-9
Number of Attacks: 1
Damage/Attack: 1-6 plus 1-4 acid or by spell
Special Attacks: spells
Special Defenses: none
Magic Resistance: 25%
Intelligence: High-Genius
Alignment: Chaotic Good
Size: M (2’ diameter)
Aside from their color, jale flumphs are distinguished by their third eyestalk. Their over-sized, multi-faceted third eye allows the jale flumph to see invisible objects or beings within 120 feet.
Jale have dedicated themselves to the study of sorcery and are exceedingly rare. While other flumphs see them as heretics for aligning themselves with Chaos, their devotion to Good is without question. Still, no flumph enclave will tolerate more than one of these magic-users in their midst.
Jale flumphs have weaker spikes and acid than other flumphs, and have given up their stink-spray ability. However, they can cast spells like a Magic User with a level equal to their Hit Dice.

Lurffamyrm Sanctuary (3720)
Flumph Citadel
Population: 37 normal flumphs (from the Fiend Folio), 3 ulfire flumphs, 7 dolm flumphs, 1 jale flumphs
Alignment: LG
Resources: Fungal Spices
Leader: Barniabos (7HD ulfire flumph)
Significant NPCs: Korbuurn (5HD dolm flumph), hawkish leader of the Dolm Spears; T’odd (7HD jale flumph), chatty sorcerous researcher.
Lurffamyrm Citadel is a citadel made of metallic, interconnected dome-like structures nestled within the mountains. There are no paths leading to the citadel (the floating inhabitants don’t need them) and is very difficult to reach on foot. The citadel is home to 64 flumphs, led by a ulfire flumph named Barnibos and his two under-priests. 37 normal flumphs perform daily benedictions to the mysterious Elder Gods and tend to the cavernous spice middens beneath the citadels. The Sanctuary is guarded by a troop of dolm flumphs called The Dolm Spears. Their leader, Korbuurn wants to take a more pro-active stance against the green men in the Grotto of Azathoth (3718). He has a space alien plasma rifle (5-30 damage) that he believes will give his warriors the edge they need. T’odd, the jale flumph Magic User, keeps a library of dangerous lore in a disused storeroom near the spice middens. He will gladly “talk shop” with any visiting good-aligned magic users--an all-too rare opportunity.

Today I present to you the Flumph for Ryuutama (a delightful game I intend on reviewing in the near future.)

Flumphs are friendly and peaceful little creatures that came down from far-off stars. They resemble rubbery floating jellyfish with googly eyes on the ends of flexible stalks. Shy and secretive, they make their homes in hidden shrines across the world. They will gladly help any travelers who are lost or injured. Though peaceful, a threatened flumph can defend itself with a noxious stream of poisonous acid.
Special Abilities: Posion - A creature hit by a flumph's attack suffers [poison: 4]. Blessings of the High Ones - The flumph knows all Spring Magic spells, plus the Cure Touch spell.
Posted by Josh Burnett at 8:01 PM No comments:

Well hey, gang! I’ve decided to bring back Flumph Friday February this year. Each Friday this month, I’ll post the beloved Flumph, statted out for a different game system. All of these conversions are based on my interpretation of the Monastic Flumph from AD&D 2nd Edition.

This year I’m kicking off Flumph Friday February with Fate Accelerated! (That’s a lot of Fs!)

FLUMPH!
High Concept: Funny Little Floating Alien Pilgrim
Weakness: Lawful Good
Other Aspects:
“May the Blessings of the High Ones be upon you.”
Noxious Chemical Spray
Everybody’s Buddy

Stunts
Because I can tap into the healing power of the High Ones, once per session I can remove all the stress from one creature I can touch.

Because I produce a variety of noxious chemicals, I get +2 to Flashily Create Advantages related to acid, blindness, or nausea.

Because everybody trusts a Flumph, I get +2 to Carefully Create Advantages or Overcome Obstacles related to trust or friendship.

Stress: OOO
Posted by Josh Burnett at 3:35 PM No comments: