A good sized map of several chambers branching off from a large central cavern. 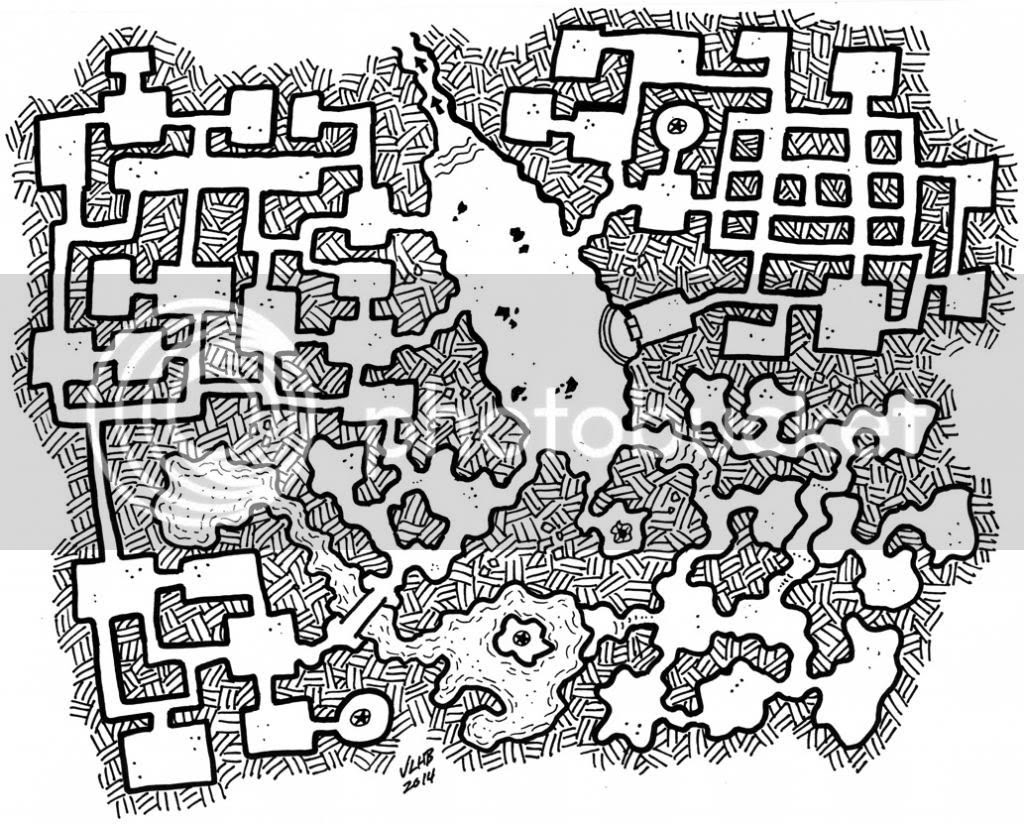 Posted by Josh Burnett at 3:53 PM No comments:

I've never done one of these "side-view" dungeon maps before. People seem to like them.

The Cavern Kingdoms are a collection of rival subterranean realms. The Jungle Cave is lit by sunlight filtered from the surface by shafts and seams of suncrystal. It is a land of massive trees and dinobeasts. The Fungal Kingdom is lit by the pale blue light of luminescent mushrooms. It is ruled by the Mushroom Princess, an orphaned human girl raised by shroomen. The Vaults of the Dead is a lightless realm inhabited by warring tribes of ghouls. The Lava Temple is a sprawling manse of adamantite surrounded by a sea of magma. The alien Fire Elves perform their uncanny rights here. 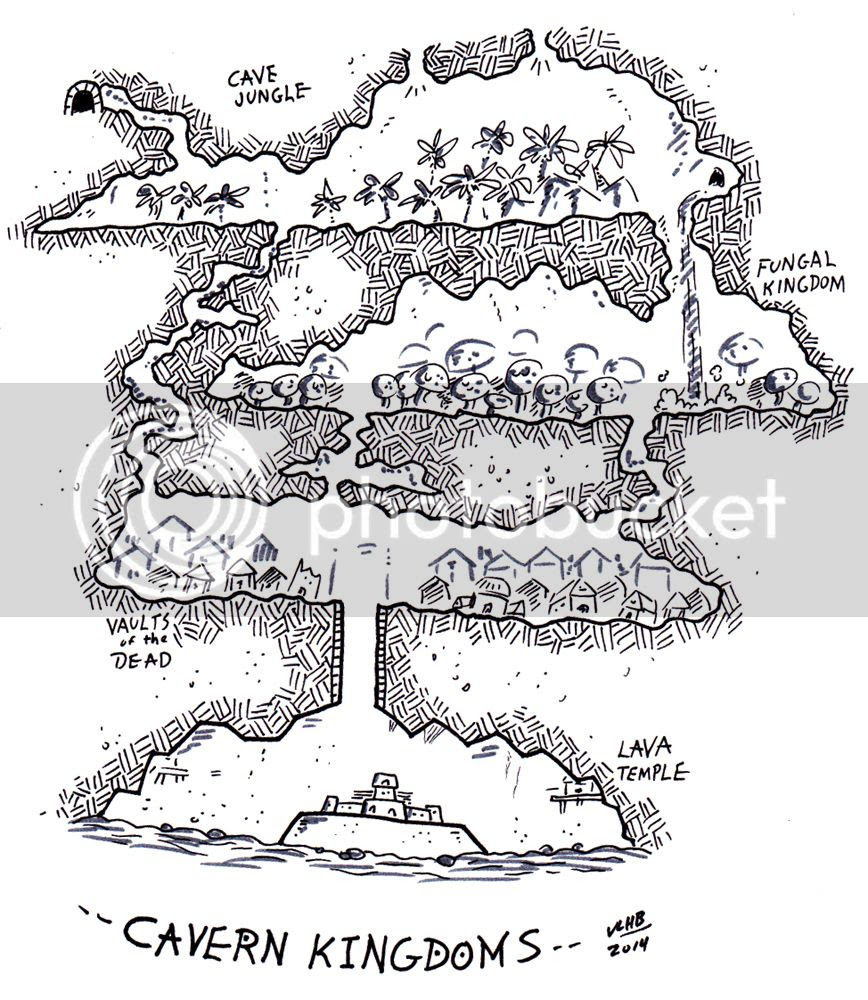 Posted by Josh Burnett at 1:39 PM No comments:

The Games I Play

I play a lot of RPGS these days, more than I ever expected to play at one time. Skype and Google Hangouts have been both a blessing in a curse. I've never been involved in so many games at once, but now it's pretty much all I do. RPGs take up almost all my free time. It's kind of an interesting problem to have. I love all my games, but I might be getting close to some sort of "critical mass." I'm not entirely sure how sustainable this is.

So here's what my RPG life looks like right now. These are just my regular games, too. It doesn't count things like the irregular Pathfinder game I'm in.

Monkey Took My Jetpack Podcast - I play every week as part of this podcast. It's my longest-running online group, and we meet every week over Skype. We just finished an excellent Dresden Files game and have just started a new Talislanta campaign.

Porcelain Llama Theater Podcast - I also play every week as part of the Porcelain Llama Theater podcast, run by Trilobite (also from MTMJ). This game also uses Skype. I should point out that these Skype games don't use any kind of virtual table-top, and all the dice rolls are on the honor system. It's never been a problem. We just wrapped up a "Epidemic Thriller" campaign using Fate Accelerated (Machines of Loving Grace), and are brainstorming our next game.

Carcosa By the Numbers - +Doyle Tavener runs this excellent Carcosa hexcrawl every-other week in Google Hangouts. He uses Lamentations of the Flame Princess with all the funny dice rules from Carcosa. Our group of escaped slaves started the game naked, hungry, and penniless, and we've had to fight and struggle for every iron knife and dried mushroom. It's awesome. This game tweaks all my OSR buttons for exploration, resource management, and straight-up weird shit.

The Defiants - +Stacy Forsythe runs this Smallville game every other week over Hangouts, and so far it's been a lot of fun. We play a group of high school students in Defiance, Ohio who have just gained superpowers in a world where that kind of thing doesn't usually exist. My guy, Jacob Mead (AKA Bee Major) has the power to summon and control bees. We have a lot of fun playing up to the tropes of petty teenagers with all the adolescent drama and bickering that comes with that.

Isle of Abaddon - This is the Labyrinth Lord (with a lot of LotFP and house rules) game that I run every other week over Hangouts. The island of Abaddon disappeared three hundred years ago. Three years ago it returned from parts unknown with mysteries to be unlocked and fortunes to be won. I've enjoyed runnign this game, and it's let me use a lot of things I've developed for this blog.

My Sunday Home Game - This is my one regular game session that actually meets in my home with face-to-face players. My wife and I play with a group of our friends every week. Right now I'm running "Dresden 1888," a Dresden Files campaign set in Victorian London. I'm also setting up to run a Star Wars: The Old Republic game using Fate Core. My wife has also set up a Fables game using Fate Accelerated. Lots of stuff going on there!

Posted by Josh Burnett at 10:07 AM No comments: