I will soon wrap up my Warhammer 40K: Wrath & Glory campagin and move onto running Lamentation of the Flame Princess. Not surprisingly, it will be set in a weird-fantasy version of Europe at the height of the 30 Years War. Originally I planned on including Dwarves and Elves, describing them as remnants of pagan faerie empires or whatever. I soon decided, though, that while I wanted to keep the demihuman classes I wanted to make them different from the classic fantasy standbys. Reskinning was the way to go--keep the classses mechincally the same (or with slight tweaks) and change all the fluff.

Changing the Halfling to the Outlander was my least creative change. A lot of people have turned the Halfling into some kind of ranger or explorer class. Their bonuses with ranged weapons and natural woodland abilities make this easy. I decided to stick with the precendent and make them "Outlanders," often Native American or African tribesmen, but also buckskinners or mountain men. Mostly, I just thought Mani in Brotherhood of the Wolf was always cool.

For the Dwarf, I still wanted to keep the class hardy and crafty. If I could inject some Hollow Earth weirndess into their subterranean kingdoms, all the better. Molemen were the obvious choice. They are heavily inspired (that is, lifted almost directly) by mole-men John Hodgman writes of in More Information Than You Require. This is not the first time I've stolen his Molemen.

For Elves, I chose to turn them into Serpentblood. I've always loved the Yuan-Ti in D&D, and I've always been fascinated/amused by the hidden reptilian masters of UFO lore. Of course, the Snake Men of Valusia and King Kull were also an influence. These are all the same reasons I brought the Sneaky Snakes into Hobomancer. Also I'm pretty sure Selena from the core LotFP cast is supposed to be half-snake or something. Anyway, replacing elves with decendants of extra-dimensional reptilian sorcerer kings lets me add some weird conspiracy stuff to the campaign.

Here, then, are the class write-ups...

Outlanders are warriors and survivalists specialized for operating in the wilderness and on the frontier--the lands outside supposed "civilization." Many outlanders are from places that Europeans would disparagingly call “primitive”—often uncolonized America or Africa. Some European frontiersmen also qualify as Outlanders (your mountain man or buckskinner types).

The Outlander is a reskin of the LotFP Halfling class. In most ways they function identically to that class, except that they have no restriction on weapon sizes and only receive the +1 bonus to AC if they are lightly encumbered or less.

Molemen are hideous subterranean humanoids with hunched bodies, withered, rodent-like faces, translucent skin, and borderline-heretical beliefs in liberal democracy. They can pass for ugly, stunted humans. Most people just assume they are foreigners from whatever country their homeland hates the most (“Beady eyes, weird teeth… the man’s obviously Welsh”). Molemanic women are just as hideous as their menfolk. High-ranking Molemen often wear powdered wigs. Molemen will introduce this fashion to European nobility in the latter half of the 17th century.

Molemen possess a sophisticated culture and civilization deep below the Earth that values industry and learnedlness. Molemanic societies are sexually egalitarian and comprise some of the few functional democracies in these benighted times. Sadly, these subterranean republics are currently experiencing some unspoken catastrophe. Many exiles and refugees have made their way to the surface world. In 1825, the Molemen will form an alliance with the American president, John Quincy Adams, who well lend them aid and arms in an attempt to reclaim the Hollow Earth.

Mechanically, Molemen are a reskin of the LotFP Dwarf class and function exactly like that class, including combat options and carrying capacity. In my campaign, I have gotten rid of the Architecture skill. Dwarves (and Molemen by extension) replace it with Tinkering. 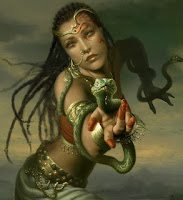 Serpentblood are descendants of the extradimensional reptilians that once ruled the Earth from the lost empire of Valusia, back when mankind was young. Modern serpentblood little resemble their ophidian forbearers, but often grow more snake-like as they grow in power. Serpentblood are normally raised unaware of their heritage, and the xenogenetic traits often skip several generations. Around puberty, a newly awakened serpentblood is visited in their dreams by their reptilian ancestors, who make them aware of their alien birthrights and direct them towards other of their kin for training. As decendants of alien sorcerer-kings, all serpentblood have a natural talent for magic and combat. Awakened serpentblood have several conclaves hidden in the jungles of South America and central Asia, as well as Greece and the mountains of Romania.

Mechanically, Serpentblood are a reskin of the LotFP Elf class. In most respects they function exactly like that class, including spellcasting and combat ability. They are chaotic in alignment and share the same vulnerability to holy water and the like. Their natural Search ability is due to their semi-functional jacobson’s organs. Serpentblood often become more snakelike as they grow in power. At 2nd level and each level thereafter, roll a Save vs. Magic (using the saves for the new level). If the roll fails, roll 1d8 on the chart below to determine what serpentine trait manifests. Repeated instances become more pronounced.


We're coming up on the last couple of sessions of out Warhammer 40K: Wrath & Glory campaign. The campaign's going to be shorter than I orignally intended--it's not quite hitting my creative buttons as much as I'd like, and I'm eager to start my historical horror-fantasy LotFP campaign. The warband is going to scour the lost city of Yggdrail on the planet Ymir, then I think we're going to put them on the shelf for a while. It will be a good adventure to end the campaign on.

All that said, I'm pretty plleased withthe NPC crew I came up with for the Golden Humongous--the voidship the warband serves on under the command of Lord Captain Gabriel Galahad.

"WWPHITM" (pronounced WHUP-a-tum) stands for "Who Would Play Him/Her in the Movie." It's a useful character stat Ipicked up from my work with QAGS.

Posted by Josh Burnett at 7:31 PM No comments:

Voyage of the Golden Humongous, part 2

Between conventions, and work, and people getting sick, we haven't had a chance to get back to our Warhammer 40K: Wrath & Glory game for several weeks. But it looks like Fate is smiling on us finally, and we're going to get back to the campaign tomorrow.

Our last session was pretty short and direct, as the war band continued to look for the missing techpriest, Thermius Stembolt 57. Looking through the ruins of Stembolt's workshop-shrine, they found the remains of the techpriest's gun serviotrs and found his damaged servo-skull. Nero performed the proper repair litanies and was able to repair the skull as well as access some of its data recordings. The recordinds showed Stembolt barricading himself within his work-shrine before being grabbed by giant crab-claws and drug away. Thinking quickly, the warband was able to hack the servo-skull and use its connection to its master to use the servitor as a guide-dog to lead them to wherever Stembolt was drug off to.

As the warband exited the work-shrine back into the filthy hive alleys, they were suddenly attacked on three sides by several bobs of Crazed Slaanesh Thrill Killers.


This was the PCs' first big combat, and they chewed through the cultlings pretty quickly. A timely warp surge from Ayza the scaavy psyker's paralize power took out half of them in one burst. Chainswords and bolters took care of the rest.

Pressing on, the warband followed the servo skull deeper intot he underhive, eventually winding their way into a narrow passageway filled with heretical graffitti. In an abandoned storehouse, they discovered a discarded servo arm and a tech-priest face plate. Bad signs for old Stembolt.

Moist, glowing, underground passages led to a sticky chamber full of discarded matresses that stank of opium and skin. Stembolt-57 the techprist lay slumped against the side of a well, his exposed face glistening metal and raw bone with his eyes rolling senselessly. Two distressingly aluring daemonettes languidly cut long strips of skin from his exposed chest.

“I had hopes that Galahad would have come here himself, but I should have known he’d send lackys instead. Never do yourself what you can have underlings do instead. Speaking of… ladies…”

The fight was fast and furious. Toska the Death Cult Assassin took out one daemonette with a single critical hit from her sniper rifle. But the daemonette's sister stuck back with horrific speed and put dow the assasin with her own critical. After that it was a tense but simple exchange of blows while the rest of the warband took out the daemonette and her thrill killer reinforcements. Commisar Elizabeth quickly stabilized the sticken Toska.

After that it was all clean-up. Techpriest Stembolt is brought to the Golden Humongous. With his over-clocked emotional processor, he is vocally and exuberantly grateful for his rescue and happy to be reuinted with his old friend the Lord Captain.

The first short adventure of our Wrath & Glory campaign went fairly smooth. The system's a bit kludgy, but it get easier with each session. I'm not sure how long I'm going to run it (I'm itching to start some Lamentation of the Flame Princess). The next adventure will be a bit more involved and will center around exploring an abandoned city on a dead planet.