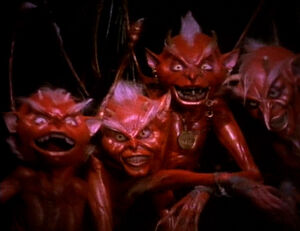 Wander deep enough into the Wyrdwood and you’ll find a small village full of devils. The devils down in Devil Town know how to forge blades out of your own fears.

You’ll need to pay the devilish smith in advance, but he will cut you a nice discount.  The knives bring more misery into the world, after all. After you give the devil your coins, confess your own worst fears aloud. The smith draws those fears out of you, like gray spun sugar, and coalesces them into a dense alien material, not unlike glass, metal, or ceramic. The smith forges this fear-stuff into a knife with aesthetic aspects reminiscent of the fears that created it. A blade forged from a fear of fire might be bright orange in color with flickering edges of yellow. Fear of abandonment might produce a blade that weeps tears when left unattended.

You are now immune to fear, both mundane and magical. But fear is part of what makes us human and keeps us safe, so you also lose 2 points of Charisma and 1 point of Wisdom forever.

The knife inflicts damage like a dagger (1d4). In your hands, a knife made from your own fears is +2 to hit and inflicts an additional 1d8 psychic damage to living, feeling creatures.

Draw a pentagram on your character sheet. Write “NP” in the middle. Fill in each arm as you gain Nightmare Points.

If you use the fear knife to hurt a living, thinking, feeling creature, then when you sleep that night you must make a 2d6+WIS roll. 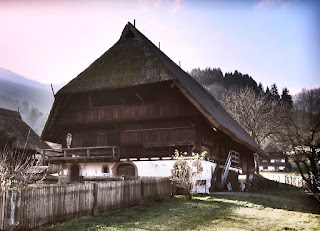 The Goat & Raven Public House is owned and operated by the dwarf Stanislav Arn. The house features a large, open common room with a balcony running along three sides that leads to rentable rooms. Its dark wood walls are covered in hunting trophies—antlers, claws, stuffed heads, broken spears, etc. A large crossbow with a wolf motif hangs behind the bar (Wolfkiller: heavy crossbow +2, +1d8 damage to beasts). A raven sculpture made of worked iron perches in the rafters. Pens behind the building house Stanislav’s prized goats. Stanislav’s house special of black bread and spicy goat stew with turnips is particularly well regarded.

Stanislav Arn (Dwarf 5, Lawful) retired to Wyrdwood over 40 years ago for a quiet life after a career as an adventurer. He is tall for dwarf (5’3”) and thinner than most of his species, suggesting human blood in his ancestry. Stanislav generally maintains a professional and stand-offish demeanor but is suffers occasional bouts of melancholy. His few close friends say his taciturn facade hides a generous nature and wry sense of humor.

Stanislav’s hands are thick with scars and callouses to the point that he can reach into his ovens and grab hot kettles without gloves or other protection. “Peac” is tattooed across the knuckles of his right hand, and “Qiet” is tattooed across the left. He tolerates neither ruckus nor fracas in the Goat & Raven, and he is more than happy to let his fists enforce this rule (2 attacks per round, 1d4+1 damage each). It has become something of an informal rite of passage among the young men of Wyrdwood to get beaten up by Stanislav Arn.

Stanislav was married to Luscilla Gull, a human woman and member of his old adventuring party. She died of an unknown illness five years after she and Stanislav retired to Wyrdwood. Village rumor says that Stanislav buried her with a fortune in jewelry and treasure. Luscilla’s grave lies in the cemetery behind the Gray Chapel. Stanislav interred her coffin beneath an elaborately decorated burial vault. Hand-crafted and tear-stained by a grieving dwarf, the vault is indestructible my mortal means. It requires a combined Strength of 50 to lift the vault off the coffin. Luscilla’s body is bedecked with 3000gp worth of gold and jewels. Should someone rob his dead wife’s grave, Stanislav will make it his life’s work to kill the thief.
Posted by Josh Burnett at 2:12 PM 1 comment: