I continue to develop Pangloss for my eventual D&D 5th Edition game. Clerics have always been one of my favorite classes, so I need to put together some deities for them to follow. The actual gods in a fantasy setting do not interest me much.  I am more interested in how their religions influence the cultures of the world. The gods and religions here aren't fully developed or greatly detailed. I just wanted to put together enough info to give my players the basics. I expect they will become more fleshed-out as the game progresses, especially for the faith of any clerical PCs.

Also, these are all human-centric religions. I’ll cover demihumans and their beliefs later.

In Pangloss, the gods are unknowable cosmic entities. Clerics pray to them and receive spells in return, but there is no solid evidence that the gods (as their churches depict them) actually exist. There are many gods in Pangloss, but they are not a unified pantheon. Brahma and Zarthura, and Thantogrim do not hang out in the same mead hall on the top of some mountain. For the most part, individual gods don’t associate with each other.

“And so Death created time so things could grow that It would eventually kill.”

Not really a deity, but personified cosmic force. All human cultures pay homage to Death Itself (also called The Harvester, The Unwelcome Guest, or simply “Death”). Death has priests, but no clerics. Death does not answer prayers or grant spells. Other Death gods (Unastre, Thantogrim, Morrigon) are considered priests of Death Itself. All major cities have a temples dedicated to Death, where silent priests function as morticians and perform funerary rites.

The official religion of Uth-Goliad is the Holy Couple of Brahma and Unaste. Chalice and Hyperia have also grown in popularity among the common folk. Official Church doctrine states that Chalice and Hyperia were human worshippers of Brahma who were raised to godhood after death, even though there is no proof of this.

In the rural areas far from the cities, many peasants still worship Beoren, Baphomet, Gromm, and Hrothgar.

The church of Zarthura wields huge influence in Madyan. Foreign religions are accepted under the progressive rule of the new king, but are heavily taxed. The gnomish ancestor cults continue to grow as more gnomes migrate into Madyan.

Everyone has heard of the Thousand Gods of Vancia. Most Vancians can only name a hundred or so. The Gods of Vancia use human souls as currency, and no Vancian knows which god will have possession of their soul in the afterlife. A typical Vancian pays homage to whatever god is appropriate for a given situation, while doing their best to avoid insulting any other gods. Vancian churches are jumbled, crowded affairs, where twenty clerics of twelve different gods might share the same building space. Clerics do not have a lot of prestige in Vancia. Temples to Vancian gods are rare outside of the city.

As might be expected in the border country, a wide variety of gods, spirits, and pagan forces are worshiped in the Marchlands. The free city of Horizon boasts the largest temple to Hyperia in Pangloss. The various druid communities in the wildlands worship Beoren, Baphomet, or the animistic forces of Nature itself.

In these wild countries, many of the barbarian tribes still worship pagan animal totems. Grendil is the homeland of Hrothgar, and his worship is very popular there. Beoren (especially in his “Grandfather Bear” aspect) is also well-loved. Gromm and Grandfather Frost are worshiped in the colder and more mountainous areas.

The Realm of the Ashen Queen

Empress Salandra was a worshiper of Moloch, the god of tyrants and law. After the Night of Fire, many cults have risen in her lands, but the the Brotherhood of Cinders still revere Moloch and their undead empress.

The pious of Xian-Zhu follow the Bodhivistas--humans who have mastered a specific philosophy (Domain) to such a degree that they have cast off mortality and become ascended beings. The Bodhavistas are not concerned with alignment; it is the cleric’s dedication to their philosophy that is important.

Brahma (LN)
Brahma was a human hero who freed humanity from the Hellkings' slavery. Brahma built the first human city, forged the sun and set it in the sky. After Santanis murdered him, Unastre restored Brahma to life, and he ascended to godhood. His golden citadel protects the souls of the faithful dead in the underworld.
Portfolio: Civilization, sun, smiths
Domains: Light, War
Symbol: Bull of the Sun

Unastre (N)
Unastre was a powerful demoness who repented her evil nature when she married Brahma. She helped cast down the Hellkings and restored Brahma to life after his murder by Santanis.
Portfolio: Sex, death, magic
Domain: Death, Knowledge
Symbol: Six-armed woman 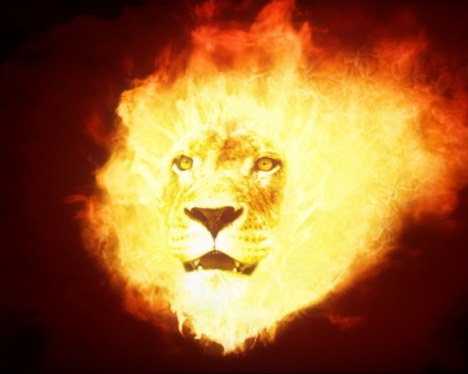 Zarthura (LN)
Depicted as both a warrior in golden armor and a mighty lion with a mane of fire. According to Madyan legend, Zarthura created the world when his fiery mane dried up the ocean and allowed land to rise from the water. He is a mighty slayer of demons and undead. According to the faithful, Zarthura is the one true god of Humanity.
Portfolio: Honor, kingship
Domain: Light, War
Symbol: Flaming lion

The “quiet maiden” bears the burdens of the world and brings mercy to the suffering. The Church of the Divine Couple states that she was a mortal worshiper of Unastre, but there is no historical proof of this.
Portfolio: Healing, suffering, mercy
Domain: Life
Symbol: Silver goblet

A warrior queen and protector of the valiant with flaming red hair and silver armor. The Church of the Divine Couple states that she was a mortal worshipper of Brahma, but there is no historical proof of this.
Portfolio: Valor, sacrifice, heroism
Domain: Life, War
Symbol: Upraised sword

The strongest man in the world. An immortal hero and monster hunter of whose exploits form the basis for a hundred folk tales. Followers of Hrothgar are dedicated to protecting the weak from the forces of evil.
Portfolio: Strength, excellence, monster hunting
Domain: War, Tempest
Symbol: Boar's head.

The Thousand Gods of Vancia (Any Alignment)

There are more gods in Vancia than can be easily listed, and full-blown clerics are rare. Some of the more popular gods are Guillorum, god of commerce (N, Knowledge); Bolobok, god of drunkards (CN, Trickery); Mother Rat, goddess of the poor (N, Life); and Old Man Iron Hands, god of war (NE, War).
Portfolio: Thousands. A god for every little thing.
Domain: Any
Symbol: So, so many...

Thantogrim is the dour god of death, war, and gateways. He guards the realms of the dead, allowing none to enter or leave. When his vaults are full, he will lead his armies to conquer a new reality.
Portfolio: Death, war, gateways
Domain: Death, War
Symbol: Black gates

The Unforgiving King is the god of tyrants and the rule of law. His followers know that the weak are destined to be dominated by the strong.
Portfolio: Law, tyranny
Domain: War
Symbol: Spiked Gauntlet

A mysterious figure of insanity, cosmic ennui, and entropy. His cults have begun to grow in power and influence, infiltrating the hearts of civilization.
Portfolio: insanity, time, entropy
Domain: Knowledge, Trickery
Symbol: The Yellow Sign

The barbarian tribes of Grendil honor hundreds of animal totems. The following are but a small sampling.

Khoza
Domain: Death
Symbol: Skeleton
“Everything dies. Everything but me.”

Domain: Knowledge
Symbol: Quill pen
“Wisdom is the pen the rewrites the universe.”

Domain: Life
Symbol: Open hand
“To heal another is to heal yourself.”

Domain: Nature
Symbol: Tree with a man’s face
“It is given to us to be stewards of this world.”

Domain: Trickery
Symbol: Racoon
“Who me?”

The Temple of Irrelevance [Mini-Map Monday]

"Hey, you're back. How was the Temple of Irrelevance?"
"I don't really want to talk about it."
"What happened? Were there a lot of monsters?"
"No. Not really. Just one orc with a pointy stick. He took a couple pokes at us then wandered back to his room. I don't think his heart was in it."
"Oh. Well, were there any traps?"
"Kind of. No. I mean the door to the treasure room had an old joy buzzer tied to the handle, but that's all. I don't think the thing even worked any more."
"Ah! But there was treasure, right?"
"Just, like, socks. Seven mismatched socks. Not even +1 socks, just old wool crew socks."
"Oh."
"Yeah, man. I don't think we're going back." 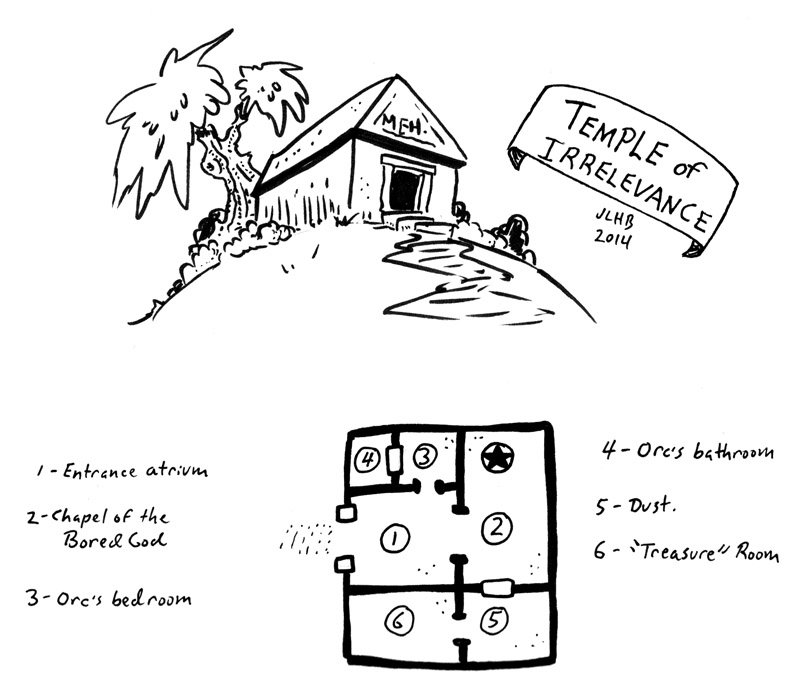 While Christmas shopping yesterday, I bought a handful of those blind-packed Lego mini-fig packs for myself (because I love them, and I have been very good this year). After assembling my four random figures, I set them on my desk and thought "Wow, I'd really like to see an adventuring party made out of these guys."
So...

Bolivia Cardova
High Concept: Monster hunter
Trouble: I've seen some things, man...
Other Aspects: Zen archer; Master alchemist; Zombies. Why is it always zombies?
Approaches
+3 Careful
+2 Sneaky
+2 Clever
+1 Quick
+1 Forceful
+0 Flashy
Stunts
Because the patient arrow always finds its target, I get +2 when I Carefully Create Advantages related to aiming and tracking targets.
Because I am a master alchemist, I get +2 when I Cleverly Create Advantages through the creative use of potions, elixirs, and injections.
Because I have fought my share of monsters, I get +2 when I Quickly Defend against physical attacks from inhuman creatures.


Iggy Galactic
High Concept: Avatar of the Cosmic Starchild
Trouble: Doesn't experience time linearly
Other Aspects: Maximum charisma; Electro-Quantum Guitar; I talk to planets, Baby!
Approaches
+3 Flashy
+2 Quick
+2 Clever
+1 Forceful
+1 Sneaky
+0 Careful
Stunts
Because I dance across the song of the spheres, once per session I can appear in any scene, as long as music is playing nearby.
I because I have maximum charisma, I get +2 when I Flashily Create Advantages related to charm and persuasion.
Because I can know the Totally Awesome Power Chords of Power, I get +2 when I Flashily Attack with the power of Rock!


Skippy Goldfarb
High Concept: Reality hacker
Trouble: Nebbish
Other Aspects: Fifth-dimensional control pad, Everybody's buddy, Approximate knowledge of many subjects
Approaches
+3 Clever
+2 Sneaky
+2 Careful
+1 Flashy
+1 Quick
+0 Forceful
Stunts
Because I see things you don't, I get +2 when I Carefully Overcome Obstacles related to perception and searching.
Because I can access the source code of the universe, once per session I can rewrite the laws of reality for a scene.
Because I play with a fifth-dimensional control pad, I get +2 when I Cleverly Create Advantages when I reassemble the physical world.


Wizzlepoof
High Concept: THE WIZARD!!!
Trouble: Grumpy old man
Other Aspects: I live on the moon, Almost entirely improbable life story, Stars and smoke!
Approaches
+3 Forceful
+2 Flashy
+2 Clever
+1 Quick
+1 Careful
+0 Sneaky
Stunts
Because I channel dangerous energies, I get +2 when I Forcefully Attack opponents with thunder and lightning.
Because I am sorcerer from space, I get +2 when I Flashily Create Advantages related to stars and smoke.
Because I possess the Azure Gem of Insight, once per session I can ask the GM a yes-or-no question about the game universe, which they will answer truthfully.
Posted by Josh Burnett at 8:40 AM 5 comments: