Pangloss Campaign Update ["So Many Archmages!"]

Back in October, half my game group went off to work at the local haunted house. After that was over, my job slid right into peak season. As such, our D&D 5th Edition game has been on hold for a few months. Thankfully, we're jumping back into it this weekend.

It's been a few months, though, so I put together a dossier for my players, reminding them of what they've recently done, where they've been, and where they're currently at.

It occurred to me that this dossier might serve as a fun kinda'-sorta' actual play/campaign report, so Imma gonna share it with y'all.

The Wotan Clan came to the seaside town of Vandala and met with the archmage Eon the Unfathomable, Interlocutor of Balance with the Pentarchy. Eon commissioned the heroes to travel to the Well of Discord and retrieve the Eye of Aboath. The Eye is an artifact of alien evil which Eon desires for secure study. He warned the heroes “Gaze not into the depths of the Eye.” For this service, he promised the Wotan Clan 3000 gp, an introduction to the Seclusium, plus a variety of items from his collection of enchanted objects.  The heroes, of course, accepted.

Before leaving Vandala, however, the Wotan Clan defeated a group of Mind Flayers responsible for kidnapping children and sending them through a gate to the alien city of Illithos. The heroes were rewarded by Lady Delphinia
Starflower with a banquet in their honor. Toward the end of the festivities, a group of emissaries from Archavoi arrived. These minions of the Ashen Queen were known as the Brotherhood of Cinders. They have some business with the Lady of Vandala and have set up a large camp outside of the town walls. Their unknown purposes are suspected to be sinister and caused great distress to the local representatives of the Bastion. But that was a problem for another day, as far as the Wotan Clan was concerned.

The Clan made preparations before they left for the Well of Discord. First they researched the dungeon at the Library of Kelious Beagle. The heroes uncovered many useful facts about the Well of Discord. When Beagle found out where the party was headed, the grump scholar contracted them to find a book supposedly hidden within the dungeon—A Treatise of Plants of a Peculiar Aspect. The party also hired the unpleasant ranger, Mugrum Stump, to act as their guide through the Thistlethorn Forest.

Finally, the Wotan Clan left Vandala and headed north into the hilly wilderness and the Thistlethorn Forest. It wasn’t long before the heroes encountered Yarko the Great, archmage and Prefect of Good in the Pentarchy, who flew down on his giant white owl. Over coffee, Yarko asked the heroes to bring him the Eye of Aboath, which he intends to destroy for the safety of Pangloss, and indeed, all of Wyrld. For this service Yarko promised to pay the Clan 3000 gp, introduce them to the Seclusium, and present the heroes with a variety of magical items.  The heroes’ answer was noncommittal.
One night, while Balthazar was on watch while the rest of the Clan slept, the warlock was approached by emissaries of his Fiendish patron. This messenger manifested as a girl-voice goat accompanied by a robed figure holding a lantern. Balthazar was charged with retrieving the golden skull of Hekufarhim the Crepuscular.

Continuing on, the heroes later come upon a 100-foot-tall stone pillar, on top of which sits a weathered old man in a loin cloth. Thistle uses her Spider Cloak to climb up and talk to him. The man was a monk, who had been meditating for a year and had achieved “Total Cosmic Awareness” and offered to answer one question for them before he went back into meditation. The Clan asked for the whereabouts of Apostate, the Mind Flayer behind the kidnapping ploy in Vandala who escaped their justice. The heroes were surprised to hear that Apostate was currently on Klaive, the third planet from the sun (Wyrld is second).


Eventually, the Wotan Clan entered Thistlethorn Forest, where they encountered a giant snail carrying a small keep on the back of its shell. This was the mobile manse of Maveth Blackbraid, dwarfish archmage and Magnathaum of Evil in the Pentarchy. Surprising no one, she too wanted the heroes to retrieve the Eye of Aboath.  For this service, she would pay the Clan 5000 gp, introduce them to the Seclusium, and give them a variety of magic items from her collection. She openly admitted that she intended to use the Eye to increase her own personal power and rule Pangloss. She also admitted to sending other parties ahead of the Wotan Clan. The heroes were impressed and thanked her for her honesty.

A few days later the Wotan Clan arrived at the Trollmaw Mountains, deep within the Thistlethorn Forest. They encountered a patrol of gnolls and tracked them back to their village. Unprepared at the moment to take on 100-plus gnolls, the PCs vowed to return later and moved on to the Well of Discord.

The Well of Discord was built into the side of a mountain, its massive, fallen doors flanked by two towers. An open an inhabited dungeon, the sounds and smells of danger echoed from its depths. The Wotan Clan left Mugrum with Balthazar’s footman to guard the wagon, and the Wotan Clan entered the Well of Discord.


Known facts about the Well of Discord

Built 900 years ago by the human wizard Gorlach the Foul Hand.

Open and closed many times over the centuries.

The dungeon has been expanded, reoccupied, and modified by various inhabitants.

Reopened most recently 5 years ago by an adventuring party called the Brass Helm.

Gorlach was an art lover and included many galleries in his sanctum.

Alien cultists made the dungeon their home many decades ago.

Magic is unreliable the deeper you go into the dungeon.

A small village of woodsmen lies just a day southwest of the dungeon.

Warlord Gilliard Greywulf entombed his 333 elite guards within the crypts 400 years ago.

150 years ago, Idoryl the Gold (cleric of Brahma) descended into the dungeon to cleanse it of evil.

There is at least one portal to another world somewhere in the dungeon.

600 years ago, refugees from Sahu, the Isle of the Necromancer Kings, made the dungeon their home.

The dungeon once held a great library.


Things that happened in the dungeon…

The Well of Discord was a powerful Wild Magic Zone. Spells and cantrips have become distressingly unpredictable.

Something weird happened, where new party members appeared without warning. The party had years of memories regarding these new individuals.  Then they disappeared, along with any memories regarding them. Anything they did with the party, however, inexplicably remained (healing, monsters killed, the alien coin that Jimmy Starsoul gave Balthazar, etc.).
“New” party members included:
o   Mohaan Lionstalker of the Tallgrass tribe
o   Jimmy Starsoul, the space wizard
o   Slipperfoot, the giant weasel that talks like a man (R.I.P.)
o   Smokestack Joe McGillicutty, the hobomancer
o   Princess Marigold
o   Quvak, the humanoid platypus

The Black Tongue gnoll tribe took up residence in the first level of the dungeon, performing violent rites to Demogorgon.

The Wotan Clan rescued Tom Barley, Halfling cleric of The Lawgiver, from fiery sacrifice. Tom came to the dungeon with his adventuring party, Fortune’s Fellows. They wanted to find the Oracle that resides within the Well of Discord and find out what’s causing mass spontaneous miscarriages in their town. He joined the Wotan Clan in order to find his missing companions.

In the towers the Clan found a magical “hard light” seal bearing the symbol of Brahma, holding a door closed. The heroes used magic to suppress the seal and enter. Beyond the seal, they found an ancient torture chamber that was home to a powerful Kyton and her minions.

On the second level, the Wotan Clan found distressing statues of the archfey known as the Gustatory Colossus and the Despicable Infant. They also encountered mimics, an alien fruit bush, and the corpse of a Yellow Warlock of K’Narth.

A magical art gallery caused numerous problems for the Clan. A chimera leaped out from a magic eye painting, while a painting of gnolls playing three-dragon ante transformed Skeld into one of those foul creatures.

The Wotan Clan discovered an underground garden guarded by gargoyles. The garden held a variety of magical plants that grew under the light a piece of star.

At last, the Wotan Clan settled down to camp in a safe room, specially warded against a variety of monsters. They currently share the space with a trio of disgusting Sludge Dwarves who warned the part to stay off Level Five… unless they want to kill the dragon. 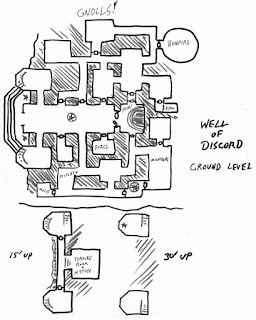 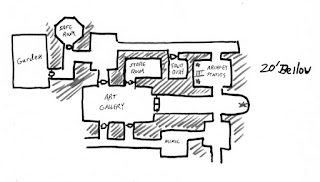