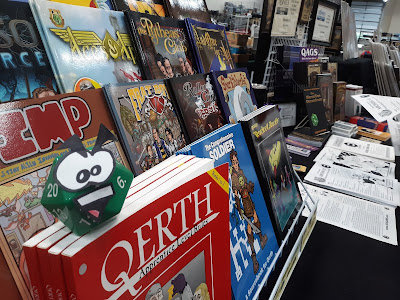 Archon is an old-school sci-fi and fantasy convention in Collinsville, IL (just across the river from St Louis) with a pretty decent gaming component. What do I mean by “old-school” convention? Well, they still call it an SF/F convention, they talk about “masquerade” instead of “cosplay,” they still have “filking” and they refer to the dealers’ area as the “hucksters’ room.” Old school, yo. The con attracts about 2,000 people and plays hosts to a lot of room parties. Much of Saturday night just becomes a big nerdy bacchanal. I’ve had a lot of fun there.

Hex Games (makers of QAGS and Hobomancer!) is surprisingly popular there, and we usually sell
decently. Archon’s a bit of a trek for me from Toledo, so I haven’t gone back in about 6 years. But after the fun time I had at Gencon this summer, the Hex boys convinced me to return to Archon. It was, after all, Hex Games’s 20th anniversary, and we had some celebrating to do!

On Thursday, I made my way down to Cincinnati to meet up with Leighton “Laser Beams” Connor, and we headed out to St Louis bright and early Friday morning. The trip was largely without incident and we made it to the Gateway Convention Center in Collinsville with some time to spare before our 2pm games. We used that time to go to the Hex Games booth and touch base with Steve “Dollar Sign” Johnson, Carter ”Greyhound” Newton, Ian “Erudite” Engle, and Jeffrey “Beloved Family Man” Johnson. We admired our new 20th anniversary banner and were especially pleased with our new release, the print version of the complete American Artifacts collection (coming soon to DrivethruRPG!). 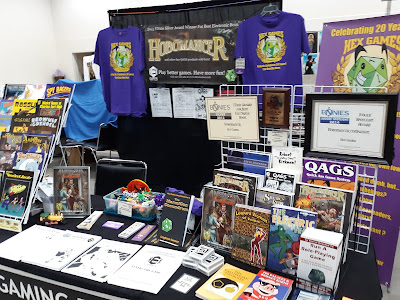 
I ran this game at Gencon, so I was pretty well prepared. The plot revolves around the mysterious disappearance of the entire high school, an idea a stole from an old Firesign Theater album. The game went smoothly, and the Cinemechanix system works very well. It was easy to plug in sub-systems for magic and relationships. I have vague plans to adapt the setting into its own game using my own story-gamey system. So, y’know, watch this space.

Later that night, in the dealer’s room, I ran into Jarrett Crader, whose name was somewhere on almost everything I bought at Gencon this year. We talked briefly about the upcoming Mothership horror-sci-fi RPG (looks exciting) and the importance of editing and public gaming in regards to promotion. I wish I had a chance to speak with him more, but we both had things to do. He gave me some sweet Mothership swag, though. Thanks Jarrett!

We had two panels to run Friday night. The first, “Flash Bang Forever!” was about magic in RPGs, and frankly went kind of clumsily. The second panel, “How to Run a One-Shot” went a lot smoother. It focused on running one-shot games at conventions and public venues and I think we had a lot of good advice to share. At some point I’ll put together an article on the subject. I’ve run a lot of one-shots over the years.

Friday morning we carbo-loaded at the Drury Inn’s breakfast bar and made our way back across the street to the convention center. I had two games on Saturday, with only a half-an-hour between them.


The set-up was pretty simple. Take cargo from point A to point B with weird stuff happening in between. I had a fun random-cargo table, and I had a bunch of Matchbox cars for the players to use to represent their vehicles. It was Smokey and the Bandit meets Road Warrior.  I made good of the copy of Country Crawl Classics I got from Jarett at Gencon, for times when I had to decide “what happens next?” It was bloody and violent and weird.

My afternoon game was Hobomancers in Space: 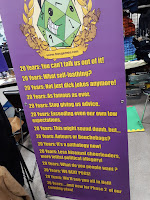 I also ran this game at Gencon, so I was good and ready to run it. It’s a sequel to last year’s “Hobomancers in Space” which was a sequel to the previous year’s “Hobomancer’s in Hell.” I’m not sure what the next step will be. This adventure was fun because I got to tap into all my knowledge of weird UFO lore—shapeshifting reptilians, blue doctors, planet Nibiru, all of that. It also lets me play one of my favorite NPCs, Thermal Vent Terwilliger, the alien hobomancer.

Saturday night we had our “20 Years of Hex Games” panel-slash-birthday party. We didn’t have a huge turn-out, since we were scheduled opposite the masquerade contest and drinking. Still it was a fun panel that went over the various ups and downs of Hex Games over the past two decades.

As I had said before, Archon is a party con. Much of Saturday night is given over to room parties, drinking, and nerdly frolicking. Not too many years ago, my friends and I were all eager participants in these celebrations. We stayed out until 4am, stopping only because the booze ran out, crawling into bed only to wake up a few hours later to run 8am games, hungover or still drunk from the night before.

Yeah, we don’t do that anymore. This year we just went to Carter’s room with a bottle of Jefferson’s bourbon. We poured liberally from the bottle, reminisced about days gone by, and made wildly inappropriate jokes with Hex Games corporate mascot Happy D20. We were all in bed by midnight.

Sundays at Archon are pretty hit-or-miss. Leighton’s game didn’t go off (no players) and Steve only had a short 2-hour game that attracted a handful of players. We made a few last-minute sales in the dealers’ room, and then it was time to break everything down.  We had our traditional Archon dinner at the thoroughly-average Mexican restaurant next to the convention center, and it was time to part ways.

I used to go to Collinsville twice a year—once for Archon, and once for Diecon. This was my first time back in 6 years, and I was happy to make the trip. The people at Archon are always welcoming, and it’s good to decompress with a smaller con after focusing on Gencon so much. More importantly it was good to see my friends again. I hope to come back next year.