The Nameless World is unfathomably old. Thousands of empires have risen, fallen, and been ground to dust by eons of time and conquest. Most of the mainstream religious cults don’t even bother with creation myths. The very idea of a time before the world strikes most philosophers and scholars as patently ludicrous.

These self-same academics believe that the Nameless World lies at the center of all things—not just the material universe, but of all planes of existence. How else can one explain a world both besieged by demons from below and confounded by angels from on high? The numerous and vermiform alien beings that bubble up from the shadows and unseen corners of space lend credence to this theory as well.

Most people will tell you that the Nameless World has four moons. Those people are wrong. The world has no satellites, and what most people call moons are, in fact, planets. The Nameless Worlds and its four sister planets orbit in such close proximity to each other that from the surface of each, the other planets seem as large as the moon does on our own world. These orbits are erratic and unpredictable, and only the most dedicated and mathematically-savvy of astrologers can predict their movements and appearance with any degree of accuracy. Certainly, the cosmological influence of so many planetary bodies in such close proximity has some influence of inherently magical nature of the Nameless World. The four “moons” are Nibiru (home world of the Elves), Erebos (the undead moon), Halakim (where angles live), and Lykos (the wolf moon).

The world teeters on the edge of a unique form of environmental devastation. As any wizard will tell you, magic originates as phlogistonic energy channeled from the Thaumic Plane and shaped into spells through the synaptic patterns burned into the brains of trained sorcerers. Even the smallest of spells dumps large amounts of phlogiston into the environment. Trace amounts of this alien energy linger long after the spell is cast. Residual phlogiston is rarely detectable or harmful to living things, but over centuries, thaumic residue begins to pool together, forming sumps and sinkholes of dangerous magical energy. These phlogistonic cysts cause environmental corruption, spawn alien monstrosities, and weaken the barriers between worlds. Ecologically minded wizards blame the increase in monsters and dimensional incursions over the past several decades to this thaumic pollution. Very few sorcerers are willing to make the personal sacrifices required to reduce this global corruption.

Sometimes these pools of magical fallout coalesce and mineralize into weird purple-green ore, somewhere between crystal and metal.  It has a slightly waxy texture and glows dimly like a blacklight. Sorcerers call this mineral thaumalite, although wizards on some worlds know it as compound-N, nibirulith, or mutanto. Thaumalite can be used to empower spells, at the cost of greatly increasing the chance of fallout and corruption. 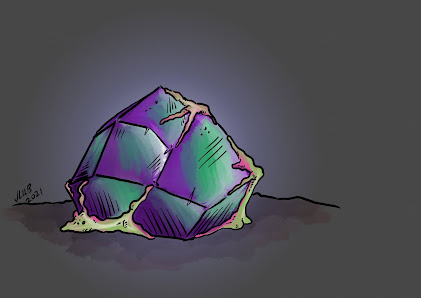 System: A fist-sized chunk of thaumalite grants a wizard or elf +1d10 to their spellcasting roll. After used this way, the bonus die drops one size as the chunk’s mass boils away.

There are several dangers associated with thaumalite. Merely carrying the mineral on one’s person gives them a -5 to all saves against mutation, corruption, or transformation.

Additionally, when using thaumalite to boost a spellcasting roll, the chance of magical mishap is greatly increased. If a spellcaster uses thaumalite to boost their roll, a failure is treated as a 1, with all associated dangers. If the bonus die comes up as a 1 but the spell roll still succeeds, then the spell is cast and is not lost, but the caster suffers the “or worse” consequences in the “1” section of the spell (misfire, corruption, or patron taint).

Posted by Josh Burnett at 4:59 PM No comments:

The titan Prometheus is the divine personification of Foresight. This gave him the knowledge to side with Zeus and the gods when they rose up against his fellow titans. Prometheus can grant his disciples an approximation of his foresight.

The mechanics of this spell were influenced by the Luck Word in Kevin Crawfords excellent Godbound rpg. I believe diviners in D&D 5th Ed do something similar as well.

Development on Gorgon Crawl Classics (my Mythic Greece/Peplum setting for DCC) continues to putter along. I'll admit I've gotten distracted by a couple other projects, to say nothing about day-job stuff.
I plan on including three new patrons in GCC--Orpheus, Echidna, and Prometheus.
In GCC, Prometheus is something of a messianic figure. He's the creator and patron of humanity, suffering now for his crime of stealing fire for humanity. Theoretically, the PCs will eventually get a chance to help Hercules free him from his bonds.
As a patron, Prometheus' gifts are based around fire, foresight, trickery, and creation. He only grants patronage to those who fight for the common good of mankind.
Below is the Promethean Invoke Patron table I've been using in my playtests. I'm sure it will continue to be tweaked. Enjoy!
(Also, Brendan Lasalle is including Prometheus as a patron in X-Crawl. I haven't seen it yet, but I'm eager to see how similar/different it is from mine.) 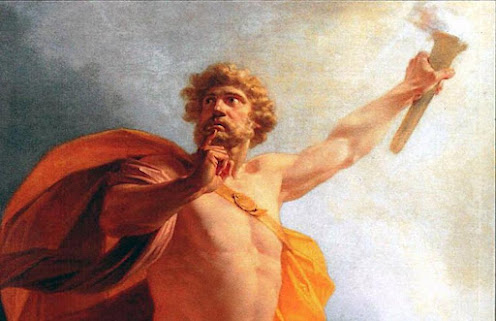 The Nymph has been the hardest class for me to put together for Gorgon Crawl Classics. It started off as a simple reskin of the Elf, a kinda-fighty spellcaster. I quickly realized that the Cleric spell list fit the “semi-divine nature spirit” concept better than the Wizard spells did, so it changed into an Elf with Cleric spells. But the Cleric spells, on average, lack the “oomph” of Wizard spells. So without access to Turn Unholy, Lay on Hands, and Divine Intervention, the Nymph was just kind of a less-goods Cleric (albeit, with slightly better saves).

I know “balance” isn’t really a thing in Dungeon Crawl Classics, but I needed reasons to play a nymph (other than simple cool factor), especially since level-0 isn’t a thing in GCC, and players can choose their class. What I came up with was giving her access to a handful of wizard spells, as well as some benefits when she’s in her native environments. I’m pretty happy with how the Nymph sits right now, but there are sure to be a few more tweaks. At some point I need to write a nymph-specific Disapproval table.

Also, in my research I found out that there are Nymphs native to the Underworld—Lampads, Persephone’s torchbearers. So yeah, goth nymphs—pretty cool. 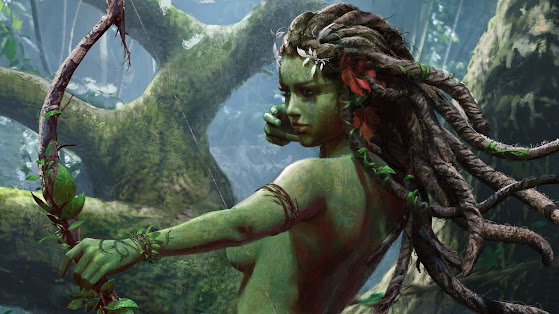 Ageless: Do not age and are immune to all supernatural aging.

Bonded to Nature: Choose the environment to which your Nymph is bonded. This choice determines what kind of Nymph you are and will effect some of your special abilities. This choice cannot be changed, baring exceptional circumstances.

Grace: If unarmored and not using a shield, the Nymph can add her PER modifier to her AC.


Divine Nature: Thanks to their connection to nature and the gods, Nymphs are natural spellcasters. Nymph cast clerical spells, rolling 1d20+PER+LUCK+Level as their casting roll. Armor check penalties apply.

Due to their connection to the powers of the divine, Nymphs get to choose which spells they learn at each level, and do not have to depend on the whims of fate or the roll of the dice. All Nymphs start with the exclusive spell Nymphcraft (see below) and may choose a number of additional spells as indicated on their class table. This amount is further modified by their PER bonus.

Nymphs have access to all the spells from the Cleric's list. Additionally, Nymphs have access to several traditional wizard spells which they can select as known spells. Nymphs will tell you that wizards stole these spells from their ancient sisters. Nymphs cast these as Cleric spells. Failed rolls do not result in loss, failure, corruption, or any of these wizardly hazards, but accrue Disapproval as normal.