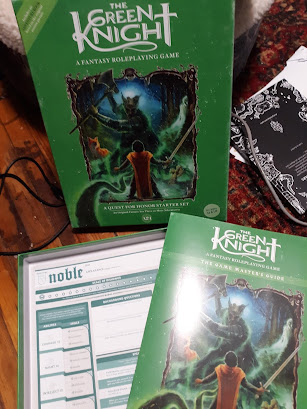 The Green Knight: a Fantasy Roleplaying Game is not at all what I expected. I'm not entirely sure it's what I wanted either. It's a tie-in for the upcoming-but-delayed movie from A24 (a movie I'm really looking forward to), and is billed as a "Starter Set."

The production values are good, and the box is nice, if a bit emptier than expected. Just a short quick-start booklet, a handful of character sheets, and a pretty cool black-and-green D20.

The game is certainly not a D&D clone like I half-suspected. It more closely resembles a suped-up version of Lasers & Feelings and other minimalist narrative-style games. It would fit right in with a lot of the RPGs on itch.io. Keep in mind that I actually like minimalist narrative-focused story games.

Your main stat is "Dishonor." It goes up and down steadily over the course of play. When you attempt a dishonorable action, you want to roll under Dishonor to succeed. When you attempt an honorable action, you want to roll over. Specialization in skills and attributes modify the roll up or down. Each class has a handful of special abilities on top of this. It's all very simple.

There are no Hit Points or anything, and combat is very abstract and narrative. If you hit 20 Dishonor, you're character's story is done. You can "atone" to reduce your Dishonor score, but it's pretty costly for your fellow players.

The included adventure is pretty linear and kinda'-sorta' railroady. But I can let that slide for a quick-start intro game. It focuses solely on the PCs traveling to the Green Chapel to meet the Green knight, with a handful of encounters to delay them. It would probably work pretty well for a short convention game.

I don't hate this game, I'm just kind of "meh?" about it. 10 years ago I'd have been all over this game. Right now, it's just not really my flavor. As this is a "starter set," I'm very curious what a full version will be like, especially for Arthurian adventures that don't revolve around the Green Knight.

As it stands, I think I'll stick to Romance of the Perilous Land or Wolves of God for my Arthurian fixes.

Posted by Josh Burnett at 11:30 AM No comments: