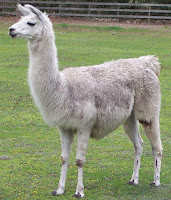 
Spit (Recharge 5-6). The llama chooses a target within 10 feet of it. That target must make a DC 12 Dexterity Save or be blinded for 1d4 rounds.
Posted by Josh Burnett at 1:46 PM