So back in second-or-third grade, years before I started gaming, the cool thing to do in my class was to make maps. My friends and I spent so many hours drawing maps on regular notebook paper (when Morris brought graph paper to school one day IT BLEW OUR MINDS), then trading them with each other. Each of us tried to make the most confusing and difficult map we could. I never suspected that my preadolescent map fascination would lead to a hobby as a semi-pro dungeoneer. Who knew?

So... Labyrinth of the Minotaur King. This is the home of Crook-Horn, the mighty, black-furred king of the minotaurs who wields the flaming green greataxe, Hell-Harrower. The Labyrinth lies beneath the Obsidian Mesa, east of the Madlands, and was supposedly crafted by a race of hideous dwarf/minotaur hybrids ("mini-taurs"). Crook-Horn supposedly died centuries ago. I'm sure it's perfectly safe now.

Middens of the Morlocks [Mini-Map Monday] 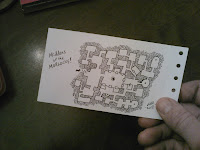 Today's map really is mini. As you can see in the photo, this map was drawn on the back of a little card I got from work. This is how I spend my lunch breaks.

A tribe of cannibal morlocks have made their home in the sludge-filled ruins of an ancient sewer. Recently a pod of magical mushroom men have also wandered into the dungeon, taking several rooms as their own middens. The two factions now clash over the limited space and resources. Can a band of adventurers recover the treasures from the ruined overcity without falling prey to either faction?

Posted by Josh Burnett at 11:04 PM No comments:

Do Not Piss Off My Players [Stars Without Number]

So, my Stars Without Number players set off a nuke.

My players got their hands on a nuclear device and used it to destroy their enemies and a large chunk of the surrounding city and residents.

It's easily the most destructive event to ever happen to me in 25 years of gaming.

It wasn't a quick thing, either. They spent several sessions plotting and planning this thing, then took sneaky action to execute it. I'm not going to even try to fully relate several sessions of action and intent, but I want to go over the highlights. It's neat how a bunch of different elements from the entire campaign fell together.

Our heroes' started their careers by doing the occasional freelance mission for Oroborus Industries, the most powerful megacorp in Persephone Sector. After a few adventures, the players figured out that Oroborus Inc isn't just vaguely sinister, but actively evil. This didn't really bother them that much, truth be told.

Eventually the PCs struck out on their own, discovered a pre-tech garden and got their hands on a space ship.

While exploring the pre-Scream ruins on Las Diablas, they discovered the coordinates to Darsalam, a system the PCs had never heard of. Excited, our heroes restocked their new ship (rechristened Wild Hunt) and headed out to Darsalam, full of exploratory spirit.

Imagine their surprise when the PCs discover that Oroborus is already in the Darsalam system. Not only that, but the evil megcorp has interdicted the entire system! Patrol ships keep out any interlopers, like Wild Hunt.

As soon as Wild Hunt enters the Darsalam system, the Oroborus ship Invisible Hand accosts them and orders their surrender.

This doesn't go over well. Wild Hunt is boarded. The PCs repel the boarding crew and kill the enemy captain. Invisible Hand blasts them good. The PCs realize that they are heavily out-gunned but manage to spike out of system before they are destroyed.

The PCs are pissed.  Not only in this interdiction illegal, but the PCs are mortally offended that Oroborus had the audacity to try and keep them out!

Thus begins the long plan. The PCs have an enemy now, and they want to hit them hard.

The PCs nurse their wounds on Cedar, the the native, forest-covered planet of the Naga. Oroborus has a small presence here. Hana and Pete use their criminal contacts to try and find other people with a grudge against Oroborus.

The PCs hook up with a small terrorist faction known as The Native Clutch. This radical Naga group wants to remove all human presence from Cedar. Their current target is Robofactorum-14, an Oroborus commercial robot factory on a small island. They give the PCs a small quantum detonator. This device itself isn't actually a bomb, but if the PC attach it to the side of a reactor, it will cause the reactor to overload and explode once they hit the timer. It's a dumb man's bomb.

The PCs blast their way into Robofactorium-14, with Hana gleefully using her new rocket launcher. They decide that they don't really need to use the quantum detonator to explode the factory's reactor. Instead, they use Donna's technical skills to cause a meltdown, and the factory goes up in a massive explosion. During the raid, they were also able to make off with over a dozen commercial robot chassis (mostly nemesis and echo frames).

The PCs leave Cedar, letting The Native Clutch take the blame for the attack. They now have a quantum detonator. They can attach it to any reactor (in a factory, city, starship, whatever) and make it explode. Or, if they get their hands on some fissionable materials, they figure can make a nuclear bomb.

Now they have a plan. They want to blow up Oroborus's corporate headquarters on Croesus.

They need to get their hands on some fissionable materials. The PCs set up a meeting with a representative from Titanomachy Technologies, the largest military tech corporation in the sector and Oroborus's most bitter rival. In a secret meeting on Las Diablas, the PCs broker the deal. In exchange for the pre-tech lab they discovered (complete with the highly valuable fruit garden), the PCs get 3 million credits in Titan Tech "gift certificates" and a small quantity of cobalt-X (a powerful explosive).

As I expected, the vast majority of the Titanomachy credits go to re-outfitting their ship--better weapons, more armor, repair materials. Since cobalt-X is a controlled, tracked material, Titan Tech just can't give them the explosive. However, the Titan rep slips them the coordinates to a small, automated research station, out in the wilds of Netherpool. "The robots and equipment there might have some cobalt-X there. It'd be a damn shame if a bunch of miscreants stumbled in and took off with it."

This is, of course, just what the PCs do, although they do have to fight a giant cryo-wyrm that (unknown to all) had made the research station its new nest.

The PCs have cobalt-X. The PCs have a quantum detonator. Any tech worth her salt can make a nuke out of this.

Donna uses one of the stolen echo frames to build Bob, a robot that looks exactly like human and will pass all but the most evasive medical tests. She puts the bomb inside his stomach and links them into with Hana's new ghost-talker cybernetics systems. They now have a robot suicide bomber (Bob Ba-Bomb).

Once a year, all the major stockholders, CEOs, and other corporate captains hold a shareholders' meeting/Roman bacchanal. The worst kind of excesses--the kind of stuff Enron only wishes they could have done. The PCs have been doing all this in the three months leading up to the party, and that party is almost here.

The meeting/retreat/bacchanal is going to be held on Oroborus's private pleasure airship. All the guests will board the ship at Oroborus tower. The president of Oroborus, Draconis Suresh, is even supposed to be in attendance.

This is the PCs' target.

Using the vintage Hawaiian shirts they originally found on their ship, they disguise Bob as an eccentric billionaire. Donna programs him with a loud and boisterous personality. Pete and the Wild Hunt are wanted in the Croesus system, so he and Donna hid the Wild Hunt in an asteroid field while Hana loads Bob into their shuttle. Hana uses some fancy flying to slip onto the planet undetected. She uses a good chunk of their dwindling cash to rent Bob a top-end grav-limo and send him off to Oroborus tower. Hana heads back into orbit.

Bob gets to the tower, but he has no invitation, and security is tight. However, Donna programmed him well, and he is able to bluster his way inside. Bob comes to another security check-point, right outside the boarding area. This check-point includes powerful medical scanners that will detect his robot nature.

The PCs trigger the bomb.

The Croesus system is now in lockdown by the planetary government, but the Wild Hunt sneaks out of system before patrol ships can stop them.

In the following weeks, Croesus falls into civil war. The legit planetary government looks weak, and the megacorps take this opportunity to stage coups to grab total control of the system. Titan Tech already had warships in the system (since they were aware of the PCs' plans). Oroborus is hurt bad and has to pull its fleet from Darsalam in order to keep the Titan ships in check and prevent its utter destruction. The entire planet is a war-zone as megacorp fights megacorp with the planetary governemnt stuck in the middle. The death toll continues to grow.

But at least now our heroes can use this distraction to slip into the Darsalam system.

And do not ever tell them that they aren't allowed to go somewhere.

The Goblin Grotto includes a bridge over an subterranean river, where the local goblins (and the occasional dungeon robber) like to fish.

Way in the Deep Down Bellow, one may stumble across the Five Pits of Mordiggan. This collection of vile cauldrons of evil are dedicated to the hidden god of the dead. The Pit of Bile, the Pit of Bone, the Pit of Blood, the Pit of Shadow, and the Pit of Fire.

Posted by Josh Burnett at 4:49 PM No comments:

That's right it's another mini-mega-dungeon. These things are really fun to make and strangely relaxing. This sprawling complex of caverns and chamber includes three entrances, several bridges over underground rivers, and a lake with ancient docks.

Drawn all free-hand with illustration pens on board.

Some day I'll get up the gumption to key these things...

Posted by Josh Burnett at 3:47 PM No comments: