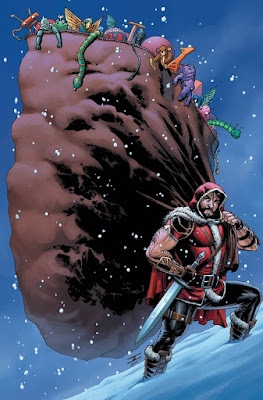 You are a Knight of the North, a defender of children and protector of the innocent. You bring joy and warmth to the world during the darkest nights of the winter.


Possessions
Advanced Skills
Special
Children’s toys do not encumber you at all, no matter how many you carry. You cannot reliably retrieve them during combat.
Posted by Josh Burnett at 3:14 PM No comments:

Email ThisBlogThis!Share to TwitterShare to FacebookShare to Pinterest
Labels: troika 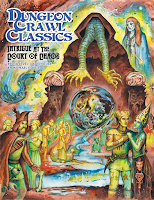 We ran our final session of Ashes of Angels a couple of months ago. While not the longest campaign I’ve run, 12-plus sessions is a pretty healthy run for me these days. The campaign started as a Lamentations of the Flame Princess game and transitioned to Dungeon Crawl Classics near the end. The conversion was pretty easy and injected enough interest back into the campaign to keep it running for a few more months.

Everyone enjoyed the campaign, but what ultimately ended it was my desire to move onto new games, settings, and genres. Specifically, after a couple years of bleak horror games, I’ve grown weary of nihilistic “the world sucks and you suck too” campaigns. My players, I could tell, were starting to grow bored with the constant character attrition. They want a chance to grow attached to the PCs for a while. I grok that.

Our last session revolved around resolving “Intrigue at the Court of Chaos.”  I’m not going to go over the whole thing because that module is mostly just a series of riddles and puzzles. It’s very good and very weird, but to recap all the events would be boring and spoilerish to the module.


Afterwards, we as a group decided to step away from the campaign and try some new things. We played three sessions of Mothership that went very, very well. Many of my players had never tried a percentile-bases system before and they loved how easy it was to pick up. Mothership’s a helluva game.

Ultimately, though, we decided as a group that our next game should be something totally different in tone and setting. So instead of semi-historical horror-fantasy we’re shifting to optimistic space opera—Star Wars! I’m pretty excited about it, and my players are all stoked about their competent and (semi)heroic new characters.
Posted by Josh Burnett at 5:44 PM No comments: 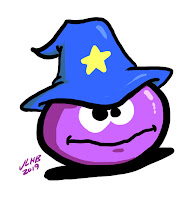 Slimes are cute but semi-dangerous monsters that resemble brightly colored dollops of gelatin with googly eyes, about the size of a footstool. Most slimes spend their lives randomly attacking neophyte adventurers only to be slaughtered by the same. But ever since you slurped up that dead wizard, you’ve become a bit smarter than your slimy brethren. You know there’s more out there that wandering the forest, waiting to be beaten to death by some kid with a wooden sword. You’ve made your way to Troika, ready to find your fortune under the Humpbacked Sky.

Special
Your gel-like body prevents you from wearing armor, but you can still use weapons as normal or slam enemies with extruded pseudopods. You can’t wear a backpack, but you can safely stow gear inside your body, retrieving it like any solid character would from their own pack. Your malleable form allows you to squeeze through any gap or space of an inch or more. Your gear doesn’t squish with you, so you may need to drop some items to fit through some spaces.
Posted by Josh Burnett at 12:36 PM 4 comments: