Crepuscular #1: Sanctum of the Snail--NOW ON SALE!

The first issue of my new adventure-zine for Dungeon Crawl Classics is finally here!

Creupuscular is a zine dedicated to Dungeon Crawl Classics and includes new adventures, patrons, spells, magic items, and other gamable content. Issue #1 is a 48-page comic-sized book, written and illustrated by me, Josh Burnett. The inaugural issue features a new 0-level funnel adventure, Sanctum of the Snail.

It was a fairly pleasant trip until the storm hit. Your ship sank, and now you and the other survivors--peasants, pilgrims, and gongfarmers--are stuck on this jagged spire in the middle of the ocean. The storm rages all around you while monsters crawl out of the sea. It looks like the only way off this rock is down through that weird door. Who will live and who will die in this 0-level funnel adventure? 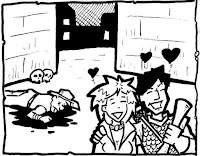 I've very excited to release this zine, and I hope you all enjoy it, too.

Crepuscular #1 is available in PDF from DriveThruRPG
You can get the print version HERE. My initial print run was pretty small (I already put in a second), so act fast!

You can also see a quick video preview of the book below.