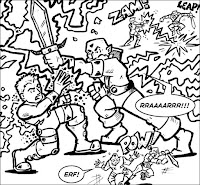 My good friend Leighton Connor draws a lot of comics. His current comic is The Electric Team. He co-writes this post-apocalypse sci-fi/fantasy all-ages adventure comic with his school-age daughter Abby, and it is drawn by Samantha Albert. If you like Adventure Time or Steven Universe, you'll no doubt enjoy The Electric Team, and you should check it out.

The Electric Team recently wrapped up its third chapter, and Leighton wanted to give Samantha a break while also branching off and exploring some solo stories about the individual characters. Leighton asked if I was interested in illustrating a solo story he wrote about the lightning-powered science hero Mr. Amazing. Well, of course I said yes! 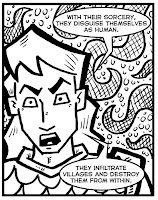 As of this writing, we're in the middle of Swords & Serpents, wherein Mr. Amazing meets the barbarian warrior Druuj the Slayer and confronts evil Snake Men. You should go read it now. Tell your friends! Tell everybody!

This isn't the first time I've worked with Leighton. I produced the Thoroughly Thurl spin-off story for his Laser Brigade space opera comic. I also wrote and drew part of the Hate Frog vs. Drip-Drop Man fight from his wonderfully funny and surreal Fuzzball & Scuzzball comic (my favorite of his comic projects). And, of course, together we co-wrote the beloved RPG sourcebook Leopard Women of Venus.


Posted by Josh Burnett at 6:24 AM No comments:

Email ThisBlogThis!Share to TwitterShare to FacebookShare to Pinterest
Labels: comics, stuff i did, stuff my friends did
Newer Posts Older Posts Home
Subscribe to: Posts (Atom)