This supposedly bottomless chasm is known only as the Depthless Maw to the residents of the Deep Down Below. Strange arachnid monsters, supposedly ruled by the alluringly alien Scorpion Maiden have recently taken control of the surrounding caverns and chambers. Like the bottom of the Maw, their motives remain unfathomable. 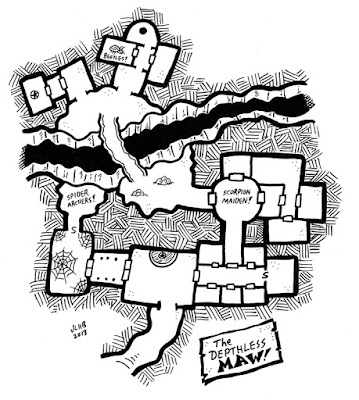 Drawn will Faber-Castell illustration pens on scrap board my father-and-law sent me. (He sent lots!)

Posted by Josh Burnett at 7:24 PM No comments: 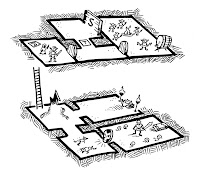 I missed it last year, but this year I wanted to make sure I entered the One Page Dungeon Contest.

The Burial Mound of Gilliard Wolfclan is a short adventure for a handful of newbie characters that I've run in a couple different systems. I had fun redrawing the maps in that crazy isometric style. More importantly, the adventure includes an introduction by my favorite NPC, Old Tooley!

You can see some of the maps right on this here blog post, I've shared the entire dungeon over on Google Drive.

(EDIT: And already I find some typos that needed fixed. Well, they are fixed now!)

Email ThisBlogThis!Share to TwitterShare to FacebookShare to Pinterest
Labels: maps, one page dungeon

I've been sick most of the day, so I didn't get today's map out as quickly as I'd like. It's still Monday in parts of the country, though, so I'm going to count this as a win.

Deeper into the Deep Down Below lies a strange spiral labyrinth rumored to be the sacred home of the mysterious flail snails. A mighty guardian slug stalks the passageways to the shrines of invertebrate gods. The musty Snail Pit is said to lead to some weird molluscoid hell. 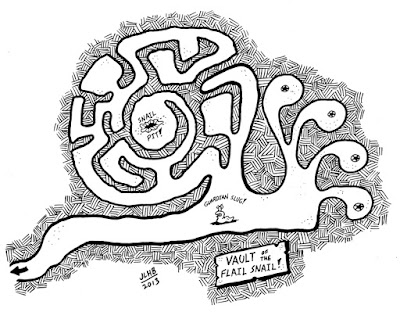 If I get around to writing a FLAILSNAILS complaint adventure for this map, I can be totally recursive!

Posted by Josh Burnett at 9:33 PM No comments:

Just outside the city gates lies a small, secluded farmstead. A trap-door in the cellar leads to the hidden Sanctum of the Secret Guild. The guild members may be thieves, assassins, necromancers, or other unsavory folk. Training rooms, living quarters, secret niches, and hidden treasure rooms abound!

Drawn freehand with cheap illustration pens on even cheaper board! 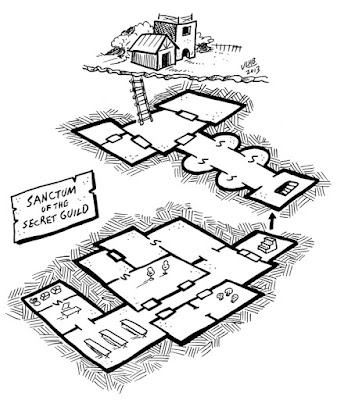 Leopard Women of Venus, in Color!

So a while back, my friend Leighton Connor and I wrote and illustrated a book for QAGS called Leopard Women of Venus, a gonzo-sci-fi setting based on the works of Fletcher Hanks. Leighton recruited  Lindsay Hornsby to help out with art, and I think her style really meshed well with ours.

We've wanted to do a print version of the book for a while, and it finally looks like that's coming together. One of the things we wanted to do was print the thing in color, which meant we needed color versions of all the black-and-white (and red) interior artwork. That job is finally done! Hopefully we'll have a dead tree editions of this thing available soon!

Check out some of the color art below! 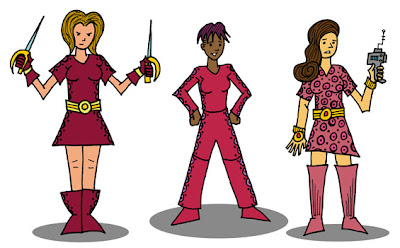 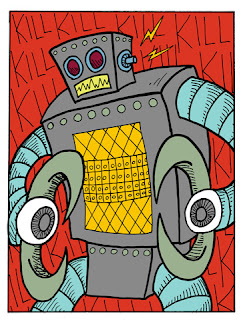 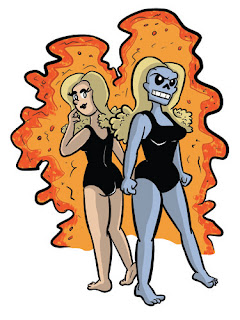 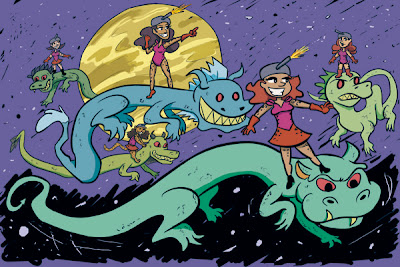 Posted by Josh Burnett at 7:02 PM No comments:

Email ThisBlogThis!Share to TwitterShare to FacebookShare to Pinterest
Labels: art, leopard women of venus, stuff i did, stuff my friends did

Into the Lava Caves [Mini-Map Monday!]

This here's a quick map I drew while roleplaying online this weekend. It's not my best work, but there are a lot of rooms, some caverns, a staircase upwards in the central chamber, and a huge lava lake of course. 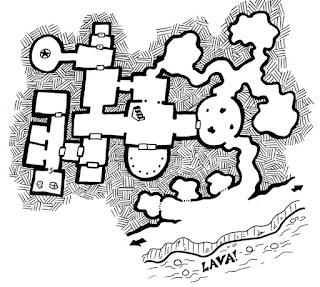 Posted by Josh Burnett at 7:20 PM No comments:

I've got some longer posts I want to write up--more gamey goodness--but I don't have time to do that right now.  (I really oughtta' go to bed. Third shift is murder.)

I've been looking through my illustration files (making a futile attempt at organization), and found a bunch of stuff that still amuses me. Figured I'd share 'em here!

This idea's been kicking around in my head for some time now, and April Fool's Day seems like as good a time as any to finally put out out there.

Grooch
Grooches are foul, furred humanoids taller than a dwarf but shorter than a human. They live unpleasant, solitary lives, and have personalities that make even the grumpiest of dwarves say “damn, that guy’s grumpy.” Grooches have bulgy eyes and are covered head-to-foot in dirty, oily fur that ranges in color from green, to brown to orange. They have no homelands of their own, but often form small, insular communities in the trash pits and cesspools of human cities or in unpleasant swamps far away from others.

While not necessarily evil, grooches are uniformly unpleasant--short-tempered, foul-mouthed, grumpy, and temperamental. Most grooches are of Neutral alignment, preferring to just be left alone. The cruelest of grooches cast their lot with Chaos. Even the rare Lawful grooches are insufferable pricks.

Special Abilities
Immune to poison and disease: Due to a lifetime spent in trash and filth, a grooch is totally immune to all mundane and magical poisons and disease. They can also eat spoiled dungeon rations without ill effect, in fact they prefer it.

Scavenge:  Given time and a large enough trash yard, a grooch can find or piece together just about anything he needs. It takes 5 minutes per gold piece of value to find a specific item (for instance it would take 150 minutes, or 2 ½ hours, to piece together a functional suit of 30gp studded leather armor). In a city trash yard, he can find any item off the basic weapon, armor, or adventuring gear lists  up to a value of 100gp. In a village or hamlet, this limit is reduced 50gp.

Foul Taste: At 4th level, a Grooch’s body fur is so foul and nasty that it becomes mildly poisonous. Any creature that successfully hits the grooch with a bite attack must save vs. posion or suffer a -2 to hit for 1d6 rounds due to nausea.

Speak With Vermin: Upon reaching 9th level (Grooch-Lord) a grooch learns to speak with vermin at will. This ability functions like the cleric spell Speak With Animals but only works on normal or giant-versions of worms, bugs, rats, and other foul creepy crawlies. Keep in mind, that most such creatures don't usually have much to say.

Reaching 9th Level: At 9th level, a grooch has an option of building a stronghold, usually deep in a forlorn swamp, ruined city, or other unpleasant place. Secret grooch building techniques allow these strongholds to be camouflaged in such a way that they appear smaller on the outside than they are inside (but this is just an optical illusion). Such a stronghold will reluctantly attract other grooches, while most other creatures will leave the area in disgust. A grooch will only attract other grooches as hirelings and henchmen, and he probably won’t get along with those well, either.