We wrapped up our Silent Legions game not too long ago. It ended with world-hopping and body horror and sacrifice and explosions. At least the world was saved. My group needed to decide our next game, so we held a committee meeting to vote on what to play next. We decided upon the new Warhammer 40k RPG Wrath& Glory. (The other options were Vampire 5, Lamentaions of the Flame Princess, and Crawling Under a Broken Moon. Tough choices!)

My home group has a mixed level of familiarity with Warhammer. Three of my players are Warhammer veterans. My wife and kid are mostly unfamiliar, other than what she’s picked up from me. As for me, I’ve been gaming for 30-plus years, so I’ve picked up a lot by cultural osmosis. But aside from a couple of video games and a Death Watch one-shot using Fate Accelerated, I actually haven’t had a lot of table-time with the 40K universe. Thankfully, there’s like a ton of info out there on the Internet, so I’ve tried to be diligent with my research.

We started with a Session Zero to create characters and discuss setting elements. The next week we had a short session to give those new characters a whirl. Wrath & Glory uses a point-based character creation system. Many of my players aren’t used to point-buy, and I haven’t done much myself since running Champions in high school. So, character creation took a few hours, but with a group that size that included several 40k newbies, I don’t think that’s too bad.

The basic set up of our campaign is this:

The PCs are Tier 3 characters, all working for a rogue trader named Gabriel Galahad. Depending on who you ask, Galahad is either a swashbuckling  hero of the Imperium who’s personally responsible for claiing a dozen systems in the name of the Emperor, or he’s the ponciest ponce who ever ponced. Neither opinions are incorrect. He’s kind of as if Zapp Brannigan or Zaphod Beeblebrox was good at his job.

His ship, the Golden Humongous is an ancient Star Galleon, 10,000 years old. The players are his personal troubleshooters. “There’s trouble on that planet that I don’t feel like dealing with personally. I need you to go down there and shoot it.”

Tone-wise, I’m trying not to make this a comedy name, but there’s only so much I can go against my nature. We’re going to lean into the skulls & violence vibe of the setting, but it’s going to be more like Heavy Metal and GWAR. The universe is certainly terrible for the characters (although the PCs are mostly above the daily grime), but we the players don’t take it too seriously.


I don't have any warhammer minis, but that just gave me an excuse to put together some lego version of our merry warband. I didn't have a lot of time, and I had limited pieces, but I think they turned out pretty okay.

I was actually very surprised that no one chose to play a space marine or sister of battle. I consider those to be super-iconic 40k archetypes. Meh, what do I know?

The warband’s first mission was to travel to the hive world Sombra and pick up the Humongous’ new engiseer, a tech priest named Thermius Stembolt-57. Stembolt is an old friend of Lord Captain Galahad’s. Of course, the tech priest didn’t show up at the spaceport like he was supposed to, so the warband has to descend into the and find the guy.

So far they’ve run into a less-than-helpful arbiter and wandered into a sleazy bar that hosts squig fights. Our first actual play session was shorter than I’d like, and we’ve barely gotten a taste of the combat system. The next session, however, promises to be exciting and violent.
Posted by Josh Burnett at 5:57 PM No comments:

Leighton and Alice Connor are friends of mine. Leighton is another member of Hex Games, and my co-author on Leopard Women of Venus. Alice runs the Edge House, a progressive Christian campus ministry at the University of Cincinnati. I love the Edge House. It has a great welcoming vibe and is a comfortable atmosphere for creative works. I’ve drawn a number of comics in the House’s upstairs. There was an RPG group that met regularly at the Edge House, but they’ve recently lost a number of players, and the group’s kind of fallen apart. The RPG group wanted to attract new players, the Edge House wanted to attract new students, and Leighton and I wanted to run some Dungeon Crawl Classics, so everything conspired in our favor. Even though Cincinnati is over 3 hours away from Toledo, I was excited to drive down to run some DCC for a new audience. 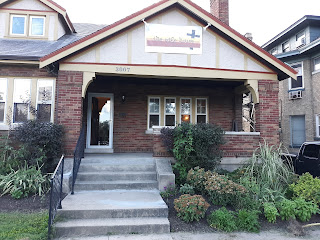 Alice spent the preceding week promoting the game day by both fliers and word of mouth. By the time Saturday, September 15 rolled around, we had 11 people signed up, enough that Leighton and I could spilt them into two groups and run two different tables. We decided to Run “Sanctum of the Snail” from Crepuscular #1 because we were both familiar with the adventure (Leighton was my editor), and we wanted to able to compare notes with each other afterwards to see how each group handled things differently. 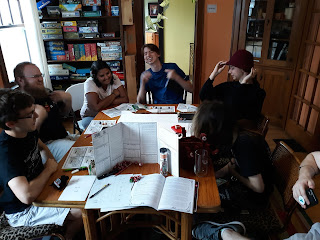 Our players were all young college students, men and women, and they were delightful. None of them conformed to the typical negative gamer-caricatures. Those post-millennials were super-cool to the two jaded old Gen-Xers running their games. Great people. All of them were avid D&D players (mostly 5th edition), but none of them were familiar with DCC. We were excited to introduce them to the “more awesome” hack of D&D.

Our sessions ran a little over 4 hours, with a break in the middle for pizza and Indian food. Of the 18 zeds at my table, only 4 managed to survive until the end. Leighton’s table were luckier, and managed to escape with something like 9 or 10 zeds intact. Both groups managed to avoid running into the Chthonic Snail (unfortunately). Both were disgusted by the giant tapeworms, and both groups found the secret armory. Also, both groups totally avoided the sepulcher and missed the magical axe therein. (No group I’ve ever run has bothered exploring the sepulcher.)

All the players had a very fun time, and there was a lot of cheers and laughs from both tables. I hope we converted at least a few of them to DCC. I passed out the DCC bookmarks I had, as well as copies of the Free RPG Day Third Party companion. I had an extra copy of the DCC Quick Start Rules, so I awarded that to the player at my table who still had one of her characters left and had the highest remaining Luck score (16!).

Leighton and I considered the game day a great success. We exposed several new players to Dungeon Crawl Classics, we helped a bunch of gamers find each other, and hopefully the Edge House will be able to get a regular game group together again. 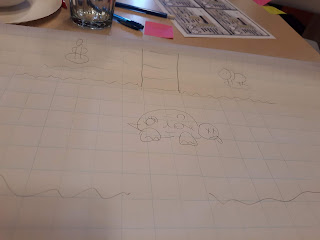 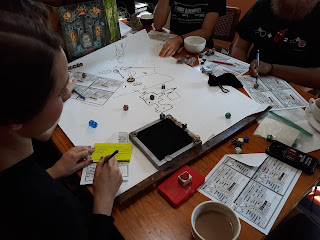 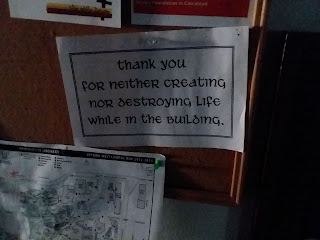