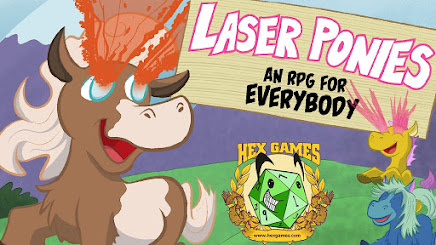 My friend and Leopard Women of Venus co-creator Leighton "Laser Brigade" Connor is currently kickstarting the 2nd Edition of his "RPG for Everybody" Laser Poines!

Laser Ponies was originally published in 2009 as a supplement for QAGS. This new edition still uses the QAGS mechanics, but is a complete game in one book. QAGS is a quick and simple system that should appeal to fans of Macchiato Monsters, the Black Hack and other rules-collaborative games.

Leighton has put his heart and soul into this game, and you should go support it RIGHT NOW!

As of this writing, the Kickstarter has 10 days left to go, and has already hit it's funding. But here's the thing. If the KS hits $1500, then I get to write an adventure for it! My Laser Ponies adventure deals with the PC ponies going up against a greedy bear who uses a magical artifact to control bees and terrorize his neighbors and hoard all the honey for himself. Don't you want to see what that's about?

Posted by Josh Burnett at 12:28 PM No comments: