If the blog has been quiet lately, it’s because we’ve been very busy down here in the Flumphwerks. And what we’ve been busy with is Leopard Women of Venus!

THE KICKSTARTER IS LIVE!

I’ve talked about Leopard Women of Venus (LWoV) before, but I’m going to go into a bit more detail here. LWoV is a psychotronic sci-fi setting based on the works of cult-favorite Golden Age cartoonist Fletcher Hanks. I’ve called Fletcher Hanks the “Ed Wood of old comics,” because his imagination outpaced his talents. His artwork is weird, often grotesque, and his stories are simple, lurid, and violent. But there’s a weird, fever-dream imagination behind them that really speaks to some core part of me and Leighton’s (my co-writer) creative muses.

Leighton Introduced me to Fletcher Hanks around 2010, when he showed me a few pages out of I Shall Destroy All the Civilized Planets, the first volume of Hanks’s collected works. I was intrigued, and over the next year or so we put together a setting book for QAGS called “Leopard Women of Venus” all inspired by this initial panel: 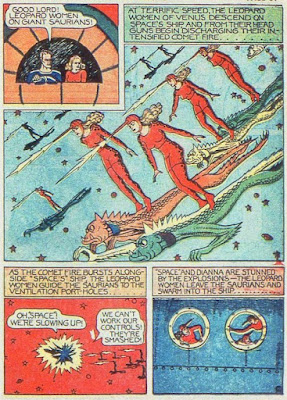 Years went by, and now Leighton and I decided to update and rewrite LWoV for Dungeon Crawl Classics. The weird pulpy insanity of Hank’s sci-fi, superhero, and adventure stories lend them selves well to the amped-to-eleven nature of DCC.

How Do You Make a Game Based on Fletcher Hanks?

That’s a good question. If you’re familiar with Hanks’s work, you know that he’s not big on world building, or character development or even plot. Most Hanks stories are only 6 to 8 pages long. A villain executes some crazy scheme, and out overly-powerful hero swoops in and brutally murders them in the name of justice. This brutal justice is often meted out in creatively disgusting fashions. In the hands of a more focused writer, the punishments would be ironic, but for Hanks they’re just weird. Occasionally there’s a small setback for the hero that he has to overcome to complete that W-shaped plot, but for the most part the stories are simple and direct.

Since there’s not a lot to base a game world on, Leighton and I used Hanks’s work as a springboard for our own imagination. We put all of Hanks’s best known characters (Stardust, Fantomah, Space Smith) as well as his most used tropes (giant insects, fear of spies, bug-eyed monsters, toxic jungles, bodily mutation or mutilation), put them in a big ol’ blender, then mooshed that psychotronic slurry into a cohesive sci-fi setting.

Fantomah and Stardust are omni-powerful, nearly godlike beings, so they work perfectly as Patrons. The jungles of Venus are ruled by giant spiders. Uncanny chemical deposits spawn strange mutations in humans, animals, and plants. Monsters crave human flesh. And the struggling human settlements must always be on the lookout for enemy agents.

On top of that we layered our own creations. The human settlements of Palna, Avrok, Otram, and the Caverns are all terrible places to live, each with cultural baggage amped up to toxic levels. The Humanoid Coalition is the one real force of good on Venus, dedicated to bringing something like balance between the human factions and getting them to work together against the apocalyptic threats to the planet.

If you’ve read anything else that I’ve written, you know what to expect from LWoV. It’s not a comedy setting, per se. But we take a ridiculous premise and deal with it straight. It’s weird, and a maybe a little disturbing in places, but not distressing. It’s quirky, and there are some jokes, but it’s not funny-ha-ha. It skews towards “gonzo” but there’s an internal logic to things (mostly). 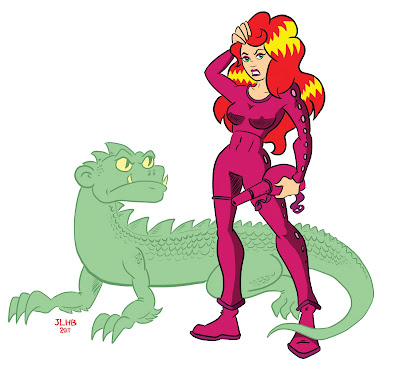 This is already getting too long, and I didn’t really want to turn it into a commercial. But I want to tell you about the artists and editors we have lined up. Aside from Leighton and I, we have a great group of illustrators lined up: Brad McDevitt, Juan Navarro, Evlyn Moreau, Diogo Nogueira, James V. West, Matt Kish, and the legendary Erol Otus! Additionally, we’ve got two great editors to catch all the typos and comma splices and make sure our sentences make sense: Steve “Dollar Sign” John$on and Fiona Geist.

You guys, I’m very excited about this book. We’ve added so much more to the original QAGS version while tightening up stuff that just doesn’t work any more. DCC is a great fit for LWoV, and I badly want to get it out to the world!

I’m sure I’ll talk about the project more here over the next few weeks. But come back next time for more Troika stuff!

Posted by Josh Burnett at 6:51 PM No comments: