This weekend I finally got to run the first session of my Fate Accelerated Star Trek game. I played with my Skype group from the MonkeysTook My Jetpack podcast using the rules I wrote up for FAE Star Trek. This isn’t a straight actual-play report, but I do want to talk about how well the game went. 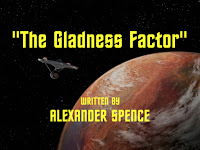 The campaign is set in the 23rd century, during the original series era. The U.S.S. Skipjack is manned by an unruly crew of misfits.  The ship is equipped with an experimental cloaking device, directly in conflict with the Treaty of Algeron, so the Federation needs to make sure its crewed with “deniable assets.”

For the first session (“The Gladness Factor”), I wanted to keep things simple. A small and isolated colony has cut off all communication after struggling for the past several months with near-famine conditions. When the Skipjack arrives, the away team discovers that the colony is doing quite well. Their crops and fields are fertile and all the colonists seem happy. Super happy. Disturbingly happy. Way too damn happy.

The away team eventually discovered that a psychic alien plant had taken over the colony. The Ego Plant insinuated itself into all the crops, boosting their production. In return, the Ego Plant feeds on the willpower of the colonists, forcing them into a nightmarish state of forced bliss. Happiness or death!

Thankfully, after a desperate fight that involved remodulating some phasers and the deaths of several red-shirts, the away team was able to defeat the Ego Plant and free the colonists.

I was very happy that my players fully embraced the tropes of the 1960s Star Trek series. Great big arm-swingy brawls. Tacked-on obvious love interests. Random deaths of red-shirted ensigns. They embraced all this without falling into the trap of parody. I look forward to the next session.

Stunts
Because I bear alien spores, once per session I can put the “weak willed” aspect onto anyone who eats contaminated veggies or is in my immediate proximity.

Because I am a psychic alien plant, I get +2 to sneakily make mental attacks.

Because of my weird alien material, I get +2 to forcefully defend against phasers.

Stress: OOOO
Posted by Josh Burnett at 2:19 PM No comments: