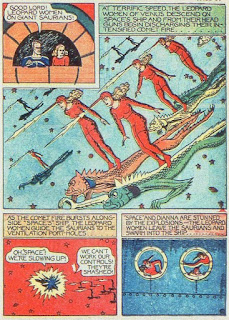 In 2011, Leighton Connor and I wrote Leopard Women of Venus for QAGS, the Quick Ass Game System. LWoV was a weird, psychotronic sci-fi setting based on the works of obscure Golden Age cartoonist Fletcher Hanks. Leighton and I were very proud of LWoV, and the book sold as well as any QAGS book.

Fast forward to last year, Leighton and I are driving home from Archon in St. Louis, discussing Dungeon Crawl Classics and Leopard Women. We suddenly come to the realization that the crazy-weird world of Leopard Women of Venus would be a perfect setting for DCC!

Leopard Woman of Venus is a feverish sci-fi setting for Dungeon Crawl Classics set on the savage and surreal planet Venus. The titular Leopard Women are genetically-modified super-soldiers in service to the sinister Science Robots, fighting to maintain order on the nightmarish jungle world.

Things the book will include: 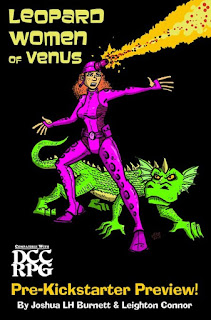 We hope to launch the Kickstarter shortly after Gencon. Right now we’re reaching out to artists and editors. We want to put a lot of new art in this thing, and we want to pay them all fairly. I also want to make sure our editors get paid for their work.

For Gencon, we put together a little preview zine that we’ll be passing out. The 24 page booklet will have a sneak-peek at the Leopard Woman class, the occupation tables, some monsters, and a quick primer on the setting. We’ll have 100 copies to give away at Gencon, so track me or Leighton down! After Gencon, I’ll have a PDF of the zine up on Drivethru.

This is exciting, gang! Keep watching the blog here or follow me and Leighton on Twitter (@bernitheflumph and @johnnyampersand) for more news!