Out in the untamed lands rests Skull-Bone Barrow. Legend says that the barrow was crafted around the actual skull of a dead giant. Scholars say it's just an unusual affectation of primitive architects. Still others say it's just an odd coincidence that the huge burial chamber resembles a skull.

Private crypts form the "teeth" of the barrow. Huge pits of ever-burning charnel fire form the "eyes." The "nose" is a black pit that leads to unknown Stygian darkness. 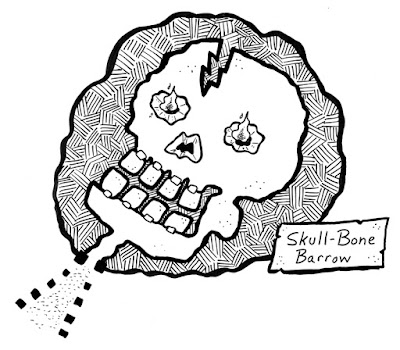