Non-Human PCs in Far Away Land

As I’ve said before, I really like Far Away Land. The system is simple but the setting is weird and awesome and surprisingly complex. Hopefully I’ll get to play or run it soon (maybe after my Fate superheroes games is wrapped). The Far Away Land G+ community is so active, I’ve barely been able to keep up with all the posts.

In Far Away Land, the basic assumption is that the PCs are all humans. Humanity is a new and alien species in Far Away Land, with only one large city. As strangers in a strange (far away) land, this gives the (presumably human) players an immersive perspective as they explore and uncover the mysteries and strangeness of the world.

But humans are boring, right? Who wants to play a jive old human when you can play a gourd-headed Poomkin or a bear-riding Agnun? The general vibe I’ve picked up from the FAL community is “You want to play a non-human? Sure, go ahead, have fun!” That’s cool.

I’m not a big proponent of “game balance”  but I often feel like you have to tweak rules for non-humans a little to make humans at least somewhat desirable. Here, then, is my hack for how I’d allow non-humans in a Far Away Land game that I may or may not eventually run.

The basic jist of it is that special abilities replace starting boons. Joe Vanilla human gets four boons; Gump the Poomkin only gets two boons, but can regenerate ands see in the dark.

I’m not a numbers guy, but I mostly assumed that most abilities are worth one boon. Some (like better senses) are worth half a boon, while others (the Blonin’s Teleportation) are worth more.

Some of the races below also include an extra flaw, either as a further pseudo-balancing measure, or to maintain the “flavor” of the race. This flaw is required in addition to the 1d3 flaws all starting PCs take.

Here are the races from the Creature Index in the Tome of Awsome that I would allow as PCs. Use them as you will.

But seriously though, why would you play anything but an Orka? Those guys are badass. I mean Gruun, man... 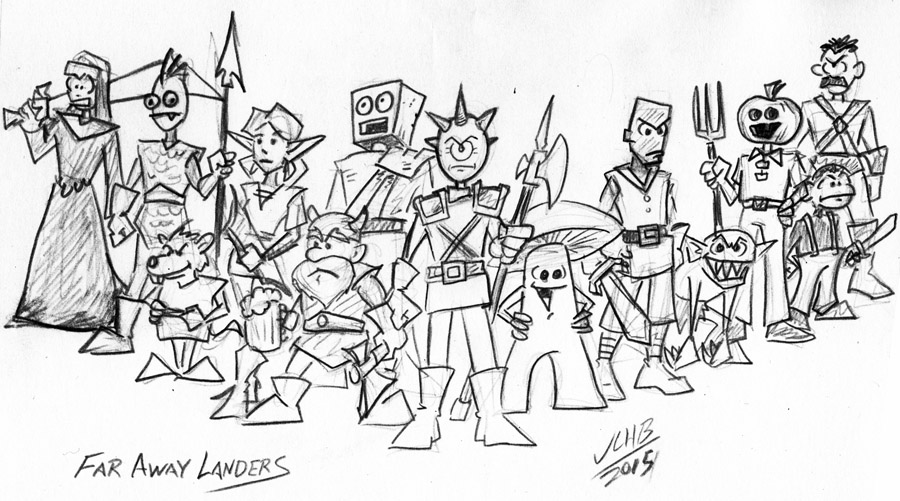 Agnun
Boons:2
Abilities: Animal Bond (Grizzle Bears), Night Sight, Telepathy (with other Agnuns)
*Note: While an Agnun PC can communicate with Grizzle Bears, she does not start play bonded to one. She will have to find and befriend the beast, who will probably want some service first before agreeing to act as her mount. Sounds like an adventure to me!

Zoordrooz
Boons: 4
Abilities: none
Extra Flaw: Surly
Posted by Josh Burnett at 9:24 AM