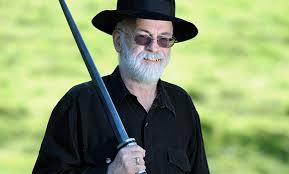 Terry Pratchett was a man of wit and compassion, of anger and insight, of reason and whimsy. He was my hero. No other writer, save maybe Douglas Adams, had such an influence on my writing and narrative and dialog style. Every bickering goblin mob, every brash and bumbling cop, every sass-mouthed cosmic entity is a thank-you note to Terry Pratchett.

His sadly-not-unexpected death has broken my heart.

Did you know that after he was knighted, Sir Terry Pratchett forged his own sword out of meteoric iron? Did you know he hid it afterwards? I can only hope it's in a trap-filled dungeon under his home.

This is my best way to honor his memory.

This legendary weapon was brought to this plane from some distant and unknown world. Pratchett's Blade was the favored weapon of a much-loved adventuring bard from Times of Old, known for his biting wit and unwavering sense of justice. The blade has passed in and out of many hands ever since, always bringing a spark of light to a darker world.

Pratchett's blade is a simple, but well-made shortsword forged of star-metal that glows with a dim octarine light in the dark. The hilt is wrapped in worn black leather, similar to bookbinding.

When attuned, the shortsword grants its wielder a +3 bonus to attack and damage. The sword also grants its wielder immunity to fear. On his or her turn, the wielder can cast Vicious Mockery as a bonus action (save DC: 13). Lastly, once per day (recharging at dawn) the wielder can cast Tasha's Hideous Laughter as a bonus action with a save DC of 15. 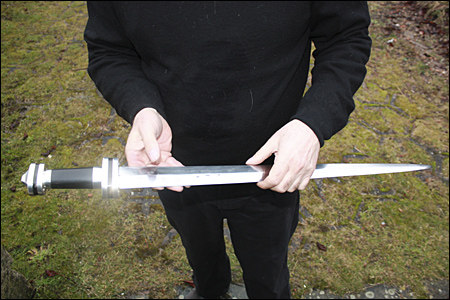