This blog usually focuses on roleplaying games, but comics are my first love, and I just got back from watching Batman v Superman: Dawn of Justice.

Plenty of people have already done full reviews of the movie, so I'm just going to make some comments on things that stuck out.

Long story short... After a bunch of scathing reviews I expected this movie to be an absolute trainwreck. Instead it was just meeeeeeeh... I left the theater with no sense of joy or excitement, just a dissatisfied numbness.

Despite the script he was given, Ben Affleck was really good as Batman/Bruce Wayne... despite all the murder. One could actually make a really compelling movie following Batman's slow decent into cruelty and fanaticism after a global disaster, and Bat-Ben would be perfect for it. This movie didn't go that way, of course. That would be too much character building.

Actually, I'd be happy to see Affleck in a straight-up adaptation of The Dark Knight Returns or All Star Batman and Robin (aka The Goddam Batman). I'm not a big fan of Frank Miller's version of Batman, but Affleck pulls it off.

Hey, did you know Jimmy Olsen was in this movie? Yeah, check the credits. He was the photographer executed by terrorists in the first 10 minutes of the film. Yeah, Zak Snyder murdered Superman's Pal because fuck you.

Jessie Eisenberg made a terrible Lex Luthor, but he looked cool in that weird lab coat. He could have made a decent Leo Quintum.

Perry White angrily tells Clark "It's not 1938! any more!" The year Superman was created. Fuck you, Zak Snyder.

Clark comments that Batman has mostly been terrorizing poor and underprivileged neighborhoods in Gotham. Someone later calls Luthor's party the "Lat Them Eat Cake Crowd." The movie comes ever so close on topics of classism and privilege, but of course it goes nowhere.

I am going to assume that the weird cube that was used to create Cyborg is a Motherbox, in a clumsy attempt to tie the character to Darkseid and Apokalips.

I am also going to assume that Batman's weirdly prophetic dreams are the result of The Flash mucking around with time travel, somehow granting Bats glimpses of alternate timelines.

I'm still not entirely sure how Luthor learned Superman's secret identity. It also seems that, after his arrest, he'd share that info with the first reporter, cop, or lawyer he talked to.

So, Superman can tell when Lois is in danger on the other side of the world, or knows when she's falling off a building somewhere, or has fallen into a well, but for some reason he can't keep tabs on his own mother? I guess she's bad at multitasking.

It seems like Superman should have started his conversation with Batman by mentioning his mother. "Hey Batman, while I'm still way up in the sky here, I wanna tell you that Lex Luthor kidnapped my mom and wants me to kill you. Maybe we're both being played."

I actually didn't hate the "My mother's name is Martha, too!" thing where Supes and Bats bond and become pals. It was perhaps the only Silver Age thing in the movie.

He Superman, instead of using that kryptonite spear yourself, why not toss it to the bad-ass super-powered warrior woman in the Greek armor with the sword and shield. I bet she knows how to use a javelin.

I was unabashedly excited to see Wonder Woman use her magic lasso on Doomsday, even so briefly.

Someone please tell Warner Brothers and DC that "The Death of Superman" is not this beloved classic storyline, and Doomsday is a terrible and boring character. You know what would have made for a better final fight with some more narrative weight? Have the good guys fight Luthor in his purple and green battle armor.  Since they clearly want to connect Luthor to Darkseid somehow, they could have even made the suit based on Apokalips technology, channeled into Luthor's brain like some mad fever dream.

So yeah... Go read All Star Superman instead. 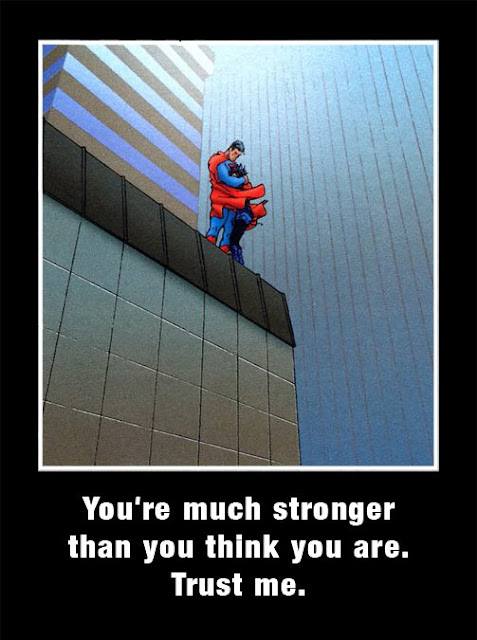 Email ThisBlogThis!Share to TwitterShare to FacebookShare to Pinterest
Labels: batman, I wanted to like this so much but no, superman