Into the Pagan's Well [LotFP: Ashes of Angels session 7]

I have been super busy with the (successful!) Draugr & Draculas Kickstarter and other projects. We’ve actually had two sessions of Ashes of Angels since my last actual play report. I’m going try and put them out pretty quickly, one after the other.

In this session, the party descended into the Pagan’s Well, which just so happens to be the mini-dungeon to be included in Draugr & Draculas. So, don’t tell me I never playtest anything. 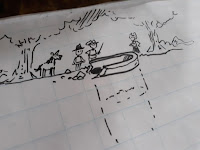 After tearing the grate out of the well in the previous session, the party erects their pavilion tent over the well to protect it from the weather and hide their activity from prying eyes. Ana stays topside while the party climbs down on secure ropes.

The bottom of the well has about a foot of water littered with thousands of copper coins. A statue of a raven, stag, and wolf rest against the walls. A bricked-up doorway stands between the stag and raven. Madeline leads the efforts to carefully remove the bricks and reveal the foggy passage beyond.

The hidden chambers beneath the well are cold and foggy, limiting vision to less than 20 feet, even with lanterns. Julius determines that the construction predates the Romans. The first tunnel ends in a T-intersection. The left-hand passage doesn’t go very far before it comes to a collapsed section. It will take several hours to safely clear away the rubble before they can pass. They decide to save that for later.

The right-hand path leads to an open chamber with a large trough of blood running to one of the walls, ten feet long by five feet wide. A carved image of one-eyed Balor (an evil god of old) leers above the blood trough. The blood seems distressingly fresh. Probing with the trusty 10-foot pole determines that the trough is about eight feet deep. There seems to be a 4’x4’ opening in the wall underneath the blood. No one seems eager to take a dip in the blood yet to check it out.

There’s another passage exiting out of this chamber, but the party decides to go topside and double check on things before continuing.

When they get back topside, Ana seems very nervous as she scans the treeline with her crossbow. “There’s someone out there…” she says.

Suddenly, there’s a “thump” on the top of the tent, and the canvas begins to burn. Someone’s thrown a flaming torch onto it! The party quickly exits as the expensive new tent goes up in flames. Immediately, they are assaulted by crossbow bolts coming from some unseen assailant in the trees. They immediately assume it is the weird, one-eyed, burn-scarred woodsman they met last session.

The party desperately scans the underbrush, trying to spot the sniper. Ana casts Summon and conjures a crystalline demon that she utterly fails to control. It turns to attack her and slices of her arm in one hit!

Madeline finally spots the shooter in the trees and calls out his position. Half the party opens fire on the shadowy form, while the rest try to get the demon away from Ana. Garrit hits the sniper with a solid arrow strike, and the assailant disappears back into the woods. The combined efforts of the party manage to take down the crystal demon while Belinda stabilizes Ana.

Garrit is not at all happy with the creepy trigger-happy woodsman, so he decides to burn down the forest. With the tactical application of a few burning oil flasks, the patch of light woods quickly goes up in flame. Alfred Pennyworth quotes are made.

The party returns to the village of Kotstadt and its stupid, stupid people. The Kotstadters wonder what started the forest fire.
“Do you guys know about that creepy guy that lives in the woods?” the party asks.
“You mean Madman Murphy?” the villagers reply. The party is not happy that no one warned them about this guy.
“Yeah, he did it. He worships Balor and set the forest on fire to appease his evil god. Also he cut off our friend’s arm.”
“That bastard!”
“Yeah,” says Garrit, “We should form a posse to go get him!”
None of the villagers are eager to do this, except fierce Father Hrothgar, the local priest.

Hrothgar grabs his old blunderbuss and he heads out with Garrit and Julius to find Madman Murphy, ideally in a part of the forest that isn’t on fire yet. A few hours and a couple of successful checks later, and the trio come upon Murphy’s shabby, secluded lean-to. Random fresh blood splatters indicate that the hermit is around.

Julius steps into a bear trap, shouting in pain and giving away their approach. Murphy fires upon them with his crossbow again. Father Hrothgar fires his blunderbuss, which misfires and explodes in his face, knocking him over, but doing no great damage. Garrit knocks out the supports to the lean-to, trapping Murphy under the old hides. Within moments, the trapped lump of Murphy is peppered with arrows. The evil hermit is dead. Looking trough Murphy’s belongings for treasure, they find a crude wooden idol of Balor, the rune-carved skull of Murphy’s father, and a bowl of hallucinogenic mushrooms, which they bring back for Belinda.

Everyone returns to the village for some much-deserved rest. Before going to bed, Julius, the former witch-hunter, goes to Ana to yell at her about summoning demons. Ana doesn’t feel like dealing with him and casts Charm Person upon him. Julius’s player makes the choice to play it as though he’s madly in love with the witch now. Fair enough. Ana tells him to leave and go to bed.
“Can I go to your bed?” he asks.
Ana considers for a moment. “Yeah alright,” she finally says, figuring that sex will certainly help seal the charm spell. She’s had a bad day, anyway, what with losing an arm and all.

The next day is New Year’s Day, and the party spends the day celebrating with the townsfolk. We roll on the carousing tables. Garrit makes friends with a travelling smuggler and later gets beat up after losing at cards. Madeline gets mugged. Belinda barely avoids marriage to one of the innkeeper’s horrible daughters. Mortimer and Julius manage to avoid complications.

The next morning, the PCs head back to the well, leaving Ana behind to rest and heal. The forest is now a smoldering wreck, but the well seems intact. They climb back down and make their way through the foggy passages. They still decline to explore the blood trough and make their way to the next chamber.

This room has a large, circular stone cap on the floor, like a big manhole cover, with an iron wheel in the middle of it. Belinda, Garrit, and Julius step onto the cap and turn the wheel in hopes of opening it (the wheel is very rusty and takes a combined STR of 20 to turn it).

The wheel does, in fact, open the cap, which flips 90 degrees and dumps all three of them into the 100-foot shaft beneath. Belinda and Mortimer, safely away from the capstone, watch with bemused horror. Belinda and Garrit make their saves manage to make their saves and catch themselves on the edge of the shaft. Julius isn’t so lucky. The plummets for 50 feet, gets lacerated by the crisscross of rusty razor-wire strung across the middle of the shaft, then falls the final 50 feet to crumple dead at the bottom of the shaft.

It was Julius’ player’s birthday, by the way.

Madline climbs down the shaft to retrieve her companion’s body and (more importantly!) to examine the stone coffin at the bottom of the shaft. She carefully removes enough razorwire for people to rappel down the shaft, then gets to examining the coffin.

The coffin sits in several inches of filthy black water but doesn’t seem to be trapped. She calls down Garrit and Mortimer while Belinda stands guard at the top. The three splash through the nasty water (save vs poison!) and bust open the casket. Inside is the decaying body of an ancient warchief. He wears gold braces etched with wolves, and his golden burial mask sports a large ruby! This is the biggest treasure haul the party has found  so far, which means it’s time to bug out and return to the village for now.