I got the chance to run Gorgon Crawl Classics at Spawn of CyclopsCon last weekend, and it went very well. People seem very interested and excited about mythic Greece DCC, and I may have to switch gears and focus on it more I initially expected!

I’m going to need to tweak the Hubris rules a little bit. There was a lot of Hubris getting tossed around, which was fun, but I’m not sure how sustainable it would be in a long-term game. I’m also going to start a GCC game with my Saturday online group (The Germans) so that will help hammer out the trouble spots. Man, actually playtesting things is weird new territory after 10+ years of game design.

Anyway, here’s the Satyr Class for Gorgon Crawl Classics. It began as a reskin of the Halfling, but quickly grew into its own thing. Want a fast-moving support class with some magical music powers? the Satyr is here for you! 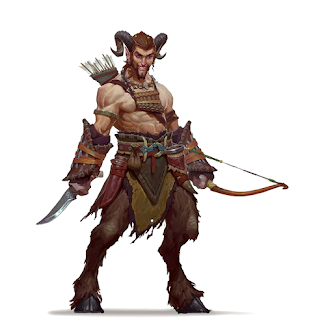 Semi-divine goat-people aligned with Pan and Dionysus. Yes, there are female satyrs (satyresses).

Beneath the Starry Skies: Infravision 60’

Goat Legs: Base movement of 40’. Greaves must be custom made, x2 cost.

Favors of Fate: Can spend Luck to benefit the rolls of other, non-satyr characters. Luck spent this way gives a 2-for-1 benefit and regenerates 1 per level per day. No benefit or Luck regeneration if spent on themselves.

Exaltation of the Gods: Can spend their own Hubris dice to benefit an ally’s roll. If any of the Hubris Die come up 6, the Satyr shares the same misfortune as their ally.