Persephone Sector is mostly human-centric, but these alien species are available as starting Player Characters. More aliens might "unlock" as the PCs encounter them. 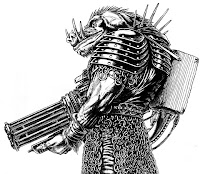 The “space orcs” from the Stars Without Number core book. They are the warrior-culture aliens familiar to any fan of Klingons or Luxans.

Home Planet: Like humans, the Hochog lost contact with their native planet during the Scream. They have large settlements on Uld.

Requirements: To be a Hochog, a PC must have a STR of 14+. You cannot be a Psychic.

Benefits: You get to be a bad-ass space-orc. Shout a lot and die for glory! 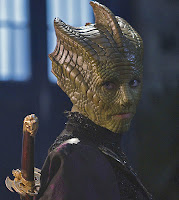 The Naga are androgynous, hermaphrodite reptilian humanoids possessing a weirdly exotic allure. In aeons past, the Naga had a shamanistic religious tradition. This tradition disappeared centuries before first contact was made. When humanity colonized Cedar, the Naga had no concept of religion or spirituality. They were fascinated by the idea, and rapidly embraced the teachings of the Temple of Babylon Eternal. The humans and Naga of Cedar have worked together to form a prosperous society.

The Naga are an introspective, casual race that values the pleasures of life and learning. Their reverence for philosophy and wisdom has kept their hedonistic nature from declining into decadence.

Benefits: You get to be an exotic/transgressive lizard person. 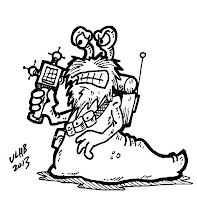 Yuglings
Yurglings resemble human-sized furry-faced slugs with high-pitched, grating voices. The Yurgling species possesses three sexes—an egg maker, an inseminator, and a womb-provider. Yurgling marriages are complicated three-way affairs. Partially due to the complexities of these triple-relationships, Yurglings have evolved to become the greatest traders, arbitrators, and contract lawyers in the Sector.

Yurglings cannot swim and have a superstitious fear of their planet's cold, salty oceans. When humanity first arrived on Yurgoloth, the Yurglings were more than happy to let them settle on the mineral-rich ocean. However, the yurglings charge the human settlements outrageous rental fees and taxes. They have wheeled-and-dealed human corporations for trillions of credits, and Yurgoloth has grown to be one of the richest planets in the sector.

Requirements: To be a Yurgling, a PC must have an INT of 14+. You can be any class.

Benefits: You get a +2 to saves against poison, but you cannot swim. Also, you get to talk like Gilbert Godfrey, Andy Kindler, and Eddie Pepitone.
Posted by Josh Burnett at 7:28 PM