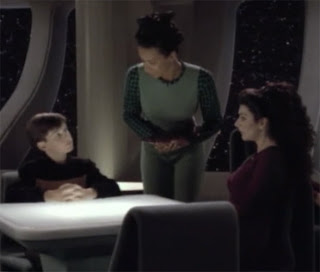 My wife Ivy and I have been marathon-watching Star Trek: the Next Generation this week, and something suddenly occurred to me.

"Damn, they eat a lot of ice cream on Ten-Forward."

That makes sense. I mean why build a perfect techno-socialist utopia if you can't eat as much ice cream as you want?

But that got me thinking. The Federation is a post-scarcity civilization. Within the Federation they have eliminated poverty, illness, or need. Money doesn't even exist. No one needs to work, but people do work. They have the luxury of taking the job they want.

And here we are on the Enterprise, at Ten-Forward, and there's someone (other than Guinan, even) taking some kid's ice cream order. Someone's dream job was to serve ice cream on a spaceship.

Ivy tells me, "Well, maybe they wanted to travel through space but didn't have the skill or talent to make it through Starfleet."

Now that's a compelling story! And here's the thing, you just don't start your food service career on the flagship of the Starfleet. No, this person had to work their way up. They had to start out as, like, a busboy on some tramp freighter in some backwater sector. The worked hard every day, slopping tables and serving synthahol to grumpy merchant marines, thinking "Some day... Some day I'll serve a banana split to Wesley Crusher."

Holy cow, where's that guy's story? Where's the movie, novel, or TV episode about that guy? I want to read that! Or better, yet, I want to play in that RPG! Heck, maybe I'll write it.

Email ThisBlogThis!Share to TwitterShare to FacebookShare to Pinterest
Labels: ramblings