I've got Carcosa on my mind lately...

I've been playing in an online Carcosa campaign for about a year now. For most of that time I've played a sorcerer. It's been fun, but to be honest, my PC never felt very sorcerous. A Carcosan sorcerer is, for the most part, just a fighter with a higher XP requirement, some slightly different saving throws, and the ability to maybe, maybe, cast one or two rituals over the course of their career. The ability to read the language of the Snake Men is occasionally useful, and my GM gave sorcerers a "Lore" skill that was handy, but without the ability to cast spells, sorcerers don't feel very magical. Sure, a sorcerer has access to rituals, but given the complex and specific conditions required to cast a single ritual even once, I can't imagine PC sorcerers ever get to use much actual sorcery. 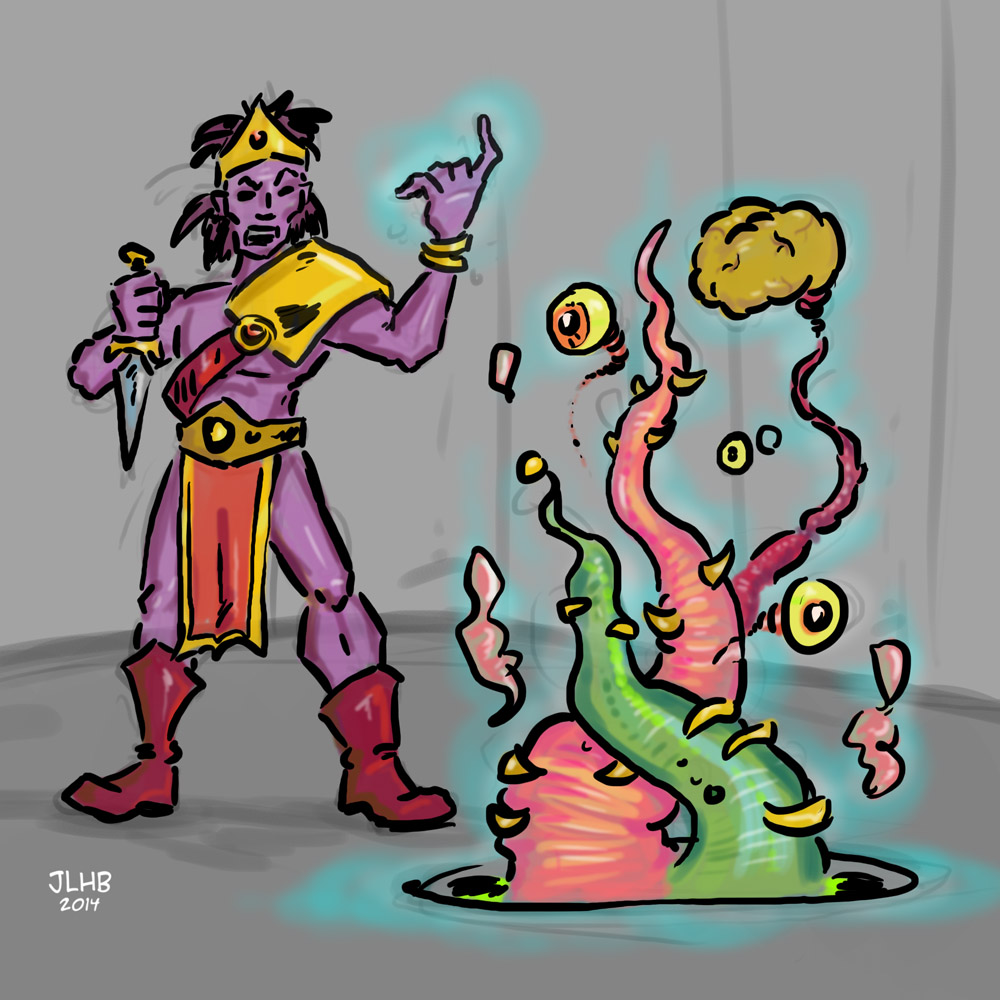 So, how do we fix this while still keeping the right flavor for our Carcosan sorcerer?

We could let them cast spells like a regular D&D Magic User, but I don't like that. I don't envision The Fate of Eternal Midnight tossing fireballs and magic missiles like Raistlin. The magic rituals of Carcosa specifically deal with summoning, binding, and banishing horrible monsters and alien beings.

Well now, that certainly sounds like the Summon spell from Lamenations of the Flame Princess, doesn't it?

A sorcerer dedicates himself to learning how to manipulate beings of terrible alien power. But before they can master these powerful rituals, a sorcerer must start small. The Summon spell lets a sorcerer call up a minor servitor of the Great Old Ones and (if he's lucky) bind it to his will for a short time. Ritual sacrifice makes this spell easier, which gives the neophyte sorcerer plenty of practice in being professionally unpleasant.

My Proposal: A Carcosan sorcerer can cast Summon a number of times per day equal to his "Lore" skill (or half his level, rounded down, if there is no such skill in your campaign). This will allow a PC sorcerer to actually sorcer once in a while. It lets them feel like more than just a learned fighter, and justifies their high XP requirements.

Given the inherent dangers of the Summon spell, a GM might decide to allow sorcerers to cast the Summon as often as they like. A sorcerer is very likely to get eaten before he breaks reality.

As an aside, if you're going to use the Summon spell (in any setting) I highly recommend +Ramanan S's Summon Spell Web App. It cuts down on a lot of rolling.