The Vaults of Man (an adventure locale for Carcosa!)

I haven't talked much about Geoffrey McKinney's Carcosa on this blog, but I absolutely love Carcosa, thanks in no small part to the excellent game +Doyle Tavener has been running on Google Hangouts for the past year.

I ran a one-shot of Carcosa for my home group a while ago, using a mini-map I made for this blog. This weekend I redrew the map and rewrote and expanded my game notes. Now I'm going to share it with you!

The Vaults of Man is a short little adventure location that can be dropped just about anywhere in Carcosa. It was designed to give the PCs a chance to find some weird things, fight some goopy monsters, suffer some traps, and maybe get a bit of treasure.

The entire adventure is below. You can also Download the PDF from Google Drive. 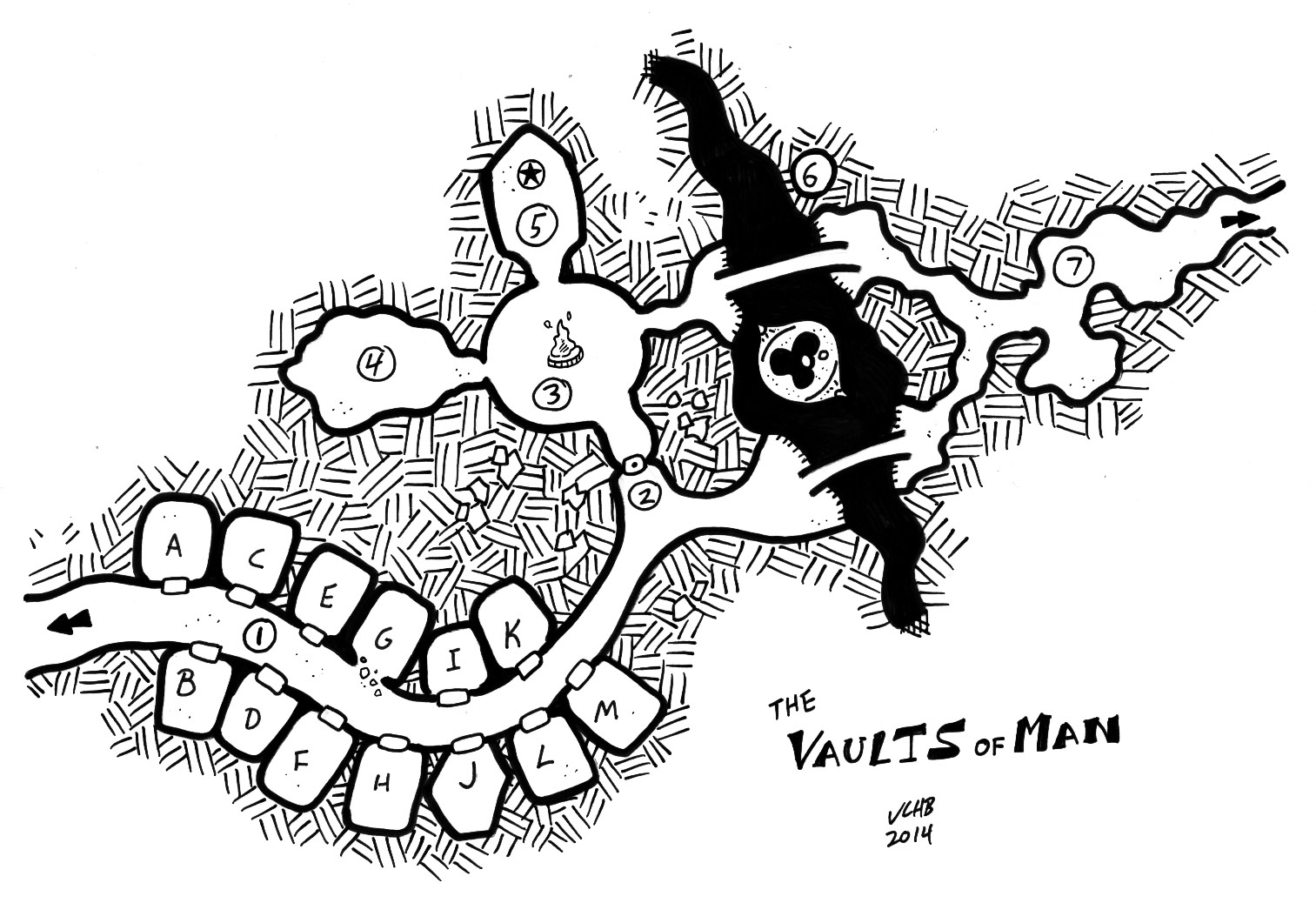 The Vaults of Man

The Vaults of Man are the resting place for thirteen ancient human heroes. No mortal being remembers their names, their deeds, or how they came to be buried here. Recently, the mummy Rama-Mekhet made his home in the chambers near the Vaults. In his solitude he continues his occult research and performs his obscene rituals to Nyarlathotep. He has little interest in the contents of the Vaults and has investigated them only slightly.

The Vaults of Man consist of thirteen tombs sealed with stone doors of different colors. The individual vaults vary in their exact dimensions but tend towards 16 feet wide by 24 feet long with 8 foot ceilings. The doors are heavy and thick but somewhat brittle with age. Each door requires a standard “Open Doors” roll to batter down. Characters can make multiple attempts to open a door, but each attempt takes one turn. Battering down a door is noisy and has a chance of attracting 1d4 of Rama-Mekhet’s Diseased Guardians.

A) Red Door
The skeleton of a Red Man lies on a plain stone plinth. He wears bone chain mail. A matched pair of bone short swords lie at his sides. If a character has a way to analyze the armor and swords’ material, they will discover that the bone originally came from this very Red Man, although his skeleton seems complete.

B) Blue Door
The desiccated body of a Blue Woman rests on a slab of baked clay. She wears a cloak of velociraptor feathers but is otherwise unadorned.

C) Yellow Door
An alien plant grows out of the skeleton of Yellow Woman lying in the rubble of a broken slab. A jeweled bronze longsword (worth 150gp) and spiked bronze shield are tangled up in the plant’s roots. The plant attacks anyone who comes near.

Alien Plant
HD: 3
AC: 16
Attack: (Thorn Lash x2) +3 to hit, 1 die of damage.
Move: 0’ (but its thorny vines can reach anywhere in the room)
A wounded character must save vs. poison or be implanted with seeds. These seeds will germinate in 2-8 weeks, bursting through the host’s abdomen, killing them painfully.

D) Green Door
The body of a Green Man lies on the bare ground, bound in elaborately-knotted ulfire twine. The man’s head has been removed and is placed at his feet. If rejoined to his body, the head shrieks the formula to Canticle of the Crawling God, allowing any sorcerer present to instantly learn that ritual. A non-sorcerer hearing this shriek suffers 1 die of psychic damage (save vs. sorcery for half damage). After shrieking, the body dissolves into powerful acid (3 dice of damage to anyone in contact).

E) Purple Door
The mummified body of a Purple Hermaphrodite lies on a baked clay slab. Their yellow silk wrappings have mostly rotted away, but the iron helmet with brass wings they wear is still in serviceable condition.

F) Orange Door
The preserved body of an Orange Man lies in a glass coffin filled with honey. He wears only a loincloth and holds an iron staff. Descent of the Six Thousand Steps is tattooed across the entirety of his skin.

G) Brown Door
The door to this room was battered down ages ago. The tomb is entirely empty.

H) White Door
The desiccated body of White Man in rotten cloth armor lies in a rusted iron coffin. If touched, the body instantly falls to dust and releases mutagenic spores. Everyone in the room must save vs. poison or suffer a mutation rolled from the GM’s favorite mutation table. The disintegrated body leaves behind two pearls worth 50gp each (the White Man’s gizzard stones).

I) Black Door
The rotting body of Black Man with four arms rests on a low wooden table. He clutches a lead-lined iron box holding a chunk of radioactive thorium to his chest.

J) Bone Door
The body of Bone Woman in rotten leather armor lies on a wicker bier. Her once-clear flesh is now milky and yellow with decay. Three plasma grenades hang from a rusted chain bandolier across her chest. The grenades inflict 3 dice of fire damage in a 10 foot radius (save vs. device for half). Each grenade has 1-in-4 chance of being a dud.

K) Dolm Door
The left half of one Dolm Man has been crudely stitched to the right half of a different Dolm Man. The composite body has been strangely mummified and lies on jagged slab of basalt. The body’s conjoined brain is still alive, immortal, non-psychic, and thoroughly insane.

L) Ulfire Door
The body of a Ulfire Woman, perfectly preserved, lies on an ornately carved plinth of pink marble. She wears a bikini made of gold coins (worth 100gp).

M) Jale Door
The decayed body of Jale Man lies in a nest of iron spikes. He wears lizard-skin trousers and clutches an obsidian-tipped spear to his chest. A ruby worth 150gp is hidden inside his abdominal cavity. 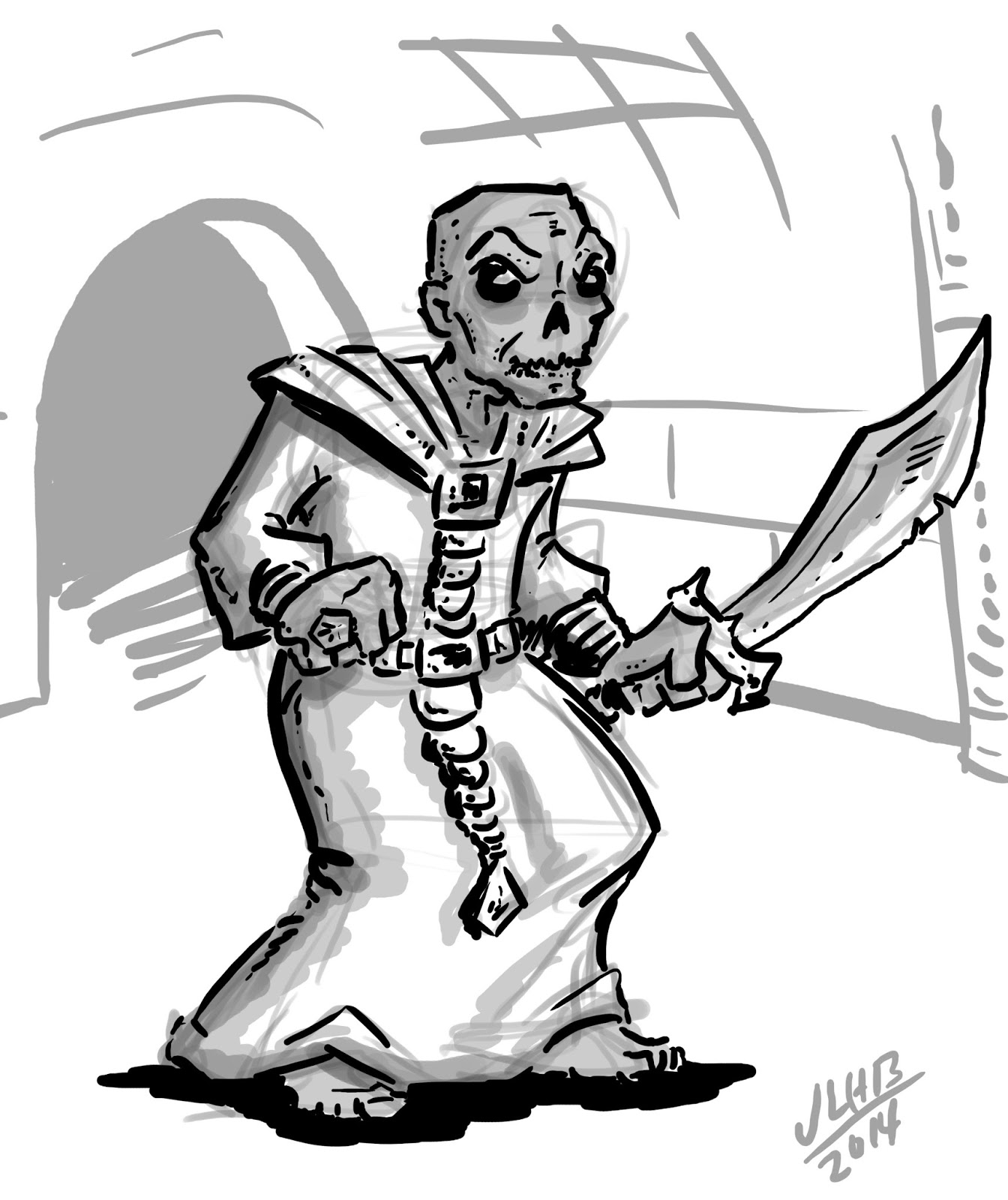 2) The Sanctum of Rama-Mekhet
The door to Rama-Mekhet’s chambers is made of dark green metal etched with golden pictograms in the ancient style of the Snake Men. The door will only open for someone possessing one of the weird seventeen-sided medallions of green metal carried by the mummy and his Diseased Guardians. Anyone wearing one of these medallions can pass through the metal door as if it were jelly.


3) Plague Chamber
A fire of jale flame burns in a pit in the center of this circular chamber. Rama-Mekhet’s eighteen Diseased Guardians (minus any already killed by the PCs) mill about the fire, wailing and gurgling alien songs in their pseudo-voices. They attack any interlopers.

Any food cooked over the jale flame becomes fatally toxic (no save).

Diseased Guardians (Carcosa page 82)
HD: 1-1
AC: 12
Attack: (Claws) +1 to hit, 1 die of damage. Save vs poison to avoid rotting disease.
Each Diseased Guardian wears an etched, seventeen-sided medallion of green metal that allows passage through the door to Rama-Mekhet’s sanctum.

4) Rama-Mekhet’s Laboratory
Rama-Mekhet’s lab is a collection of thaumaturgical devices and weird Snake Man technology, all beyond the ken of mortal men. An intricate wire apparatus hangs from the ceiling like a deformed metal spider. From this apparatus dangle thirty of the Snake Men’s multicolored lenses, used in The Many Octacled Binding. The mummy originally had ten Diseased Guardians bound to him. The other eight were created by the Guardians’ infectious attacks.

Rama-Mekhet is a haughty and arrogant mummy of middling power and influence. He mostly desires solitude and is outraged at the PCs' intrusion. He will allow the PCs to leave his sanctum unmolested if they agree to to give him one of their number to replace the Diseased Guardians they have most likely slain (“Quite the generous bargain, I’m sure you’ll agree!”). Rama-Mekhet wears regal robes of shimmering ulfire silk and wears a golden ring with a large blue gem worth 300gp. His leathery gray skin gives no clue towards his original color, and he has long forgotten.

The complete skins of a Brown Man and a Green Man are stretched and dried on frames hanging on the wall. The rituals Summon Diseased Guardians and The Many Octacled Binding are tattooed on these skins (brown and green, respectively). Diligent looters can find a canister of 1d4 alien health pills that heal all damage and illness when swallowed but require a save vs. poison to avoid mutation.

5) Shrine to Nyarlathotep
An obsidian statue or Nyarlathotep in his aspect of the Bloody Tongue rests on a squat stone pedestal. The statue weighs 120 lbs and is worth 500gp to a chaotic sorcerer. Lawful characters who sleep in the same room as the statue will be plagued by sinister whispers and distressing nightmares which prevent restful sleep and natural healing.

6) Chasm of Eyes
Narrow bridges of natural stone span this wide chasm. No one knows how deep the night-black chasm is, and characters who plummet into its depths are never seen again. Crossing the bridge isn't difficult in and of itself, but can be become a perilous combat location if the PCs are on the run from Rama-Mekhet and his minions.

Once one or more characters get about half-way across the chasm, a gigantic three-lobed yellow eye peers up from the abyssal depths, tracking the characters’ movement. The eye takes no other action and disappears if anything falls into it.

7) Lair of the Cybersnail
The caverns on the eastern side of the Chasm of Eyes are the territory of a steel-shelled Cybersnail, a bizarre bio-weapon from a strange age. The bear-sized mollusk never crosses the Chasm and Rama-Mekhet avoids its territory. The Cybersnail attacks anyone who invades its turf.