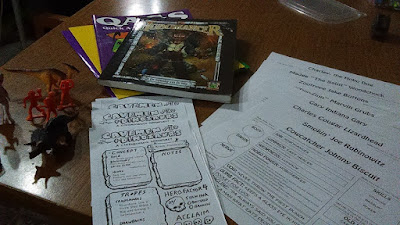 In a scant few hours I'm piling everyone into the Taurus and driving four hours to Gencon. Hooray! This is something like my fifth Gencon. Ivy and Erik have been to smaller conventions (1000 people or so), but this is their first Gencon. My wife and son are not adequately  prepared for the scale of Gencon. It should be an exciting time.

Ivy's peen invited to a Pokemon Go lure party and is attending a Werewolf LARP for Mind's Eye Theater. Both her and Erik Also have a lot of cosplay stuff put together. I expect Erik to find a group of teens and disappear pretty quickly. I hope to play in a couple of DCC tournaments, and I really hope to run into some of my G+ peeps. I'm very much looking forward to getting to sit around and talk with my friends for Hex Games who I only get to see a couple times a year.

As normal, I am running games for Hex Games. I'm running one Hobomancer adventure, and two Cinemechanix adventure. Cinemechanix is Hex's next big game that's currently in playtest and development. This, too, should be an exciting experiment.

Here's discriptions the games I'm running, along with the pre-gen character shhets. I try to give myself a theme each year with my characters. This year, each PC group includes an intelligent animal. I'm proud to say that all these games have completely sold out.

Hobomancer: Hobohemian Rhapsody
Pregen Characters
It’s the height of the Great Depression, and those all-American shamans known as Hobomancers ride the rails defending the soul of this great nation from all manner of supernatural evil. Winter means it’s time for all good hobos to settle into the cities and wait out the cold. But something uncanny is stalking the slums, and the snow runs red with hobo blood. It’s up to your brave band of Hobomancers to save the day once more.


The world died by nuclear fire in 1985. Two-hundred years later, humanity struggles to rebuild civilization beset by mutants, raiders, and the tortured Earth itself. When the settlement of Glass City is threatened by an atomic overlord, it’s up to an unlikely band of scavengers, psykers, and highwaymen to band together and save the day.

Pregen Characters
It’s a million years in the past. Mighty reptiles prowl the volcanic jungles of a primitive Earth while fur-clad humans lurk in caves and commune with tribal spirits. The Rains of Ash have come to your tribe’s small, once-fertile valley, and now the people starve. It’s up to you and your hunting companions to travel to the Valley of Giants and appease the fiery spirits that dwell there.

Email ThisBlogThis!Share to TwitterShare to FacebookShare to Pinterest
Labels: gencon