Today I continue talking about running Star Trek with Fate Accelerated. Let's get to some starships!

And once again, credit where credit is due...

Starships are created like Fate Accelerated characters. Thank you, Fate Fractal!
A Starship has aspects, refresh, stress, and consequences, but it has no approaches.

Aspects
A starship has four aspects

Approaches
A ship has no approaches of its own. Crew members will make all the rolls for their ship using their own Approaches.

Stress and Consequences
Like any character, the ship starts with 3 stress boxes and 3 levels of consequences. This is adequate for most cruiser-sized ships, the most common size of ship in Star Trek. Unusually large ships like a Borg Cube or the Doomsday Machine may have considerably more stress boxes, and maybe even an extra mild or moderate consequence available.

A starship starts with 2 stunts and can purchase more by spending Refresh.

Example Starship Stunts
Because our overcharged phasers are deadly at long range, our ship gets +2 to quickly attack  another ship that is at least two zones away.

Because our quantum torpedos devastate unshielded hulls, our ship gets +2 to forcefully attack another ship that currently has at least one consequence.

Because our starship has many luxury accommodations, the crew gets +2 to flashily create advantages while impressing visiting dignitaries and other VIPs.

Because our ship has expert emergency engineering crews, once per session the ship can clear out all its stress and/or its mild consequence.

Because our ship has reinforced shields, it has an extra stress box.

Because our ship has an advanced sensor array, it gets +2 to carefully create advantages when discovering aspects on a planet or another starship.

Because our ship has point defense lasers, it gets +2 to quickly defend against torpedoes.

Because our ship has a Romulan cloaking device, it gets +2 to sneakily create advantages related to stealth or invisibility. 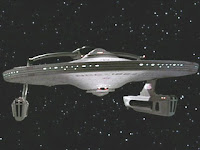 Stunts
Because the Avalon has an advanced sensor array, the crew gets +2 to carefully create advantage when discovering aspects on a planet or another starship.

Because the Avalon is fast and scrappy, the helmsman gets +2 to quickly overcome obstacles when moving from zone to zone.

Instead of statting out the complete bridge crew for an NPC ship, you can just give each important bridge position a score (captain, tactical, engineering, communication, helm). On the NPC ship’s turn, each position makes a roll using its score. Tactical makes attacks, and helm defends against attacks from other ships.

If your PC crew has less than five players, you might want to reduce the number of stations on an NPC ship, so your players aren’t outmatched.

An NPC ship should only have a Reputation aspect if the specific ship is notable for some reason.

Stunts
Because the Warbird has a Romulan cloaking device, it gets +2 to sneakily create advantages related to stealth or invisibility.

Because the Bird of Prey is equipped with disruptors, it gets +2 to sneakily attack while under the effect of a cloaking-based aspect.

Stunts
Because the Bird of Prey also has a cloaking device, it gets +2 to sneakily create advantages related to stealth or invisibility.

Because the Warbird is powerful and well-built, it has an extra stress box.

Because the Warbird is bristling with weapons, It gets a +2 to forcefully attack another ship under a “Focused Fire” aspect.

Stunts
Because the destroyer’s deflector screen are incredibly powerful, it gets +2 to cleverly create advantages when creating “Increase shield strength” or similar aspects.

Because the destroyer has powerful, long-range disruptors, it can make ranged attacks from up to 4 zones away, instead of 3.

Stunts
Because the scout ship’s hull is made of high-density trititanium, it gets +2 to carefully defend or overcome obstacles when resisting detection from ships’ sensors.

Because the scout ship can enter combat at Warp Factor 10, it gets +2 to quickly defend against beam and torpedo attacks.

Unlike personal combat, in ship-to-ship conflicts all crew characters on one ship will take actions, then the crew an opposing ship will act. To determine the turn order, the captains of each ship make Clever rolls. The highest result goes first, followed by the second highest, etc.

A ship can only make one attack roll per round. This attacks is usually made by the tactical officer and opposed by the target ship’s helmsman. Other crew PCs make create advantage or overcome rolls and take other support actions. Typical bridge orders like “Reroute power from lise support to phasers,” “Execute defense maneuver Delta,” “Readjust shield harmonics,” are all create advantage actions. Once every character has taken an action, that ship’s turn is over, and we go to the next ship in the turn order.


Zones in Space
Each zone is about 100,000 kilometers (about half the distance from Earth to the moon).
Starship weapons have an effective range of 3 zones.
Teleporters have a range of 1 zone.
Posted by Josh Burnett at 5:15 PM