Let's keep talking about Star Trek with Fate Accelerated. Any Star Trek game is going to need some badguys to torment your PC crew.

I put together a bunch of stunts to help make characters from some of Star Trek's iconic enemy aliens. I've also included the stats for mooks typical to each enemy. The Klingon and Orion stunts are re-posted from Part 1, Characters. Stats for enemy starhips can be found in Part 2.

Because I am physically stronger than a human, I get +2 to forcefully overcome obstacles or create advantages when using brute strength.

Because I have several redundant organ systems, I get a fourth stress box.

Because I am a space fascist full of plots and schemes, I get +2 to cleverly create advantages related to lies and manipulation.

Klingon Warrior
To live and die for the empire
Good (+2) at: Murder, Lies and Schemes
Bad (-2) at: Impulse control
Stress: OO 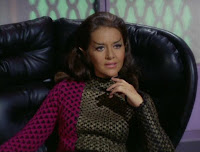 Because I command disciplined troops, I get +2 to cleverly create advantages when issuing orders to characters under my command.

Because Romulan disruptors are the deadliest in the galaxy, I get +2 to quickly attack opponents at least one zone away.

Because everything is going according to my carefully orchestrated pan, once per session I can automatically create an aspect (with one free tag) representing some contingency I had previously prepared for.

Romulan Centurion
Those who march under the Raptor’s wings
Good (+2) at: Disruptor fire, Working as a team
Bad (-2) at: Improvisational thinking
Stress: O 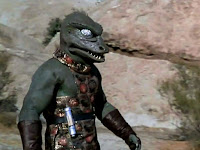 Because I have sharp claws and deadly teeth, I get +2 to forcefully attack in close combat.

Because I have thick hide and dense muscles, I get +2 to forcefully defend against physical attacks.

Because I am cold blooded and have a faint heat signature, I have +2 to sneakily overcome or defend against being detected by sensors and scanners. 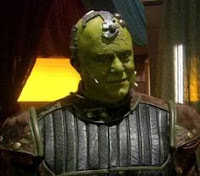 Because, as an Orion female, I produce irresistible pheromones, I get +2 to sneakily attack receptive males in social situations (consequences from such attacks will put the target further and further under the Orion’s sway).

Because I am a sexy beast, I get +2 to flashily create advantages in social situations where I use brazen physical seduction.

Because I am part of the Orion Pirate Syndicate, once per session I can locate an allied underground contact willing to give me aide and/or succor.