Our latest Silent Legions session was short, but our brave investigators wrapped up the Old Penderghast House case and started making plans for their next phase of investigations.

The Khamsa Society:
When we had last seen them, the PCs had just escaped the brass insects from Ligeia’s tomb Kelpiot and re-entered the house through the weird alien clock. They heard thumping footsteps upstairs and the heavy thud of something rolling down the nearby stairs. Reluctantly they looked, just in time to see Officer Park’s severed head roll down the stairs and come resting at their feet. Vinne was the only one brave enough to look up the stairs, while the rest of the team ran off through the back hallway to the kitchen and the cellar door. At the top of the stairs stood a horrible co-mingling of Logan and Mackenzie, their flesh run together like molten wax. The horrid thing walked clumsily on three legs. One arm ended in an iron fireplace poker. The other, elongated, double-elbowed arm ended in Mackenzie’s ruined head, her snapping jaw full of broken teeth. The thing’s horrid bruised flesh crisscrossed in glowing black-light veins. Vinnie ran to join his friends. (“Oh shit, guys. The monsters are Voltron-ing!”)

The team went down the basement and braced the door as best as they could. Thankfully the HCT is slow and clumsy, so they were safe for now. The alien key they found in Ligeia’s coffin opened the blue metal door quite easily, and the team descended into a sub-basement carved from the native stone.

In this new chamber, they beheld the strangest sight yet. A slab of obsidian the size of a large door stood against one wall. A cone of silver light shone through a paper-thin crack in the slab, filling much of the rest of the chamber. Inside the cone of light, caught in an area of slowed-time, Chase the cultist kneeled in a thaumaturgical pentagram, a sacrificial dagger of green glass frozen mid-stroke over the bound and gagged form of Ashley, the girl they were sent here to rescue. Bunny immediately leapt (ha!) into the cone of light to tray and tackle Chase, but she too was frozen in the cone of slowed time.

Careful investigation, some occult rolls, referencing The Hidden Abscess, and the use of some Expertise allowed the others to discover some things:


With clever use of ropes and sticks, the team manages to pull Bunny out. She only breaks a couple of ribs (I only rolled 3 on my 2d6 of unfortunate physics damage). They them lasso Chase’s dagger and pull it into his face, which explodes his head and disrupts the ritual. The Way seals back shut, and Ashley is saved.

Vinnie takes the traumatized Ashley outside to the car while the rest of the team set the house on fire (the ultimate goal of any horror game). Ashley is frantic and emotionally scarred, but Vinnie manages to calm her down by getting her sister on the phone and using some minor gas-lighting. 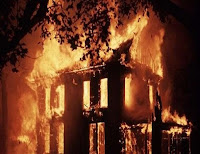 The teams hears police sirens in the distance (Officer Park has been missed), so they all decide to bug out. The house was condemned a long time ago, so the city decides to let the building burn.

The investigation of the Old Penderghast House is closed. Ashley has been saved, relatively safe and sound. The team has about two weeks of downtime. Lucian uses most of this time to study the spells found in The Hidden Abscess. Ashley’s sister Christine (the PCs’ friend who started this whole investigation) makes her way to Seattle, and decides to stay in town while Ashley recovers. Ashley is worried about Kevin, her recently-ex boyfriend who was supposed to be at the Old Penderghast House but never showed up. He’s fallen off the grid, and there’s no trace of him. Vinnie’s “Leading Whispers” ability reveals that Kevin was a newbie member of Chase’s cult. Finding him could give them valuable information about this cult and their activities.

Some critical rolls on research and computers manage to track Kevin’s cell phone to a hotel in Centralia, about an hour south of Seattle. The investigators have their next target.
Posted by Josh Burnett at 11:40 AM