Our brave, doomed investigators continued exploring the Old Pendergast House in our Silent Legions game. This time around we got our first case of delirium, as well as our first PC death. Now that’s a proper horror game! 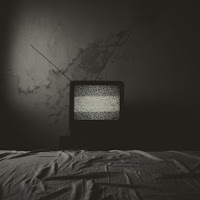 The PCs find an old black and white TV on a rolly cart. It’s screen flickers with static, even though the cord isn’t plugged in, and the house has no electricity besides. Fiddling with the antennas, the image becomes clear—a super-massive black hole in the heart of interstellar space. A subsonic thrumming grows louder as a crystalline mass appears in the center of the black hole. Vinnie and Veronica’s eyes and ears begin to bleed, and Vinnie shoots the TV.

The noise attract the Logan-Thing. The panicked PCs all hide in the closet and wait for him to shuffle away, anxiously clutching their limited weaponry. It was a high-point in my GM career.

Bunny finds the missing Ashley’s cellphone in the closet. Looking at her text messages, they discover that the girl just broke up with her weird boyfriend Kevin after he refused to show up for the party in the haunted house. He apparently skipped town and warned Ashley to get away from Amber and Chase. Ashley clearly didn’t take his advice. There’s also glitchy video of the sinister Chase using some incantation to pass through the alien metal door in the basement.

They find the remains of a burned journal in a fireplace. Scraps indicate that Penderghast buried his wife Ligeia somewhere on the property after her death. It also mentions that he and his wife trapped some eldritch creature in a prison Kelipot—some creature that serves The House of Broken Glass.

A skinless woman (Amber?) appears in a mirror. She grabs Vinnie and pulls him half-way through. Behind the mirror, he sees the horrible liquid-silver energy grid that forms the underlying foundation of the illusion we call reality. At the center of it all spins a crystalline mass that radiates contempt and hatred. Vinnie’s friends manage to pull him out of the mirror and shatter it. This ordeal costs him a ton of Madness, and the poor bastard develops an uncontrollable (if understandable) phobia against reflective surfaces.

They find a secret closet in the old study and discover an ancient book, L’abces Chache (The Hidden Abscess), that describes the nature of Kelipah and contains a couple of spells. They also find a blood-stained clay disk, The Talisman of the Stable Threshold, which they can use to counter the impossible geometry of the house.

All this time, Lucian has been posting photos and questions about the Old Penderghast House and the House of Broken Glass on occult conspiracy message boards. Someone called Anonymous Black has been deleting his posts followed by vague threats. A user on another forum, Occult_Warrior_17, warns them not to mess with “The House of Broken Glass” which the players eventually discover doesn’t refer to this house, but is actually the name of an alien pantheon of dead gods.

After dealing with more impossible geometry, the investigators encounter the Logan-Thing again. The monster is unstoppable. Bunny is beaten unconscious and Veronica is killed. (This was mostly due to simple bad luck on the players’ dice rolls. The Logan Thing only has 3 hit dice and his AC was the equivalent of a man in leather armor. All the PCs had weapons; they just could manage to roll anything higher than a 6.)

Lucian and Vinne drag their friends away from Logan, and Lucian uses the Talisman to stabilize the house’s geometry and put some distance between them and the monster. With dead and bloodied friends, they decide to get out of the house and lick their wounds.

After a day in the hospital, Veroinca’s replacement shows up. It’s Abigail Spencer, aka Occult_Warrior_17 from the internet! Abigail (Tough/Reporter) is a You Tube ghost hunter who’s tangled with the House of Broken Glass before when the rest of her ghost-hunting team was killed while filming in an abandoned asylum near Spokane. It’s clear that these people in Seattle need her help.

After resting up, the PCs go to the gun store and get some better weapons. They get a free MAGA hat with their purchase, but no one decides to wear it.

Back at the Old Penderghast House, Bunny climbs the porch to get directly to the attic window. In the attic she finds an old trunk full of Penderghast’s old adventuring gear:  pistol, bullet-proof vest, and MREs from the 1990s. She also finds a painting of Penderghast and Ligeia standing in front of the alien clock. Bunny makes note of the time on the clock face and heads back out the window.

That’s when the cop (Officer Park) drives by and asks what the investigators are doing standing around the abandoned house with a bunch of shotguns. The PCs panic and run into the house. Officer Park fires at them, misses, and follows them inside. They manage to lose him in the impossible geometry, and avoid a Scooby-Doo chase scene.

At the alien clock, they match the five clock hands to the time shown on the painting. A secret door opens in the clock, leading to a small kelipot that serves as (wait for it) the Tomb of Ligeia. It’s a pleasant place with vaulted stone ceilings, a grassy floor, and air that smells like honey. Tiny brass and stained glass insects flitter through the air. Ligeia’s pink marble coffin sits in the center of the chamber. Opening the coffin, they find the well preserved body of Ligeia holding a key made of the same blue alien metal as the door in the basement. Vinnie takes the key, and the brass-and-glass insects begin swarming and stinging. The PCs scamper out of the Kelipot and back to the house as the passageway closes behind them.

They’re back in the house. That’s when they hear a scream and a series of heavy thuds. Officer Park’s head rolls down the stairs into the foyer. The PCs hear the thump-drag of the Logan-Thing’s footsteps, and the session ended.
The game has gotten off to a good start so far. We’re playing again this weekend, and I’m confident the team will wrap up their investigation of the Penderghast Place next session, then move on to following up on all the hooks I’ve scattered through the adventure.