Daniel Sell's Troika! is really something special. I love the crazy, loosely-detailed setting that mish-mashes all sorts of psychedelic science-fantasy world-hopping weirdness. The whole thing encourages you to create your own new backgrounds for characters. So that's what I did!

The Hobomancer and Sneaky Snake come from the (Ennie Award-winning!) Hobomancer RPG and Hobomancer Companion that I helped write for Hex Games. I've written about Molemen on this blog several times, but they're inspired (shamelessly lifted) from John Hodgman's The Areas of My Expertise. And as for the Prodigal Vampire... well, I just like vampires. 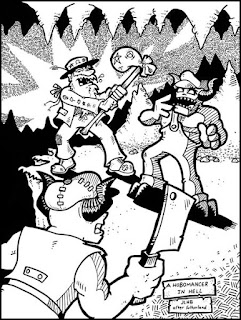 The Songlines span the entirety of the multiverse. The Hobomancers travel along this network of Creation energy, often on magical trains. Many of these trains find their way to Troika. As a hobo, you have forsaken your old name and taken up a life of travel and freedom. As a Hobomancer, you have been initiated into fraternity of wandering mystics and shamans, dedicated to protecting The Song.

Possessions
Advanced Skills
Special
When rolling into town, you can find temporary employment if you make a successful Luck roll.

New Spells
Mulligan Stew (2)
By mixing together a bunch of normally inedible items (shoestrings, empty cans, a rock, whatever you can find) into a pot of boiling water, you can create a tasty and nutritious stew. If successfully cast, the spell creates a number of provisions equal to your roll. The stew must be eaten within an hour or it turns into inedible slop.

It’s Right Here in my Bindle! (1)
Name a mundane, non-food, non-weapon item able to be held in one hand and worth less than a half a day’s wages. Make your spellcasting roll, and if you succeed, it’s right there in your bindle. 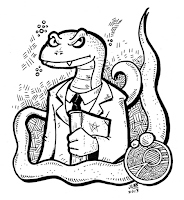 Your ancestors ruled over vast, interdimensional empires, commanding mighty golden armies of armored dinosaurs to trample fledgling human tribes. But your kingdoms fell into decadence and complacency. Loinclothed, sword-swinging human heroes toppled your onyx pyramids, shattered your temples, and trod your high-priests into the ground. Ten-thousand years later, the descendants of the fallen Serpent Kings still lurk in the shadows, practicing the arts of deception and planning for the return of the Empire. The Sneaky Snakes are almost ready to rise up again, and have been for several dozen centuries. 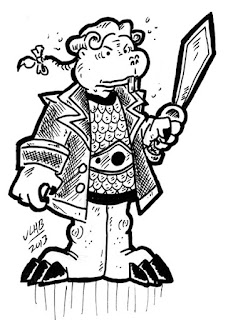 You are a native of subterranean realms. You have large teeth, tiny black eyes, and hairless pink skin covered with a thin layer of luminescent mucus. Despite your hideous appearance, you come from a sophisticated culture that values industry and learnedness. Your ideas of natural rights and representative democracy are alien to most other cultures.


Possessions
Advanced Skills
Special
Once per day, you can produce a wad of luminescent mucus that sheds light like a lantern. This light lasts a number of hours equal to your skill and can be stuck to any solid surface. 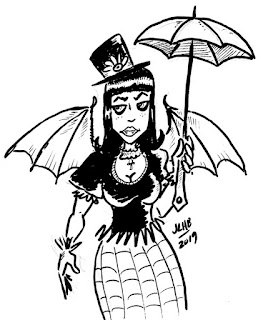 When the Sunshine Collective conquered the world of Chornabos, the vampire nobles that ruled the Black Cities were forced to flee in exile. Many of these displaced vampires settled in Troika. Now you’re trying to maintain your dignity and rebuild the network of influence and prestige that you once enjoyed.

Special
You cannot eat normal provisions. When you make a successful bite attack, you can choose to immediately slurp up some of your target’s blood (assuming they have blood). This doesn’t cause any extra damage, but you gain the benefits of consuming a provision (regain 1d6 Stamina). You can only feed like this three times per day (breakfast, lunch, and dinner).

You automatically fail any Luck rolls while you are exposed to direct sunlight. While in the smoky city of Troika, beneath the Hump-Backed Sky, this is rarely a problem, but keep your umbrella handy.
Posted by Josh Burnett at 6:13 PM