Read this article at BernieTheFlumph.com!

We got home from Gencon last night. Today is my recovery day, where I rest and recoop from the travel and convention hangover. For the past three years, I’ve gone to Gencon with my wife and kid as our family vacation. This year we shared an AirBnB with my Leopard Women co-author Leighton Connor and his family. It was a pleasant experience, and much more enjoyable than the cheap hotels we normally use. In brief, this was my best Gencon ever, with a lot of personal, professional, and emotional high-points. I feel somewhat guilty saying this, because for some of the other Hex Games folks, this was the worst Gencon ever.

For the past 5 years I've had emergency car problems the day before (or the day of) Gencon. This year we finally seemed to break the curse, as we had no car issues. I fear our bad luck may have bounced onto some friends, though. At 3am Saturday, the Extended Stay caught on fire, displacing over 200 people. Two of our Hex Games people both had rooms there. No one was hurt, but they ended up convention-homeless and wound up leaving early. Now the hotel and Expedia are dicking them over on refunds. It’s a pretty crappy turn of events.

But as I said, for me Gencon went pretty good. I’m going to go over the highs and lows with a series of bullet-points, because I’m still tired and don’t feel like writing actual prose. It's gonna sound name-droppy as hell, but seriously, these people all made my Gencon great.

The Recap...
The Connors and the Burnetts shared an AirBnB in town and used Lyft to go back and forth to the con. This turned out to be pretty cost effective and gave us all a lot of freedom of movement. A successful experiment I will use again!

I ran Hobomancers vs Dracula on Thursday with a group of repeat Hobomancer players. It went well. I’ve run Hobomancer games every Gencon for the last six years or so, and I think this might be my last one for a bit. I’ve just run out of ideas for it.

On Saturday I ran two sessions of Apocalypse Truckers using QAGS. I ran this once before at Archon, and these sessions both went nice and smooth with a lot of weird grindhouse action with truckers, Hot Wheels, and skin-eating alien demon mutants.

Aside from running, I got to play in three scheduled games this year—a Phantasmagoria DCC game run by Chance Phillips, Sword of the Jungle Deep (DCC) by Ian Smalls, a DCC Lankhmar game run by Michael Curtis. All great fun.

My wife and our kid are both cosplayers. They both spend most of the con running with their cosplay friends. We didn’t see our (adult-aged) kid for most of the con. My wife got a lot of compliments on her Captain Marvel outfit. I also thought her Yennifer was pretty cool.

I spent Thursday and Friday evenings at the Embassy Suites lobby hanging out with the DCC/DIY crowd. The DCC crowd are just simply the best. Friendly, supportive, and fun. Bob and Jen Brinkman, Dieter Zimmerman, Brendan LaSalle, and other people I’m sure I’m forgetting (apologies!).

On Thursday at the Embasy, I got to play in a pick-up game of Barbarians of the Ruined Earth, run by Mike Evans, with a table full of Ennie winners and noms. It was a great game. Mike is a very active and engaging GM, as well as being one of the friendliest guys you could hope to meet. Back his Kickstarter!

On Friday night I ran a Leopard Women of Venus funnel at the embassy for Justin Ryan Issac (the man with three first names!), Eric Bloat, and Leighton. This was the first-ever session of LWoV for DCC, and I’m happy to say it looks like a winner!

Throughout the week, I was very happy to have a several chances to hang out with Lloyd Gyan and Jim Ryan, internet friends that I only ever get to see at Gencon. I wish we had more time. I hope they come back next year.

By Sunday I was thoroughly exhausted and tired. So much so that I sadly had to forgo my Sunday evening game. There was simply no way I was going to survive until 7pm and still drive safely home. It’s too bad, too, because it was a Mothership game and I badly wanted to play.

I actually didn’t spend a lot of time in the Dealer’s Room. As expected, Goodman Games got the most of my money, and I bought some original art from Brad McDevitt, including the original Bathory piece from Draugr & Draculas. In addition to a couple of modules, I also now have a new DCC shirt, hat, and numchucks. I also had some nice conversations with Peter Mullen and Joseph Goodman. Have I mentioned how much I like the DCC crowd? (Is this what it’s like to be in a cult?) 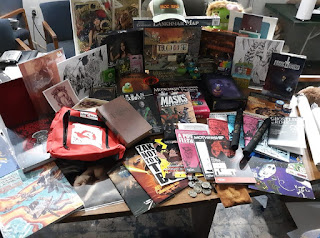 The picture to the right of our Gencon stash is going to make that previous statement look like a lie, but I swear to you most of that pile comes from my wife because women are always shopping, am I right fellas? *tugs at imaginary tie*

I don’t have a clever way to fit hum into a bullet point, but it was nice to sit and talk with Andy Davis for a while, too. Hi Andy!

Jarret Crader and I kept running into each other when I was in the middle of a game session or running to meet my Lyft. Sorry we didn’t get to chat more, Jarret!

Saturday night, The Hex Games crew and families left the downtown area to go have our “Staff Dinner” away from the press and scramble of the convention. It was nice to sit and relax for an hour or two at the steakhouse.

Leigthon and I passed out several dozen copies of our preview zine for Leopard Women, which got some very excited responses. That’s awesome! We have a limited number left, and I’ll figure out how to get rid of them relatively soon. Keep your eyes peeled.

I am very pleased that people are excited about LWoV, and I am very happy that people are still enjoying Sanctum of the Snail. I was walking on air for a lot of the week, and it was a great way to burn away the imposter syndrome. I’m fully charged, creatively, and I’m eager to continue my current projects and start up some new ones later.

I’m sorry if I forgot to mention anyone I met! My brain is still full of mush!

I’m sure I have a ton of email to go through, that I can’t possibly imagine getting to until tomorrow.

My next convention should be Acadecon in Dayton in November. Those three months are going to go by quick if I’m not careful. I’m also re-dedicated to finally make it to Garycon next year, but we’ll still have to see how that goes.