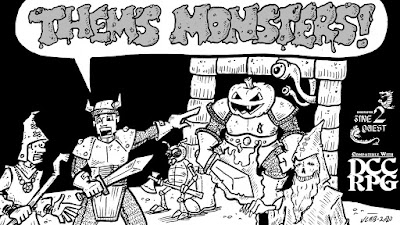 Q: What are those?
A: Them's Monsters!

In 2018, I put together a manga-sized zine called Them’s Monsters! that I passed out to people I met at Gencon (it’s better than a business card!). The zine was a collection of various monsters for the Dungeon Crawl Classics Role Playing Game. I’ve never officially published Them’s Monsters!, and that original print-run of 50 was all the world has even seen of it.

But now Zinequest 2 gives me the opportunity and excuse to share Them’s Monsters! with the wider world! The Zinequest version of Them’s Monsters! includes the original 10 monsters, several new ones, as well as new and improved art.

If you've enjoyed Sanctum of the Snail  or Draugr & Draculas, you're sure to enjoy this one as well. Check it out!
Posted by Josh Burnett at 6:49 AM