So my buddy Leighton Connor does this groovy sci-fi comic, Laser Brigade. I love it, and you should check it out. 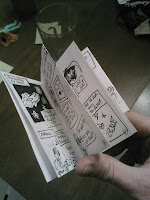 A while ago he asked a bunch of his cartoony friends (like me) to chose of the Laser Brigade characters and do a solo adventure comic about them. LC bade us draw our comics straight-to-ink, no pre-pencils or post-production, in these little 24-page 4"x6" sketchbooks, the same way he does his Laser Brigade comic. I was excited to play in LC's sandbox, so I did a comic about his character Thurl. In the comic, I introduced a couple of new characters, a psychic warrior named Vina, and a jive-talking robot named Roy.

Jump ahead to last night after work. I was waiting for my ride, and I had some time to kill. I had forgotten to bring my book, but I had some pens in my jacket, so I folded up a vacation request form and spent the next 30 minutes making a little pocketmod comic about Roy.

It was a fun little diversion. When I got home, I scanned the comic into my computer, used my layout program to add the pocketmod foldy-cutty lines, and turned it into a PDF. Now I'm going to share it with you! ENJOY!
Posted by Josh Burnett at 5:32 AM

Email ThisBlogThis!Share to TwitterShare to FacebookShare to Pinterest
Labels: comics, laser brigade, pocketmod, stuff i did, stuff my friends did