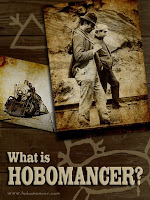 Hey! Hobomancer is up for an Ennie for Best Electronic Book! I helped write it, and it'd be amazing to win. Just thought you should know. I keep forgetting to mention it here.

But maybe you're curious as to what a Hobomancer game sounds like. Well you're in luck! If you go down to RPGnow, you can download a copy of the first-ever Hobomancer game.

You can hear Leighton Connor, Ian Engle, Steve Johnson, Carter Newton, Jason Whisman, and me create our first characters (in only 11 minutes!), bang out the basics of the setting, and go save a small town from an invasion of extra-dimensional monsters.

Every game starts out as an idea. And before that idea is ready to be turned into a book and published, it has to be tested. That’s why the Hex Games staff gathered together in Nashville back in May 2010, during the Great Tennessee Flood, and played the first ever game of Hobomancer (2013 ENnie Award nominee for Best Electronic Product). Fortunately they recorded the game session, and it is now available for download, absolutely free of charge.

When this game session took place there had been some general conversation and brainstorming about Hobomancer, but nothing was set in stone. As you listen, you can hear key concepts of the game being invented during play. You can also hear six people having a lot of fun.

The sound quality ain't great, as it was recorded with a hand-held MP3 recorder in a living room, but I think it's certainly worth a listen.

Download it Here!
Posted by Josh Burnett at 12:51 PM

Email ThisBlogThis!Share to TwitterShare to FacebookShare to Pinterest
Labels: actual play, hobomancer, stuff I helped with, stuff my friends did