Hobomancer is Nominated for an Ennie!!! 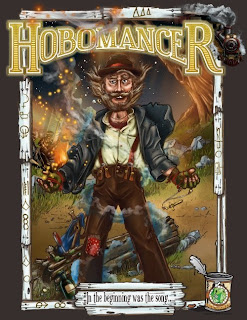 Holy cow! Hobomancer has been nominated for an Ennie in the Best Electronic Book  category!

Hobomancer is a historical-fantasy RPG from Hex Games set in Depression-era America. The hobomancers are shamans of the rails. They travel the railroads that crisscross the nation, fighting monsters, repairing dimensional rifts, and protecting the soul of America. It's a great game and I'm proud to be part of the creative team that also included +Steve Johnson, +Leighton Connor, +Carter Newton, and +Colin Thomas. Jeffrey Johnson created a wonderful, cover and Juan Navarro produced some marvelous illustraions, including my favorite, the Lord of Steam.

I wrote most of the monster section and contributed to several other parts of the book. I also did some illustrations and made the four-page intro comic, which you can read HERE.

Ennie voting starts July 22nd. It's a great honor just to be nominated, but to honest, it would be really awesome to actually win, too.

You can buy Hobomancer here.
There's a free preview here.
Posted by Josh Burnett at 3:13 PM

Email ThisBlogThis!Share to TwitterShare to FacebookShare to Pinterest
Labels: ennies, hobomancer, stuff I helped with