Abaddon, the map! (and some places of note)

I finished the map of Abaddon last night. I don't usually color my maps, but I'm pretty happy with how it turned out. As is normal for me nowadays, I stuck with the Jack Kirby color palette. With the groovy powers of modern technology, I was easily able to make versions of the map with and without a hex grid. 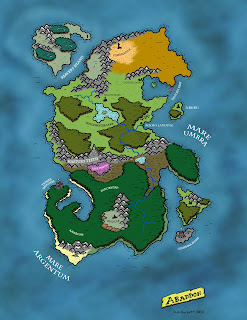 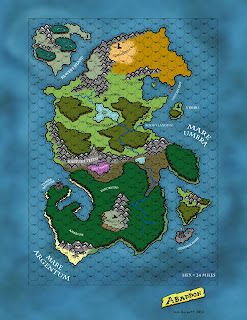 Here's some "known" information about some of the areas featured on the map.

Rook's Landing
The only Imperial settlement on the island. Founded three years ago by Lord Tiberius Rook.

The Duchy of Nightmass
Human lands ruled by Duke Xiro. In constant war with...

The Fleshlands
The land here is made of living, quivering flesh. It moans and screams, exudes random limbs and members, and excretes all manner of foul substances. A place of foul magic. The ruins of Mandraxis' manse is here.

Nibiru
This islands holds the ruins of an Annunaki city, ancient for eons.

Lake Venom
A massive lake of poison, surrounded by the Bone Shore. Home to trolls.

Three Witches
A trio of volcanoes, taboo and believed cursed by the local amazons.

And yes, the amazons ride dinosaurs.