Rook's Landing is the starting town for the PCs when they first arrive on Abaddon. Here's some points of interest, people to know, and a rough map of the town. 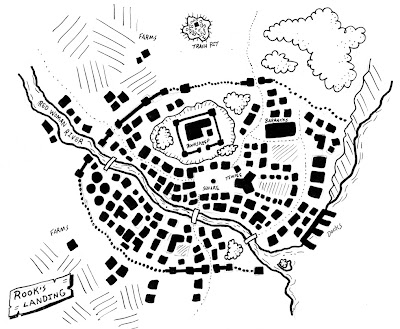 Rook’s Landing
Only permanent Imperial settlement on the island of Abaddon. Founded by Lord Tiberius Rook in 2173 (three years ago). Reclaimed an ancient keep of unknown origins on the east coast of Abaddon. Wooden palisades and ruined stone walls. Walls currently being reconstructed by dwarven stoneworkers. Farmlands and grainfields surround village.

Approximately 250 residents. Mostly farmers and fishermen. Many travellers and adventurers coming and going from the Imperial mainland.

Rookskeep
There is no more implacable foe of evil than a bad man gone good, and Lord Tiberius Rook (Fighter 9, Lawful) was a very bad man. He turned to the side of Law 20 years ago. Getting old. Shaky hands. Looks like Bill Nighy. His late wife, Marielle, is buried in a grand tomb in the keep. The senechal Cadmius (0-level, Lawful) keeps his lord’s manor running smoothly.

Temple of the Divine Couple
Harlowe and Daenae Argosia (Clerics 6, Lawful) are the husband-and-wife clerics of Bramah and Unastre, respectively. Harlowe’s voice is harsh and raspy, due to throat wounds. Daenae is missing her left eye. No potions to sell, but has holy water in steady supply.

The Sundered Shield
Jona Killwarrior (Magic User 5, Neutral) runs this inn and tavern with his wife Mara (0-level, Neutral) and their son Bolo (0-level, Lawful). Big burly man. Doesn’t put up with trouble-makers. Former adventuring companion of Lord Rook. Bolo wants to be an adventurer; his parents are dead against it. Old Tooley (Fighter 3, Neutral), the town drunk, is almost always here.

The Cock and Titmouse
Granger Redlock (0-level, Neutral) is a rough, aging woman with silver-red hair who runs the cheap, shady tavern down by the docks. Caters to sailors and vagabonds.

Town Guard
Katarina Steele (Captain 5, Lawful) is the commander of the town guard. She was a henchman of Lord Rook, and is very loyal. Steele is in charge of 12 guards (3 x Fighter 2, 9 x Fighter 1). Three shifts of four guards at any given time.

Hammer & Tongs Smithy
Groat Hammerlock (Dwarf 4, Lawful) runs this smithy with his husband Jimminy Tongs (Gnome 3, Lawful). Sells most weapons and armor from the core book. Hammer is a fine blacksmith. Tongs makes weapons and armor. They have four young 0-level humans as apprentices.  Hammer and Tongs have “adopted” a baby kobold named Hurgyip that they are convinced they can turn to the side of Law.

Stonemasons’ Guild
Lord Rook recently brought over a small coterie of seven dwarves to rebuild the curtain walls around the town. The dwarves are led by Gildura “Momma” Holdvault (Dwarf 6, Neutral). The guild hall has its own invite-only tavern, and does a side-business in gem trading and appraisals.

Docks
A small fleet of fishing boats leaves the docks every morning, led by Jenny Codsdaughter (0-level, Neutral) who took over for her father three months ago after he was eaten by giant eels. Ships coming and going from the Imperial mainland must check in with the dockmaster Janders Maderlay (Fighter 3, Neutral), a former pirate with a pet miniature flying squid.

The Compass Rose
Map shop and cartography run by Luminous Rose (Elf 5, Neutral). She often hires adventurers map out new and unknown areas. He homeland is a mystery, and no other elf has heard of her.

Rubbish Heaps
The town heaps its garbage in a small depression north of town. Volkar the Grooch (Grooch 6, Neutral) claims this as his own territory. He goes through Rook’s Landing every night with a large cart, collecting trash.

Yeastworms’s Quite Impressive Original Brews and Spirits
Hissskafluur Yeastworms (Moleman 3, Lawful) runs this brewery. He does a fine business in human beverages. He may pay adventurers good coins for exotic ingredients to make obscure brews.

The Mills
Zephram and Molly-Ruth Gristgrinder (Halfling 1, Neutral) and their 13 children run the grain mills on the south end of town near the river. Granny Gristgrinder (Halfling 6, Neutral) is over 100 years old and runs a bakery right next to the mills. Thanks to all the low-level adventurers travelling through Rook’s Landing, there isn’t a giant rat to be found anywhere in the mills.

Katzenjammer’s Thoroughly Modern Apothecary
Dr. Malachai J. Katzenjammer (Gnome 2, Neutral). Can identify potions. Has 1d4-1 potions to sell at any given time. Sells “Dr. Katzenjammer’s Excellent Rejuvenating Elixir” for 50gp a bottle (heals 1d4 hp, spoils in 7 days, may have other side effects).

Kale’s Livery
Hondo and Jasmeene Kale (0-Level, Lawful) run the stables and livery with the help of their five children. Horses are in short supply, but mules are readily available. Wa horses are particularly hard to come by, and are almost exclusively bred by Lord Rook.
Posted by Josh Burnett at 11:26 AM