A few weeks ago my home group started out new Dungeons & Dragons Fifth Edition campaign, using The Lost Mine of Phandever adventure from the starter set. It went great. I tweaked names, settings, factions, and props to better suit my campaign, but there's still plenty of spoilers for that adventure to be found below.

Vandalar and Skeld's players weren't able to make the first session, due to an unfortunate snow storm. We decided that their characters, too, were stuck in a blizzard (unusual for late-summer in the Marchlands.)

I gave each character a couple of rumors to help get them involved in the adventure and setting. This turned out pretty well.

Our heroes start in the city of Horizon in the Sundered Shield tavern. The master of the local branch of the Hrothgarem, Sondhiem Stonearm (an old dwarf with a rune-encrusted arm of living stone), has given them their first assignment. They are to assist the dwarf Gundren Rockseeker and his human associate, Sildar Hall, by escorting a wagon-load of supplies to the struggling mining town of Phandalin.

Gundren is short, even for a dwarf, with a great big hat and a massive red beard that hangs past his knees. Pretty much only his beady eyes and broad nose are visible on his face. Gundren covers their bar tab for the day and agrees to provide the party with a few healing potions, too.

Sildar is a lanky, bald man in his mid-50s with a massive handlebar mustache. He's a member of the Bastion (an organization dedicated to keeping the Marchalnds free of foreign influence). His chainmail is old but well-kept, and he carries a fine sword whose hilt bears the black bird symbol of Lord Rook (ruler of Horizon).

Gundren and Sildar head out for Phandalin that afternoon “to take care of business.” The PCs' wagon will be ready in the morning. They will pick it up at Runcible Hawk's General Sundries. They have a day and night to kill.

As a green gnome, Bramble can talk to small animals. She decides to spend some time talking to cats and recruiting them to the team. She finds two grubby alley cats living in an old storm drain—a scrawny gray thing named Mouser and a big fat orange cat named Fafhrd. She convinces them to leave the city with her “to go on an adventure. She has to take Mouser and Fafhrd's box of “cat junk” (old fish heads, bits of shiny foil, and unidentifiable clumps of fur and filth) with them. They are horrible, disgusting animals.

One of Digby's rumors mentioned the abandoned village of Thundertree and its infestation of undead. The wizard was able to sweet-talk the Horizon branch of the Compass and Tome society into letting him look at their maps until he finds the location of the old town.

With out paladin and cleric stuck in a blizzard, the party decides they needed some NPC back up. They convince Stonearm to assign them another unblooded Hrothgarem. Peitor “my friends call me Pete” Rabbitslayer, dual short-sword wielding halfling warrior, joins the team.

Pete is a curly-headed halfling with a face full of freckles and an upbeat “golly gee-wiz, buddy, I sure am glad to meet you guys!” attitude. And here is where I fall in love with 5th Edition as a DM. I am able to stat up Pete in about 30 seconds. +2 mod from Dex. +1 from Con. Fighter, two shortswords, scale mail, folk hero, DONE! 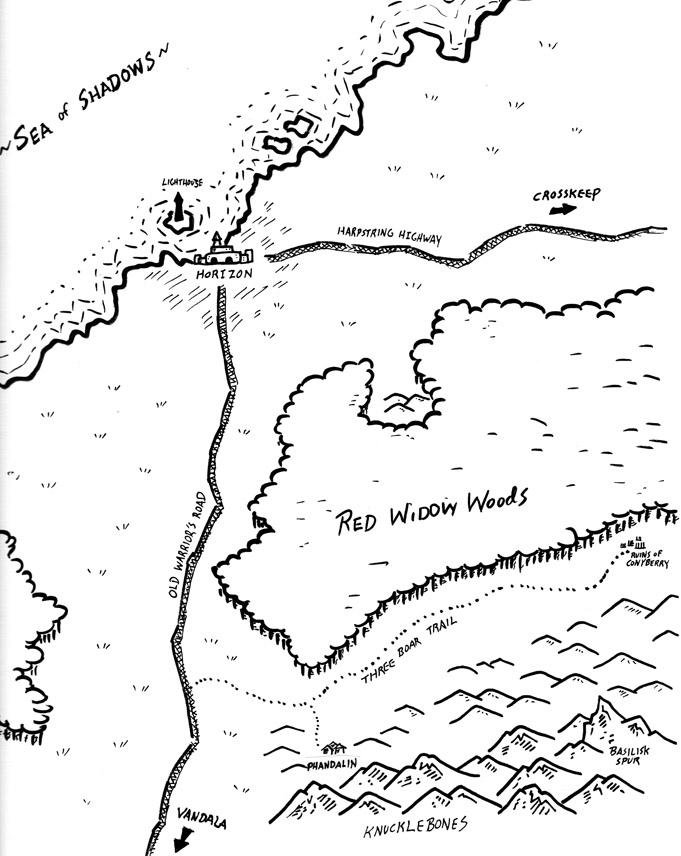 The next morning, the team, their new cats, and  their NPC buddy head out of town, traveling south along the Old Warrior Road. A couple days pass and they turn East onto the Three Boar Trail. They soon encounter the remains of Sildar and Gundren's horses, peppered with arrows. Before Bramble has a chance to talk to the carrion crows, they are attacked by Goblins!

Digby's glowing Mage Armor spell marks him as a spellcaster, and the goblin archers target him. The young wizard goes down with the first hit. A lucky 20 on his death save lets him instantly stabilize. Someone pours a healing potion down his gullet, and he's soon back into action.

The rogues lead one of the melee goblins into a sneak attack on the other side of the wagon, while Pete eviscerates another goblin with his short swords. Roanvine skewers an archer goblin with an  arrow. The once-again conscious Digby spots the second archer and zonks him with a Sleep spell. The team's first combat is tense, but quick, and now they have a captive goblin.

The team leaves the trussed up goblin with Pete and the wagon while they follow their trail back to their lair. They spot both the traps on the trail, but Roanvine accidentally trips the snare trap while he's trying to disarm it (natural 1) and has to cut himself down.

The goblins have made their lair in cave that turns out to be an ancient Dragonborn structure. The entrance is flanked by crumbling statues, and the once-precisely cut walls and floors have eroded to rubble. A wide stream passes down the main corridor. The whole structure appears to have once served as some sort of mill or refinery over a thousand years ago.

The PCs are about to enter their first dungeon. The cleric and paladin are absent, and the party left their NPC fighter back at the wagon. I give the players the option to quit for the night and wait until next session when their tank and healer are here, but they decide to press on. I am a bit concerned, because I have heard reports that this first dungeon can be a bit tough for new characters.

I needn't have worried. The two rogues, the wizard, and the ranger are all strained in Stealth. They go through the goblin lair like a black-ops team of Jason Bourne ninjas. They subdue the wolves with food and kind words, and split up the goblins and their bugbear boss using distractions and minor illusions. The party turns the goblins' clever “flood the chamber” traps against them, washing away opposition and weakening the bugbear enough to take him out with arrows and spells from the safety of the bridge above. Digby uses his familiar (Wyrd Owl Yankovik) to deliver touch spells with fly-by attacks. Brambles disguises herself as a goblin and lures monsters into kill-box ambushes. The dungeon assault is clever and exciting and successful. They have also managed to capture three more goblins.

The team rescues Sildar from the goblins. He tells them that the monsters have taken Gundren, his map, and all their gear (including Sildar's magic sword) to someplace called Cragmaw Castle. The team decides to take a long rest before continuing to Phandalin, so they use Digby's owl to send word to Pete to come to the caves with the first goblin captive. When Pete arrives, he is covered head-to-foot in blood and smiling widely.

“Golly guys, that goblin was sayin' just awful things about you. Also about your mother, Buddy. Also he tried to escape, yeah. So I had to kill him, y'know. Gosh I hope you aren't upset.”

The team is concerned about Pete.

The session ends, and everyone present hits level 2.