The Sneaky Snakes bound VLHRG the Time Wyrm in an attempt to rewrite history so their antediluvian empire never fell and the word remained under the thrall of those Valusian reptiles.

Thankfully, a plucky band of Hobomancers gathered the Cosmic Tchotchkes and brought them to the Infinite Switchyard, where they were able to banish VLHRG back to the Outer Dark.

One of the final threats the Sneaky Snakes brought against the Hobomancers was the Anthropic Manifestation of Shattered Time.  This creature is appears as an eight-foot-tall, vaguely-simian energy form made of shards of light, like stained glass swirling around a liquid silver core. 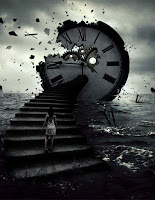 WWPHITM?: Undefinable.
Tagline: “Become unmade…”
Dumb Fact: He remembers you. You. The player. Everything about you.

Game Notes
•The Manifestation’s melee attacks have a Damage Bonus of +4. Targets of its attacks grow older or younger. If damage suffered by the target is an even number, it grows older. If brought to 0hp by even damage, the victim falls to ash and dust. If the damage suffered is an odd number, it grows younger. If brought to 0hp by odd damage, the target collapses into a pile of nonviable stem cells.

•The Anthropic Manifestation of Shattered Time has no solid form. Attacks from non-magical sources inflict only 1 point of damage on the Manifestation and cannot be increased with Yum Yums.

•As a “boss-monster” GMC, the creature’s “Time made manifest” Gimmick is broadly defined. It allows the Manifestation to manipulate time in weird and unpredictable ways. When used against another character, it can be resisted with Nerve or a magical-type job (Like “Hobomancer”). Example uses of the power include “Time Locking” a character to prevent them from acting until they can break free; forcing a creature to reroll a die or take a different action; or summoning temporal doppelgangers to help it in battle.

•As a magical creature of shattered reality, the Manifestation is weak against magic that builds, creates, or binds. When subjected to such magics, the Manifestation must make a Weakness roll. If the Weakness takes effect, it is not allowed to make any roll to resist the incoming spell.