Despite my lack of recent blog posts, I've still been gaming steadily. In my on-going Star Trek Fate Accelerated game, the crew of the U.S.S. Skipjack recently had to fight a pair of Mugatos in an alien arena. These dangerous beasts were very difficult opponents for a three-man away team accompanied by a quartet of redshirts.

From Memory Alpha:
Mugatos were large, intimidating animals that could reach a height of two meters (not including their horns). Covered by a thick pelt of white fur all over their bodies with the exception of their faces and hands, they were similar to the great apes of Earth in their physical proportions and prehensile hands and feet. All of their teeth were sharp and serrated and their fangs contained a strong venom that was fatal to Humans and inhabitants of Neural alike within a matter of hours. Mugatos had large, thick horns projecting from the top of their craniums as well as smaller spikes running down the spine. They usually traveled with their mates. 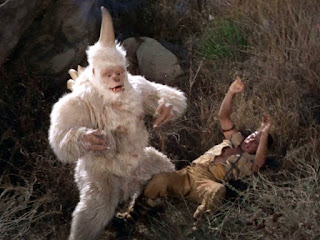