My home group started our new Silent Legions campaign this past weekend, and it got off to a pretty great start.  I decided to start things pretty simple, with a haunted house adventure (but not the “The Haunting” adventure from Call of Cthulhu). I found the floor plans for an old Queen Anne house on the internet and prepared myself by rewatching a lot of Lucio Fulci and Roger Corman films.

There are a handful of things I wanted to accomplish with this first adventure:


I'm fairly sure I accomplished most of these.

The Set-Up
On the very remote chance that you’re one of my players, don’t read this. It gives away backstory and secrets. 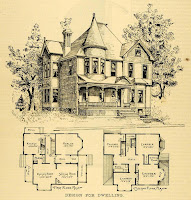 The Old Penderghast House has been abandoned for 20 years, ever since Alistair Penderghast died. Penderghast was an antiquarian and occultist. In fact, he was part of an occult investigation group, not unlike a party of PC adventurers. While exploring an alien kelipot he met and married a woman named Ligeia, an accomplished sorcerer. In the course of their adventures, Penderghast and his companions fought and barely defeated a Walker Between that was in the service of The House of Broken Glass (a pantheon of alien gods, and the campaign’s main antagonists). Ligeia trapped the creature in a small prison kelipot with its connecting Way in the basement of Penderghast’s home.

Even trapped in a kelipot, the Walker Between’s time and space warping nature seeped out of its prison, causing weird distortions in the house. While alive, Penderghast and Ligeia could counter this corruption, but it has gotten worse in the years since their deaths.

Fast forward to today, and the Penderghast House has been abandoned for two decades. It has gained a reputation as a haunted place. The surrounding neighborhood has degraded as a side effect of the low-level psychic miasma.

Chase Kinkade is a young but ambitious cultist of Dagh-Othyg-Zoag, the Autarch of Unknowable Waiting. In his research, he learned of the Walker Between trapped beneath the Penderghast House. If he can release the creature and bind it to his will, it will be a valuable asset to the cult, allowing them to rebirth their unmade god.

Chase befriends a group of impressionable college kids and invites them to a party at the Haunted Old Penderghast House. He plans on sacrificing one of more of them in a ritual to open the Way to the prison kelipot and free the Walker Between.

One of these college students in the sister of a friend of the PCs. She’s been missing for two days, and the PCs are asked to find her. Essentially our heroes will be investigating the aftermath of a teen slasher movie, trying to find their friend’s missing sister.

The Investigation
Our heroes, the Khamsa Society, consist of:
Right out of the gate, that's one hell of an investigation team.

Vinne gets a call from Christine Amberson, a friend of his from Atlanta. Her sister Ashley (a student at Washington State) has gone missing. On Friday, Ashley and her friends were planning on spending the night in the Old Penderghast House. Christine begged her not to go, but her little sister wouldn't listen. Now it's Sunday, and Christine hasn't heard back from Ashley. She begs Vinnie to try and find out what happened to her sister.

Vinnie gathers his spooky friends, and they immediately get to researching.

A bit of advice for modern-day campaigns. Your players will check the NPCs' social media. Make sure you have something  prepared to tell them. Luckily I did.

Checking Ashley's Facebook, they see her last post was on Friday night--a photo of her and her friends (Logan, Mackenzie, Amber, and Chase) in front of a boarded up old house. There's also several pictures of her and a guy named Kevin. On Friday night her relationship status was changed to "It's Complicated."

Digging up info on Alistair Penderghast, Lucian finds out that he was fairly well known in occult circles as a scholar and adventurer. After a long trip to the Levant, he returned with a mysterious wife named Ligeia, said to be an accomplished ritual magician. Ligeia died 25 years ago, but there are no records of where she was buried. Penderghast died 5 years later in hospital. The postmortem reports indicate that his eyes, heart, and tongue were removed with laser-like precision. No one knows how or why. With no heirs, the house reverted to the city. It's been condemned for 10 years, but the city has never gotten around to razing it.

The heroes head off to Lake City in north Seattle and arrive at the Penderghast House in the afternoon. The skies grow dark gray, and a miserable winter mix of rain and snow begins to fall. Checking around the house, they notice that the overgrown lawn hides many shards of broken glass, even though none of the windows are broken. The PCs find the kids' SUV and discover that the battery has been molten to slag. They also check out the old tool shed and find several drawers full of teeth and glass eyes. They pocket some of the eyes and teeth (just in case) and head inside.

Moving through the kitchen and pantry, they make their way to the dining room, where they spot a large faded rectangle on the wall where a paining obviously once hung. It's in the hallway, however, that they find their first really weird thing.

It's some sort of grandfather clock, eight feet tall and shaped like an isosceles triangle. It's made of a weird black material almost (but not quite) like metal. The clock face has 17 symbols, irregularly spaced, and not all numbers. Five hands slowly move around the face. The clock is disturbingly warm to the touch, and it's still ticking--arrhythmical, like a diseased heartbeat. The thing is too heavy even for Bunny to move. Lucian's EMF detector is going crazy, and when he tries to take a picture, the clock is glitched out and pixilated, even though the rest of the image is clear (1 madness). 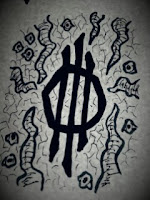 They move on to the living room, where they find the college kids' party site. Blankets, candles, empty beer cans and booze bottles, and a strange black ouija board with a razor sharp metal planchette. Instead of a lens, the planchette has a curious symbol: a rough circle intersected by thee parallel lines. Veronica recognizes this symbol as something she's seen in her dreams (1 madness). Lucian's UV lamp shows that there's blood on the point of the planchette.

That's when the heroes hear the shower running upstairs. The water in the house was shut off decades ago, so that's troubling.  Up the stairs they go, nervously. In the hallway outside the bathroom they see light and steam coming out from under the door (the electricity's been off for years, too) and hear a young woman singing. They knock on the bathroom door and call out. No answer. Steeling themselves, they enter the bathroom.

The well-lit room is full of steam, and the white and blue tiles are pristine. Behind the shower curtain, they see the silhouette of a curvy young woman bathing and singing to herself. Again they call out to the woman. Again no answer. Vinnie screws up his courage and pulls the curtain aside. Lying in the bottom of the tub is the body of a naked young woman--Ashley's friend Mackenzie. She sits in two inches of cold blood with a fireplace poker through her chest. The bathroom is dark. The tiles are all broken. There is no steam, yet the mirror over the sink is still foggy. Lucian notices that the words "HE WALKS BETWEEN" is written in the fog on the other side of the mirror. This double whammy of violence and horror nets them all 2d6 Madness.

As Bunny turns to leave the bathroom, she discovers that the door doesn't lead to the upstairs hallway, but to the downstairs dining room! (1d6 Madness.) A figure stands at the end of dining room. It's Ashley's other friend Logan. He's stripped to the waist, bloody, and holding a croquet mallet. His empty eye sockets are full of broken glass. "Logan" opens his mouth and lets out a sound like a wailing infant and a feral bobcat.

Vinnie opens fire and scores a head-shot! This absolutely fails to put Logan down. (Vinnie's player scored a Slaughtering hit, but semi-Logan is immune to slaughtering.) Bunny moves in with her baseball bat, but her wild swings fail to connect. Logan slams the croquet mallet into the side of Bunny's head, putting her down and knocking several parts of her skull loose.

With Bunny down, Logan turns towards the rest of the group. Vinnie's shaky hands cause his shots to go wide. The creature totally ignores the lines of salt and iron filings the Lucian spreads on the floor. Desperate, Veronica the street artist fishes her can of spray paint out of her bag and grabs her lighter. This makeshift flame thrower blasts Logan square in the face. The burning thing turns and runs with a shriek of pain, even as the can explodes in Veronica's hand, mangling her fingers (failed Luck save).

Lucian uses his first aid kit to bandage up Bunny. One eye is swollen shut, her nose is broken, and she's missing some teeth, but she's alive for now.

And that's where we stopped! My players had a great time, especially my son (Veronica's player) who absolutely loved the whole bathroom scene and the impossible architecture. This makes me especially happy, since he's the one who requested the Lovecraftian game in the first place. We got in some good role-playing and problem solving, and the players got properly spooked a couple times. It was one of the best first sessions I've had in a while, and I'm excited to continue.
Posted by Josh Burnett at 6:14 PM